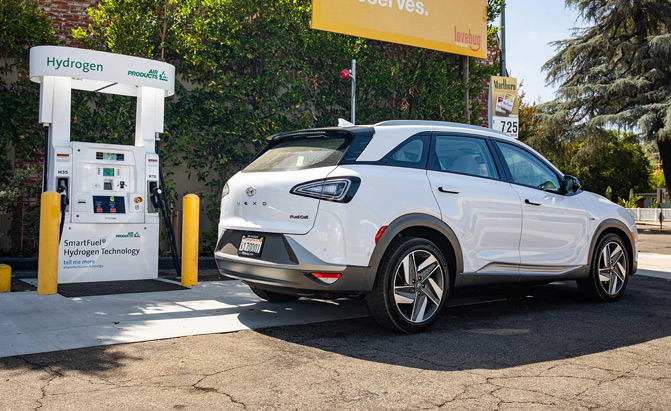 Hyundai’s latest hydrogen-powered vehicle is the NEXO, a versatile crossover that runs on nature’s lightest element and emits only water. It may be squeaky clean, but in reality, how safe is this gaseous fuel?

The idea of crashing a vehicle like this brings to mind visions of the Hindenburg, Nazi Germany’s rigid airship that crumpled to the ground in a pall of flames back in 1936. Despite this tragedy and public-relations black eye for hydrogen, it may actually be a safer vehicle fuel than gasoline.

For starters, the NEXO’s trio of storage tanks, which in total hold 41.4 gallons (156.6 liters) of hydrogen at more than 10,000 PSI (700 bar), are heavily reinforced to prevent puncture. Beyond that, they’re built to hold far more pressure than that. Mike O’Brien, vice president of product, corporate and digital planning at Hyundai said, “That tank will sustain, I think it’s over 12,000 PSI (827 bar),” which gives it a large margin of safety. Still not convinced that hydrogen fuel cell cars are safe? Well, fear not, because O’Brien isn’t done. “There’s been a number of manufacturers that demonstrate the robustness of their tanks. They’ve used armor-piercing, military-grade performance rounds,” he said. “Toyota did that, frankly, and I think you can go on YouTube and see that video.” He added that Hyundai engineers have conducted similar destructive tests on their hydrogen-storage systems to prove their robustness.

But perhaps the biggest advantage hydrogen has over liquid fuels is its ephemeral nature. “What you need to keep in mind,” explained O’Brien, “Is unlike gasoline, which puddles on the ground and remains a hazard, for hours, and hours, and hours, in the case of hydrogen, it dissipates in a fraction of a second. It’s gone.” What if electricity became the dominant form of motor-vehicle propulsion a century or so ago? Compared to internal combustion, it’s cleaner, provides instant torque and mechanically is far simpler. Imagine trying to sell motorists on the benefits of driving around with gallons and gallons of a highly flammable and potentially explosive liquid sloshing around in a tank under their feet. “There’d be all these hazards we’d be concerned with,” said O’Brien. “We just learned how to manage them and manage them in a safe way over years of experience and handling.” There’s no reason to think hydrogen would be any different, despite what you may have seen on the newsreels.