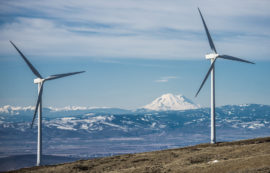 Washington State energy provider Puget Sound Energy announced this week that the second round of its Green Direct program has been fully subscribed, providing participating local councils and businesses with an opportunity to purchase 100% of their energy from local renewable energy sources.

Puget Sound Energy (PSE) announced on Tuesday that the second round offering of its Green Direct project had been fully subscribed, with participants benefiting from a mixture of wind and solar, including a 120 megawatt (MW) solar farm, Washington State’s largest such project. In addition, Green Direct is supported by the 137 MW Skookumchuck Wind Project which will be built in Lewis County, Washington. Further details about the project developers is not available, as of yet.

The Green Direct initiative was approved by the Washington Utilities and Transportation Commission (UTC) in early 2017 and presaged the first round which provided cities, government institutions, and major commercial customers with the opportunity to source their electricity from renewable energy sources. Companies sign long-term Power Purchase Agreements through the initiative to source renewable energy to meet all or part of their operations. Amidst the numerous cities and government institutions, big-name commercial clients including Starbucks and Target also signed up to the first round offering.

Green Direct led to Puget Sound Energy’s commitment to reduce its carbon footprint by 50% by 2040, which it announced in December of 2017. Specifically, the company committed to transitioning away from coal by the early 2030s after closing down several of its coal operations during the 2020s. PSE has also committed to securing renewable energy projects, building on the popularity of its Green Direct project.

Fast-forward over a year and Puget Sound Energy has announced that its second round offering has been completely subscribed, following approval from the Washington UTC. In addition to more local cities and government institutions — including the Washington Departments of Ecology, Health, Labor & Industries, and Social & Health Services — two big-name companies to join on to Green Direct include telecommunications giant T-Mobile retail megalith Walmart.

“Walmart is happy to join PSE and others in supporting the Green Direct program and the new renewable energy resources being supplied via the program,” said Steve Chriss, Director of Energy and Strategy Analysis for Walmart, Inc. “This initiative will play an instrumental role in Walmart’s efforts to increase our renewable energy use and enhance our ongoing sustainability efforts.”

T-Mobile, on the other hand, will receive enough clean energy to power its Bellevue headquarters with 100% renewable energy by 2021 — when the initiative’s latest solar project is set to come online.

“At T-Mobile, we really mean it when we say we’re going to clean up wireless for good … and in this case that means cleaning up our impact on the planet by making a BIG commitment to renewable energy,” said John Legere, CEO of T-Mobile. “We’ve put a stake in the ground to go 100% renewable by 2021 — because it’s the right thing to do and it’s smart business.”