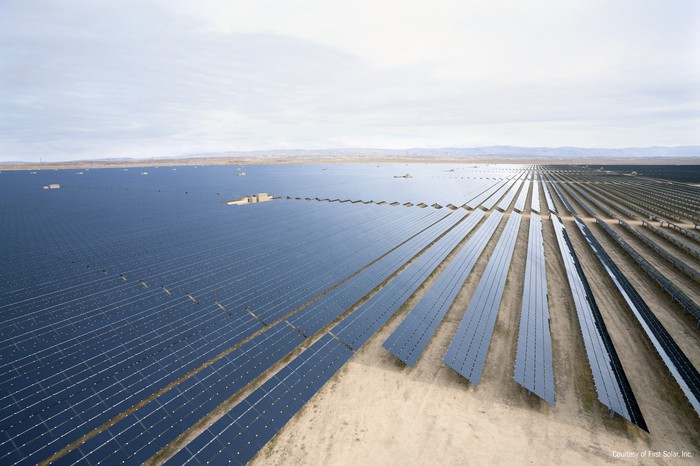 Solar power now accounts for around 1% of the world’s electricity generation, up from a negligible amount of solar capacity only a decade ago. But that’s just scratching the surface of the industry’s potential. Solar energy is the most abundant form of energy on earth, with enough solar energy hitting the planet’s surface every hour to provide for all of humanity’s energy needs for a year.

If the Energy Transition Outlook 2018 report from DNV GL, a quality-assurance and risk-management company, are true, solar electricity production could grow 65-fold by 2050, eventually making solar one of the largest sources of energy in the world. That presents a tremendous opportunity for long-term investors.

Solar and wind power together are projected to provide two-thirds of all electricity in 2050. Incredibly, this is expected to come at a cost saving, with energy expenditures as a percentage of GDP falling from 5.5% in 2016 to 3.1% in 2050. Wind and solar will actually save money for consumers as they grow.

Who is installing all of this solar energy?

Thirty percent of that 18,895 GW of solar energy capacity is projected to be installed on rooftops around the world. That presents a potential growth opportunity for a global rooftop solar leader like SunPower Corporation (NASDAQ:SPWR), which makes high-efficiency solar panels that pay more power generation on each roof. Since customers are willing to pay a premium for efficiency, SunPower can even charge more than commodity solar panel prices for its products, and that will help its economics as the industry grows.

What’s left is 70% of the solar market, which will be installed in large and small ground-mounted systems known as utility-scale solar projects. This is where First Solar (NASDAQ:FSLR) thrives as a solar panel provider, and Canadian Solar (NASDAQ:CSIQ) and JinkoSolar (NYSE:JKS) make solar panels and build their own projects.

We’ve seen the utility-scale solar business become highly competitive over the last decade, but First Solar, Canadian Solar, and JinkoSolar have a global scale few other companies can match, and that will be a competitive advantage in the long term. We’re also seeing them slowly upgrade the manufacturing process to higher-efficiency components (although still well behind SunPower), which will squeeze slightly more power from each acre of land and lead to a growing competitive advantage.

Can this turn around solar stocks?

Usually, an industry that’s expected to grow 6,500% over the course of three decades would be a big winner for investors. But solar stocks have struggled over the past decade as the sale prices for panels and projects have come down and put pressure on margins and over-leveraged balance sheets.

What I think we’ll see over the next decade is a few winners emerge and consolidate power in the industry around advantages like high efficiency or low-cost utility-scale solar technology. That’s why I think SunPower, First Solar, Canadian Solar, and JinkoSolar are set to succeed, despite a sketchy past of value creation for some of them. At least we know the industry is expected to grow, and investors will hopefully enjoy some tailwinds from that growth.