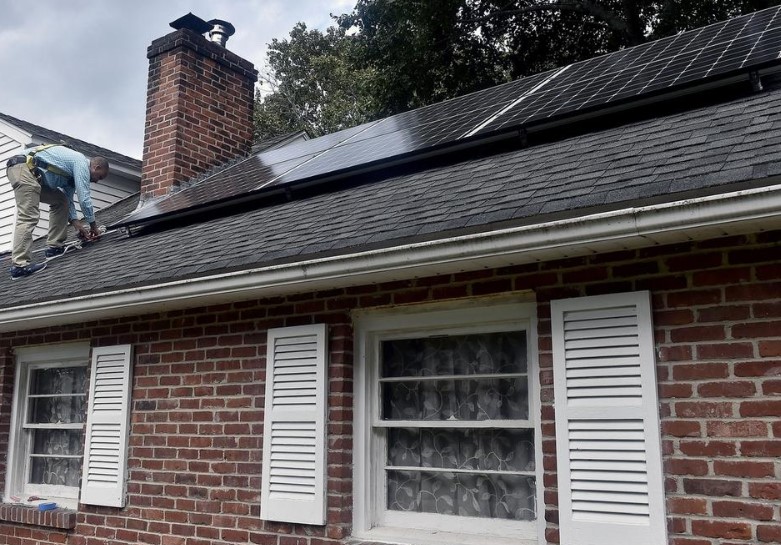 Norwich — Sam Hurst gutted his first microwave when he was 8 years old.

“I wanted to see what was inside,” said Hurst, 45, noting the project prompted a grounding from his parents. “I’ve always tinkered. I’m not a normal person.”

Whether a Volkswagen customized to run on canola grease, a self-installed woodstove for his Norwich home, or a lithium pack handmade with throwaway laptop batteries and charged with a flexible waterproof solar panel on his sailboat, Hurst’s tinkering continues to inspire homegrown green projects.

“Everybody in the family has asthma and allergies,” said Hurst, who’s married with three children and works as a Linux/Unix administrator with the defense technology company Northrop Grumman at the Naval Submarine Base in Groton. “There was a push later in life for me to try to be just greener.”

With solar costs much lower than when he bought his house in 2004, and with the federal government potentially growing more lenient on greenhouse gas emissions, Hurst says he was inspired to design, purchase and install his own rooftop solar energy system.

“The more coal plants that are out there, the worse our asthma is going to be,” he said, joking that his solar project could “undo 0.000001 percent” of the emissions produced by fossil fuel facilities.

The research, design and installation process took weeks, with Hurst taking advantage of California-based solar designer and manufacturer IronRidge and solar component wholesaler CED Greentech in Enfield. He also benefitted from his background in software and “building things and taking them apart,” from microwaves to car stereos to his own biodiesel home heating system.

The project’s permitting process, however, took more than four months, with a back and forth among Hurst, city officials and consultants on designs and specifications. Hurst awaits a joint inspection by Norwich Public Utilities and city building inspectors before he officially can turn on the 1.74-kilowatt system.

“You’re seeing leasing companies come in with their own architectural engineer and inspectors. They walk into the town and say, ‘This is what we’re doing, here’s your check and here’s our signatures,'” Hurst said.

Dan Coley, part of Norwich’s building and housing code enforcement team, said he didn’t recall anyone in the city ever trying a similar do-it-yourself effort.

He described Hurst’s installation as “a little more tricky” than the typical solar project, in which a solar company “has an engineer who works in-house.”

Coley said the city cannot rely on specifications provided by professional solar installation guide websites, so “we had to ask him to get some structural engineering and help from NPU and he did have to scale back the system.”

Hurst said he called a host of solar companies to ascertain ways to verify that his roof could handle his initial design, which called for nine panels totaling more than 2 megawatts. Eventually he found a California company called Solar Roof Check, whose professional engineers analyze the makeup and measurements of roofs and walls “and tell you if you’re in compliance or not.”

The engineers stamped off on Hurst’s project but only after recommending a drop to six panels, largely based on the age of his roof.

“When it comes through and it’s a stamped engineer, they are basically taking a little bit of the decision off our hands, saying it will work,” Coley said.

Coley added that professional engineers aren’t required for every building project, so long as they follow a standard or prescriptive method recognized by the state building code.

“There’s a lot of new technology and maybe 20 years from now … it will be easier for an individual to do it,” Coley said, noting the proposed 2020 state building code includes mention of solar shingles, panels on vertical walls and greater firefighter access to rooftops.

Not long after he received his final construction permit, Hurst hopped into a bucket truck, going up 50 feet to heavily trim a front yard tree and eliminate shading near his roof.

Coley said a “commissioning” — giving Hurst the OK to turn on the system and hook into the grid — should follow a joint inspection by NPU and building inspectors next week.

‘I’m in so much trouble’

When he first mentioned the project to NPU, Hurst said the utility asked him to come in for a meeting.

“I get there and it’s this big oval table,” he said. “And they’re sitting down with project managers and engineers and I’m thinking I’m in so much trouble just for bringing it up. And they say, ‘You want to go off the grid?'”

But he didn’t want to go off-grid; he just wanted to reduce his carbon footprint and save on his energy bill.

“We wanted to make sure, just like our other customers, that we could facilitate him but maintain the safety of our line crews,” said NPU Energy Services Director Jeff Brining, who oversees the utility’s solar program. “I don’t know anyone who has done it on their own, putting in a system such as this. It’s like getting your car worked on. Most of us don’t work on the car in the backyard anymore.”

Brining said NPU encourages customers “to get in touch with us early on in the process,” no matter the type of installation.

“There are lots of installation and financial considerations,” he said. “If we can provide that education up front, we can be helpful. Our first priority is safety. Second is customer service … and giving them what they want.”

NPU spokesman Chris Riley noted that while Norwich is a community of about 40,000, much of its housing stock is older and rental units, and many homes are not oriented for optimum solar coverage. Only about 20 NPU customers have installed solar panels on their roofs.

“But we are always anxious to work with customers, and it’s rare we work with one as enthusiastic as Sam,” Riley said. “We didn’t treat him any differently than other customers.”

All NPU customers benefit from renewable energy, Riley and Brining said. NPU’s electricity portfolio is about 20 percent renewable, with power generated by solar gardens and hydropower capabilities along the Shetucket River.

‘Bucket of money’ but long-term savings

Hurst spent about $4,200 on the project, an amount he said his wife, Hannah, a nurse earning her master’s degree, would describe as “a bucket of money” that could have gone toward other items.

The price tag included permits, stamps from licensed engineers, new tools and six American-made panels on racking engineered to handle snow loads and meet all grounding requirements in local and state building and fire codes. A microconverter turning DC power to AC is underneath each panel. In case of emergencies, the panels can shut down within 10 milliseconds.

Solar prices have dropped 47 percent in the last five years, according to the Solar Energy Industries Association. The SEIA says almost 70,000 Connecticut homes were powered by solar in 2017.

Hurst saved a little more than $1,000 by installing the system on his own. EnergySage, an online service that helps link customers and solar providers, says the market average for a 5-kilowatt system is about $15,000 in Connecticut; by comparison, a project of Hurst’s size typically would cost Connecticut homeowners about $5,220 through a standard solar company or installer.

Hurst will receive a 30 percent federal tax credit for the costs of solar installation. The system is not large enough to generate money but, based on the kilowatts that he injects into the grid, his family likely will save an average of about $45 to $50 a month on what is typically a $200 electricity bill.

It should take about five years for Hurst to see a full return on investment. If the solar panels knock an average of $50 off his electricity bills every month, the system could save him about $12,000 over 20 years.

Brining couldn’t provide exact figures in terms of kilowatt-per-hour savings Hurst might realize, noting savings for solar customers varies based “on what our avoided wholesale energy costs are from ISO New England,” the regional power grid.

“Whatever we save, they save,” he said. “We pass it through, one for one.”

Eversource spokesman Mitch Gross said the utility works with a “very, very small number of customers” who decide to perform installations themselves.

“Our interconnection approval process is the same for them, including getting approval from their town electrical inspector,” Gross said.

Same goes for United Illuminating customers, which include “a handful of do-it-yourselfers,” according to spokesman Ed Crowder.

“The process is no different than it would be for a contractor doing the same work, and our interconnection requirements would be the same,” he said.

Financial incentives through Connecticut Green Bank — launched by the state in 2011 to help fund residential and commercial efficiency projects, including solar installations — are not available to do-it-yourself customers unless they are eligible contractors working on their own home. Green Bank incentives are available only to Eversource and UI customers.

Ed Kranich, the Green Bank’s associate manager of statutory and infrastructure programs, said it’s uncommon for homeowners to install their own solar systems.

“If the homeowner is qualified and equipped to go do-it-yourself, they may find the savings outweigh the value of the rebate,” he said. “We encourage customers to do their homework and work with an eligible contractor listed on gosolarCT.com, and not to take on a do-it-yourself project beyond their scope of skills.”

Asked if he thought his project would inspire other crafty builders to install solar, Hurst said he already knows a few coworkers and friends who’ve been following his progress.