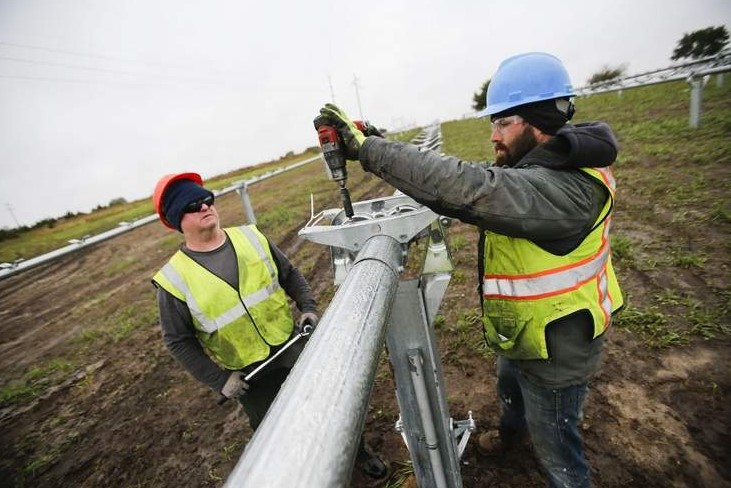 Solar panels paired with battery storage — a rare combination in Iowa, yet something energy advocates say is a game-changer for the state’s renewable energy market — are going up in southern Iowa.

Aurelien Windenberger, Ideal Energy’s director of design and finance, said Ideal Energy’s two Fairfield projects — one at Maharishi University of Management and the other at Agri-Industrial Plastics Co. — will research large-scale solar energy battery storage and how it can impact the electric grid and energy prices.

In a state that leads in wind power and holds considerable potential for solar growth, the possibilities are huge, Windenberger said.

“From our standpoint, we see battery storage as basically the last piece of the puzzle,” Windenberger said Friday. “It’s continuing to come down in price and once it gets low enough, it really complements solar and wind, these intermittent energy production sources.”

“We see that as becoming a huge component, and it’s going to be that last step that gets us to that clean energy future.”

With the addition of a lithium-ion battery storage system, Agri-Industrial Plastics’ 571-kilowatt solar array is expected to extend the array’s usefulness into the night and save the company more than $42,000 annually.

Maharishi University is installing a 1.1 megawatt solar array, paired with a 1.1 megawatt vanadium battery storage system. The project will use active tracking technology, which allows panels to follow the sun’s movement across the sky.

The project is expected to generate about one-third of the university’s electricity needs.

Renewable energy advocates say one of the biggest drawbacks to resources like wind and solar is that they can only generate power when the wind is blowing or the sun is shining. Meanwhile, the peak demand for most customers’ energy is in the evening, when the sun goes down and lights turn on.

“It’s one of the major drawbacks of solar, but now with batteries we can actually store that energy, and the price on that energy to store is dropping all the time,” Ideal Energy CEO Troy Van Beek said at last month’s Iowa Ideas Conference in Cedar Rapids. “We can store it when it’s less expensive and sell it back when it’s more expensive.”

Through a process called “peak shaving,” batteries can store energy that is distributed during high-demand times, such as summer afternoons, when the cost of energy is its highest. By shifting to stored power during those times, customers could save money on their bills.

What’s more, Megan Dyer, engineering solutions manager with Alliant Energy, said the ability to store electricity for peak demand could have major implications on the power grid, which she said is built to the maximum energy need.

“Solar by itself, wind by itself, not paired with battery storage, really didn’t provide a lot of options when it comes to managing that peak. So now we get to think differently,” she said during last month’s Iowa Ideas Conference.

“This truly could be a very significant game-changer for Iowa,” Laraby said.

“Missouri and Illinois are both really incentivizing solar so a lot of companies are pushing out into other states, and there’s a lot of opportunity for us to develop right here in Iowa,” he said.