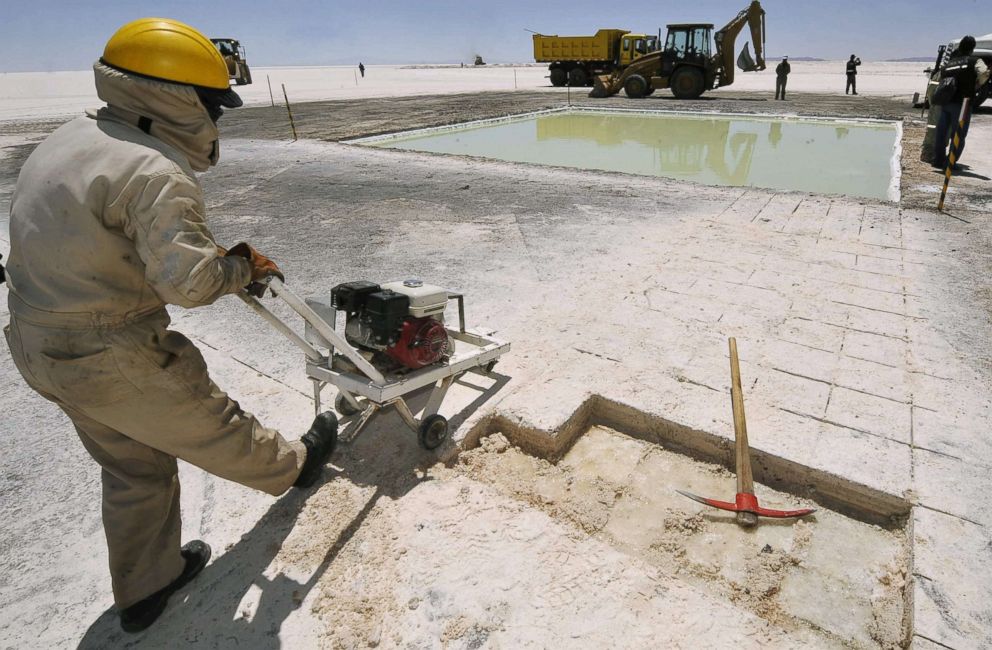 Near the crest of the Andes mountain range in Bolivia lies the Salar de Uyuni, the largest salt flat in the world.

The stunning location is a growing international tourist destination and was recently used as the setting for an epic battle scene in “Star Wars: The Last Jedi.”

What can at times look like a snow-covered wonderland is actually several dried-up, prehistoric lakes that formed salty pentagon patterns on the surface. But beneath the crust is lithium, the precious metal element, that could potentially provide a better economic future for Bolivia.

“Nightline” traveled to the Salar de Uyuni to get a closer look at the 4,500 square miles of the world’s largest deposit of lithium, which powers batteries, electric cars and phones. For perspective, the Salar is nearly 100 times larger than Utah’s Bonneville Salt Flat.

As one of the poorest countries in South America, Bolivia hopes the global need for the element will revolutionize its economy and it’ll become “the Saudi Arabia of lithium.”

The Salar’s barren landscape is a robust worksite where families have mined salt for generations.

Two brothers, Moises and Erick Chambi, are known as “saleros” or salt pickers. Their work is physically demanding. They chop, saw and stack salt blocks directly from the earth’s crust for sale across Bolivia.

“(The Salar is) not 10 or 20 years (old),” Moises Chambi said while pointing to lines in the salt blocks. “This is the accumulation of thousands of years.”

He explained that the brown lines between the layers of salt were indicative of periods of flooding in the Salar and, similar to rings of a tree trunk, each spaced out area could span hundreds of years.

Running his fingers along lines in the ground, he shared that “the Salar is like a human being that breathes through these cracks,” Moises Chambi said. “It’s also like a living plant. That’s why we also have to respect it and take care of it. For us it is sacred.”

Consumers across Bolivia once sought out the Chambi brothers’ business, but these days the product mostly goes to making salt licks for cattle and bricks for construction.

The Salar’s popularity with tourists has been a boon for local hotels, especially ones made of the Salar’s most popular ingredient. The exquisite five-star Luna Salada and Palacio de Sal hotels have walls, floors and furniture made entirely of salt detail and salt blocks, similar to those sold by the Chambi brothers.

They sell each of their salt bricks for about 50 cents and while it won’t make them wealthy, it is enough to support their young families.

The plant exports the natural resource for roughly $25,000 per ton to a number of countries, including the U.S., Russia and Japan.

Marco Antonio Condoretty, head of implementation and engineering, oversees each step of the production process and gave us a tour of his site.

Wells tap nearly 100 feet deep to source the Salar’s lithium-rich brine, running it through a system of pipes that span miles into one of the plant’s many pools.

The brine sits in those pools for approximately six months where the sun and constant wind help separate lithium from the salt and other impurities through evaporation.

In one of the final stages the lithium gets processed and separated from another by-product: potassium, which the plant also sells.

This factory is projected to process 200 tons of lithium in 2018. That number will explode by nearly 750 percent to 15,000 tons when a neighboring government plant wraps construction next year.

Despite some concerns that lithium processing could take over the Salar, Condoretty assured that this vast location will remain largely unaffected. “The lithium we take out now is very little. Therefore if we are going to expand, we are not going to affect the Salar.”

In fact, only up to 4 percent of the Salar has been set aside by the government for mining and processing, he said.

Due to the plant’s remote location, it is also home to its employees who live on site for two weeks at a time, followed by a seven day break. To keep plant employees busy and healthy, the location offers a hangout area and workspace, including a gym, pool tables, even a clinic.

As for the living arrangements, Condoretty said employees share their living quarters, sleeping in shared rooms like dormitories that sleep up to three people per room.

The entire plant is proudly run and operated by Bolivians only, with, until very recently, foreigners completely shut out of development and production. That’s because Bolivia is holding fiercely on to its natural resources, limiting foreign involvement following centuries of foreign exploitation of its silver, gas and oil.

Condoretty acknowledges this may have hampered their production and ultimately, their sales, but claims “we are doing it ourselves. This means generating income only for Bolivians. Our achievement is that it took us longer, but we [are the ones who] did it.”

Despite its previous heavy emphasis on limiting foreign involvement, the plant recently announced a $1.3 billion dollar deal with a German company, ACI Systems, to expand local production. With a 51 percent majority stake, the new deal adds promise to Bolivia’s gamble that lithium could one day lift its economy.

And as the global demand for lithium-powered lives seemingly increases daily, the future in the Salar de Uyuni seems brighter than ever.