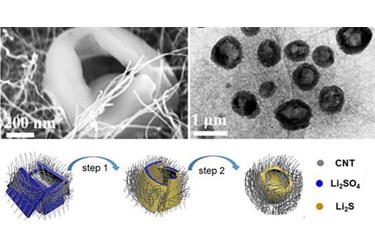 A “high performing”, doughnut-shaped active material structure inside a lithium-sulphur battery has been developed by the Korea Advanced Institute of Science and Technology (KAIST).

This lithium-sulphur (Li-S) battery has a higher energy density and lower production cost than a lithium-ion battery (LIB), according to KAIST. Therefore, it can be used in electric vehicles (EVs) that need a longer battery life.

Unfortunately, Li-S batteries are still incapable of providing a longer lifecycle due to the poor reversibility of the lithium metal cathode. To combat this problem, the researchers used lithium sulphide (Li₂S) cathodes and combined them with graphite anodes to enhance energy density and lifecycles for the batteries.

Li₂S is expensive and as such there has not been an electrode architecture and electrolyte design that enables a longer lifecycle between the graphite anodes and lithium sulphide cathodes – until now.

The team produced its Li₂S cathode active material from low-cost Li₂S developed from raw materials. They have also developed a Li₂S ion battery with a graphite anode and Li₂S cathode using a high concentration salt electrolyte.

The team say they achieved 30% higher energy density than that of conventional LIBs and secured a lifecycle of more than 600 cycles.