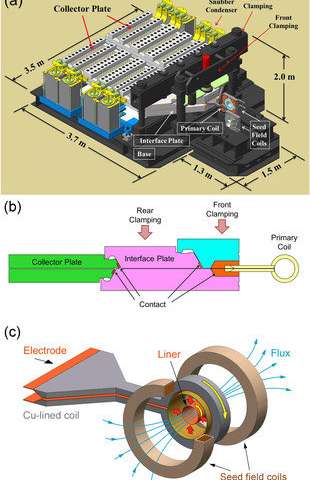 A group of scientists at the University of Tokyo has recorded the largest magnetic field ever generated indoors—a whopping 1,200 tesla, as measured in the standard units of magnetic field strength.

By comparison, this is a field strength about 400 times higher than those generated by the huge, powerful magnets used in modern hospital MRI machines, and it is about 50 million times stronger than the Earth’s own magnetic field.

Stronger magnetic fields have previously been achieved in outdoor experiments using chemical explosives, but this is a world record for magnetic fields generated indoors in a controlled manner. That greater control means the discovery could open new frontiers in solid-state physics, perhaps allowing scientists to reach what is known as the “quantum limit,” a condition where all the electrons in a material are confined to the lowest ground state, where exotic quantum phenomena may appear.

The high magnetic field also has implications for nuclear fusion reactors, a tantalizing if unrealized potential future source of abundant clean energy. To reach the quantum limit or sustain nuclear fusion, scientists believe magnetic field strengths of 1,000 tesla or more may be needed.

The experiments that set the new world record are described in an article appearing this week in the journal Review of Scientific Instruments, from AIP Publishing.

The work opens up a new scientific horizon, said Daisuke Nakamura, first author on the paper, and “has pushed the envelope for ultrahigh magnetic fields.”