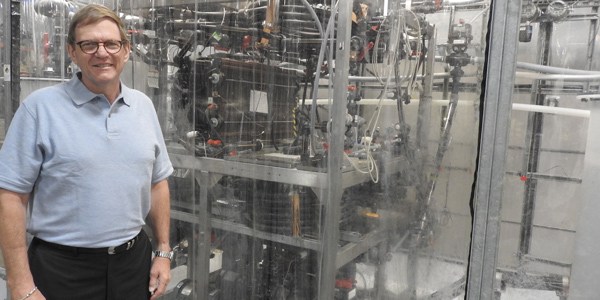 The company was the prime recipient of an $875,000 Massachusetts grant awarded to an application team that also includes Vionx Energy, Worcester Polytechnic Institute and the Energy Initiatives Group.

Carlos Nouel, vice president of innovation and development at National Grid, told RTO Insider that “the Shirley project will serve as a test bed for integrating storage and solar through the use of flow batteries, and support the development of new frameworks for dispatching stored solar power.”

Massachusetts lags far behind California in deploying utility-scale energy storage, but it is trying to integrate the technology into its power supply.

California utilities must procure more than 1.3 GW of energy storage by 2020. As of August, the state’s three largest investor-owned utilities are in the process of actually procuring nearly 1.5 GW, with about 332 MW currently online, according to a report last month by the California Energy Commission.

In contrast, Massachusetts last year said the state’s utilities must procure a combined 200 MWh of energy storage by Jan. 1, 2020. ISO-NE in April reported more than 500 MW of storage capacity in its interconnection queue. (See Overheard at the Energy Storage Association Annual Conference.)

Vionx (rhymes with “bionics”) is supplying the energy storage system for the Shirley solar project, which lies about 30 miles west of the company’s lab and headquarters in Woburn, Mass.

The company uses vanadium rather than lithium for energy storage, seeing the alternative flow battery technology as the best fit for utility-scale applications, including microgrids or industrial, behind-the-meter systems.

The use of vanadium in a flow battery was first explored in the 1930s and only made workable in Australia in the mid-1980s. Today, many companies use the technology, from giant Sumitomo to tiny CellCube, a VRB manufacturer trying to vertically integrate with its own vanadium mine in Nevada.

A VRB stores chemical energy in the form of vanadium-based electrolyte and generates electricity by inducing a reduction-oxidation (redox) reaction: that is, a transformation of matter by electron transfer across an ion exchange membrane, within a battery stack. The reaction is achieved by either applying an electrical load (discharge) or an electrical supply (charge) to the battery stack as the electrolyte is flowing or being pumped across the membrane.

“Lithium is dominating the storage market, but it is not always the best tool for the job,” said Jonathan Milley, director of business development at Vionx. “Lithium batteries are really for power applications, best-suited for short duration purposes, while vanadium flow batteries are for energy applications, and are therefore a more serious tool for keeping the lights on overnight.”

A lithium-ion battery undergoes a physiochemical change that degrades the electrodes during charging and discharging, but with a VRB, the charge differential is created by an ion exchange across a membrane, meaning the element does not wear out.

“So unlike the lithium-ion battery in your laptop, you never have to replace a Vionx battery,” Milley said. “Certain applications in the grid can cause huge challenges for a lithium-ion system. If you’re trying to drive a screw in, don’t use a hammer.” The Vionx system is also safe and cannot burn because the electrolyte is 70% water, he added.

“The vanadium doesn’t wear out; it doesn’t degrade; it doesn’t need to be replaced or augmented,” Milley said. “The vanadium goes in the electrolyte on Day 1, and if 30 years from now you want to take the whole system apart, the vanadium is fully recoverable. It retains its commodity value [it is a key component in steel production] because it’s not consumed.”

Because the electrolyte is flowing past the electrode, a flow battery allows for the physical separation of capacity and energy, or megawatt and megawatt-hours. Vionx takes an architectural design that capitalizes on that ability and separates the two intentionally, Milley said.

“This allows for scaling at increasingly greater economies of scale; since we are adding only electrolyte to get an additional hour of run time, the cost per kilowatt-hour is much less for a 10-hour system than for a four-hour system. Also, if we have a customer who’s looking at eventually using the system to clear in the PJM capacity market or to be used as a reliability product, but in the near term needs ramping support and load reduction, then a four-hour system can be installed initially, and in the future another six hours of electrolyte can be added to achieve a 10-hour duration system,” Milley said. “Only the electrolyte is added, not any battery stacks, pumps or control components.”

Milley acknowledged that vanadium can be expensive, but he said it is still cheaper for long-duration applications than a solid-state battery that requires the purchase of more cells to expand its capability.

“In our case, you’re simply buying one component or one aspect of the system,” he said.

Vionx is owned by Starwood Energy Group, Vantage Point Capital and other private equity firms, and by United Technologies, whose battery stack design is under exclusive license to Vionx.

3M supplies the membranes and Jabil is the system fabricator. Glencore is currently supplying the vanadium electrolyte, by sale or lease, depending on whether the buyer wants to book it as a capital expenditure or operating expense. Siemens cooperates on a project-by-project basis.