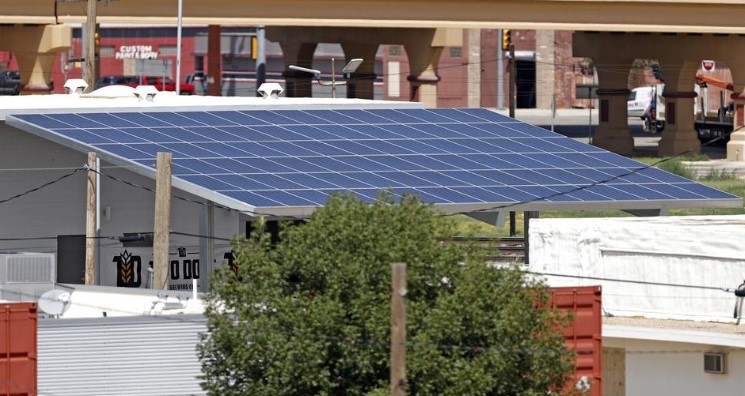 A bright idea will serve as a functional conversation piece at Two Docs Brewing Co., opening later this year at 502 Texas Ave.

A solar panel array that doubles as a patio awning will be one of many unique elements featured at the brewery in the heart of the arts district in downtown Lubbock.

“I think when you’re standing underneath this thing, and see that it’s more than just a covering, it’ll invoke some thought and inspire others to do this around town,” said Eric Cunningham, co-owner of Two Docs.

Solar panels work by absorbing sunlight with photovoltaic cells, generating energy that is then converted to be usable. The 90-panel array will provide an estimated third of the facility’s electricity.

“It’s not 100 percent, but a third is significant,” Villareal said.

The solar panel system was an easy sell to the Two Docs owners. Sure, it was an investment, Cunningham said. But Villareal estimates they will see a return on their investment within a few years.

The project cost around $90,000, Villareal said, but was a bit more expensive than most projects because of the desired look. The price of projects varies.

“We’ve been on a tight budget, but it really wasn’t that much more,” Cunningham said. “We felt like the interesting aspect of having it would offset, in the long term, the investment.”

A tax credit is available for installing solar panels, that can help balance out the initial cost. The federal solar investment tax credit deducts 30 percent of the cost of installing a solar energy system from federal taxes. The credit is in place through 2019, but will dip to 26 percent in 2020 and continue to decrease, according to the U.S. Department of Energy.

Harral predicts, from his personal experience of owning a house in an ERCOT market, that Lubbockites will see an increase in their electricity bills following the change. LP&L has said the switch from energy provider Southwest Power Pool to ERCOT will give customers the ability to choose from a diverse energy portfolio, which could lead to lower expenses.

“That business is making the right move, they absolutely are,” Harral said of Two Docs’ decision to invest in solar energy.

Solar energy is common in other parts of the state, Harral said. Texas ranked as the fifth largest solar-producing state earlier this year, according to the Solar Energy Industries Association. The state is projected to more than double the megawatts generated through solar energy over the next five years.

The majority of solar energy efforts have been clustered in other parts of the state. There are two solar panel plants in Dawson County that produce usable energy, and Harral’s company Group NIRE conducts some solar energy research. Otherwise, installer Villareal said renewable energy enterprises in West Texas have focused on wind energy.

“Solar just kind of got left in the dust,” Villareal said. “In reality, in this market with your climate, solar makes a lot of sense. You guys here, just like Albuquerque and Phoenix, have 300 plus days of sun. Even when it rains, it rains for 20-30 minutes, it goes away and it’s sunny again.”

To compare, Albuquerque and Phoenix both ranked in the top 10 “Shining Cities of 2017” list, released by Environment America, for their amounts of solar energy.

Villareal has ambitions for Lubbock to join those ranks, some day. He is relocating to the Hub City, and hopes the project at Two Docs will encourage other businesses to install solar panel arrays.

“I’m making a commitment to bring solar to this town,” Villareal said. “I just picked up an office on Broadway, I’ll be moving in soon.”

Lubbock is one of the last Texas cities to embrace the craft brewery trend, owner Cunningham said. Between the brewery and solar panel array, the Lubbock native said it is exciting to bring new concepts to the city that align with West Texans’ interests.

“I think most West Texans at heart are conservative and like to conserve what they can, coming from our farming roots,” Cunningham said. “There’s nothing more conservative than harvesting the power of the sun to help produce energy.”