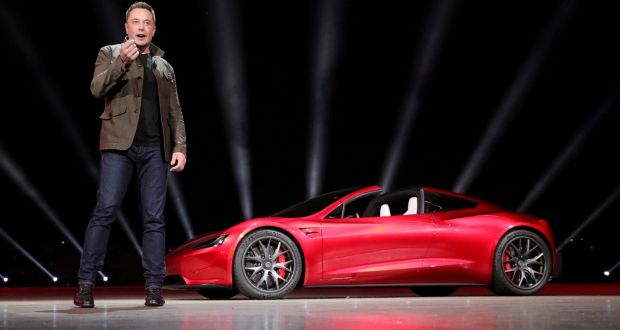 Tesla’s lead in battery technology gives it a cost advantage that may last for several years and help the US electric-car maker face down an onslaught of new competition, according to new research from Bloomberg New Energy Finance.

Power packs made by the US manufacturer and its Japanese partner, Panasonic, require less cobalt, the metal whose price has shot up with demand for electric cars. Chief executive Elon Musk on June 5th said Tesla is targeting a price of $100 per kilowatt-hour for battery cells this year – a level BNEF doesn’t expect the industry standard to drop below until 2025.

“If Tesla reaches its pack-price milestone, it will be several years ahead of our industry benchmark,” BNEF said in the report. The researchers noted that others made batteries for as low as $120 per kilowatt hour in 2017, “which suggests that Tesla is not alone in being ahead of the curve.”

Tesla hasn’t been able to extend its US dominance in electric cars to other regions, and is now under threat from new models coming from European brands like Volkswagen, Daimler, Volvo Cars and BMW. The competition will be toughest in the SUV and crossover segment, where the Model X goes up against new models from Jaguar Land Rover’s I-Pace, Audi’s coming E-Tron and the Hyundai Kona, due in 2019.

With expanded consumer choice, competition will focus not just on the availability of electric cars, “but by more prosaic issues such as price, build quality, aftermarket services and user experience,” the report said. “If Tesla is to maintain its early leadership in the EV industry, it may have some ground to catch up in these areas against the established automakers.”

By contrast, Tesla and China’s BYD are the only two vertically integrated electric-car makers, “which may confer a long-term advantage if battery technology becomes a major differentiator”, the report said.

Learn more
BYD is the leader in global electric-car sales, with 9.9 per cent of the market, according to BNEF. Tesla is just behind at 9.7 per cent.

In other areas, the results are mixed. Tesla is improving production of the Model 3 and its products will still stand out through 2020, BNEF said. The company will need significant investments in China and to develop its semi-truck, Model Y and pickup truck, the report said.

Meanwhile, delays to an upgrade of its Autopilot feature and a lack of mobility services leave it behind other carmakers, the report said. The Solar City business it acquired for $2.1 billion hasn’t lived up to expectations. – Bloomberg