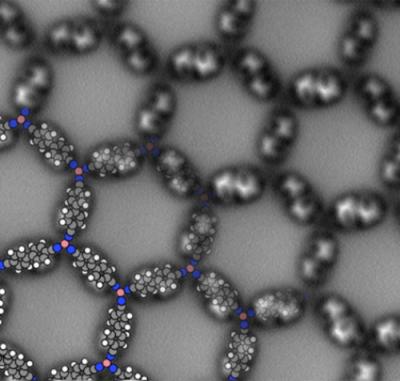 3D Metal-organic frameworks (MOFs) are an important class of materials that could be used in applications as diverse as sensing, gas storage, catalysis and optoelectronics. Their 2D versions might even be used as flexible material platforms to realize exotic quantum phases, such as topological and anomalous quantum Hall insulators.

Such 2D sheets are usually synthesized on metal substrates, and a major problem is that the strong interactions between the two materials mask the intrinsic electronic properties of the MOF itself. Now, researchers at Aalto University in Finland say they have overcome this problem by fabricating MOFs on graphene, which only weakly interacts with them. The resulting 2D honeycombed frameworks could be used to make MOF-based designer materials with complex, tuneable electronic structures.

The researchers started by depositing organic ligand “linkers”, such as dicyanobiphenyl (DCBP) or dicyanoanthracene (DCA) with cobalt (Co) metal atoms on their graphene substrate to produce individual metal-ligand complexes. They then annealed the sample at temperatures below 100°C to form the extended MOFs.

“We characterized the structures using low- temperature scanning tunnelling microscopy (STM) and atomic force microscopy (AFM),” says Liljeroth. “We are able to access the intrinsic electronic properties of the materials and show that the Co-DCA MOF behaves as a 2D system with delocalized states.” This result, which the team backed up with density-functional theory (DFT) calculations, proves that the 2D band structure in the MOF is decoupled from the substrate.

“2D MOFs have been theoretically predicted to be a flexible platform for realizing various quantum materials, and our work is a first experimental step in that direction,” Liljeroth tells Physics World. “The MOFs we have made are – if you like – just simple semiconductors, but we have shown that it is now feasible to proceed to something more exotic.”

The work also opens the way to making MOF-based custom-tailored electronic materials with complex, engineered electronic structures, he adds. And being able to directly grow 2D MOFs on graphene means that these heterostructures might be readily used in applications such as electronics, sensors and catalysts.

The researchers say that they will now be looking to expand the types of MOFs that they can synthesize on weakly interacting substrates. “The complexation reactions on these different substrates may work differently compared to those occurring on a metal substrate, and we have much less published literature to go on here,” says Liljeroth. “We will then attempt to incorporate heavy metals into the MOFs since these have high spin-orbit coupling, which should result in the formation of a 2D topological insulator, according to theoretical predictions.”