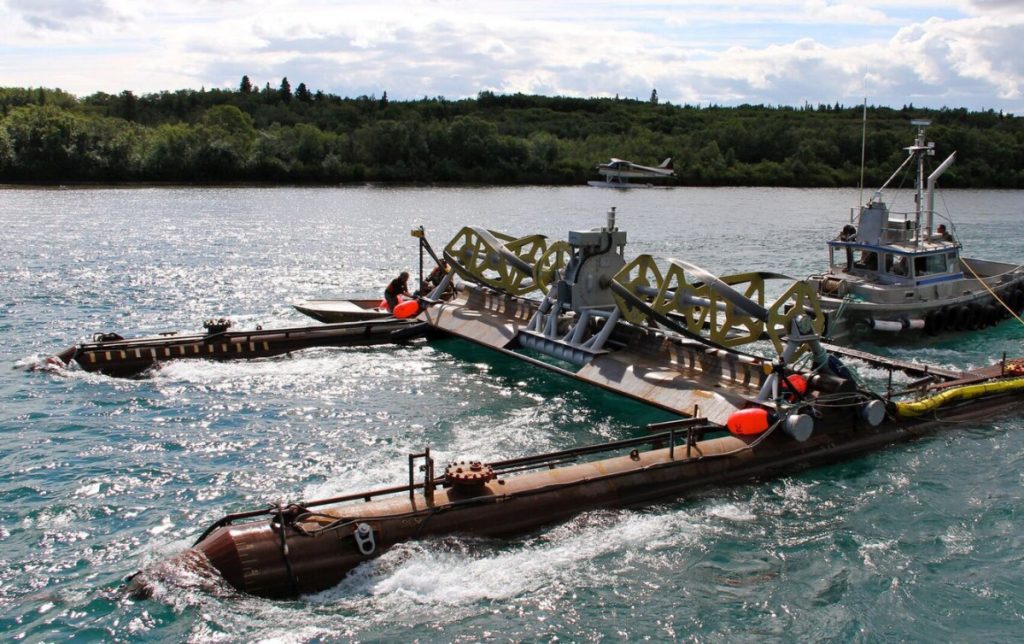 Buoyed by a recent $6 million infusion, Ocean Renewable Power Co. hopes to raise $12 million this year and $18 million later, but venture funds have been favoring wind and solar projects.

Portland-based alternative energy startup Ocean Renewable Power Co. is stepping into rough financial waters as it tries to secure investments worth tens of millions of dollars to advance its unique marine power projects.

The company wants to raise $12 million in private investment by the end of the year to set up improved versions of its RivGen and TideGen underwater turbines, said founder and CEO Christopher Sauer. Ocean Power, which recently got a $6 million infusion, has developed a sustainable technology that allows underwater turbines to generate electricity from flowing rivers and shifting tides.

An initial funding round will be followed by a push for another $18 million intended to start production for the commercial market and reach profitability in the next four years.

“We are getting closer and closer to commercialization. We have a clear path how to get there,” Sauer said.

But the company is fighting investment headwinds. Despite the promise of tidal energy, big investors are shying away from marine projects in favor of wind turbines and solar panels, cheaper proven technologies with relatively low risk and high yields.

“It is a tough world out there,” said Angus McCrone, chief editor of Bloomberg New Energy Finance. “Most of the big funds want to invest in wind and solar projects, not tech developments.”

“It doesn’t mean it is impossible to raise money, but it is more difficult than it was 10 years ago,” he said.

The marine energy sector attracted just $200 million in total new investment worldwide in 2017, a 14 percent drop from the year before. In contrast, investors sank $161 billion into solar and $107 billion into wind last year, according to the 2018 annual renewable energy investment report by the United Nations Environment Program and Bloomberg New Energy Finance.

“From an investor perspective, tidal has been very much a sideshow and is of lower importance,” said Edward Guinness, lead manager for the alternate energy fund at Guinness Atkinson Asset Management, a firm with offices in Los Angeles and London.

The fund manages about $400 million in energy investments, with about $30 million in alternate energy, Guinness said.

“The thing about tidal is that it is a very nice idea, it is very compelling,” he said. “But it has not been providing cost reductions that other technologies have and it is unlikely to do so.”

Marine power ventures tend to be expensive, risky and unproven – prone to escalating costs and damage from saltwater and heavy seas, Guinness said.

“We are not really looking to invest in early-stage tech companies,” he said. “We are looking for reasonably mature investment opportunities.”

Sauer is clear-eyed about the realities of lining up money to move ORPC ahead, but believes the company has the right plan.

It intends to install optimized versions of its turbines on the Kvichak River in Alaska and the St. Lawrence River near Quebec City in Canada – models intended to demonstrate the possibility of power generation in remote communities.

“We think once those systems are up and operating that it is a good break point to raise the rest of the money we need to be cash flow-positive by 2022,” Sauer said.

The 14-year-old company has received millions of dollars in federal and state funding and private investment on its path to making commercially viable hydrokenetic power systems. In 2012, ORPC was the first company in the U.S. to generate electricity to the power grid with a tidal turbine in Cobscook Bay, in easternmost Maine.

Since that experiment, the company has branched out. In 2014, it tested a river version of its turbine on the Kvichak River, and over a two-year trial proved it could provide about a third of the power for Igiugig, a remote village nearby.

In June, the Igiugig Village Council and ORPC were awarded $2.3 million from the Department of Energy for further tests of the river turbine. His company received a separate $650,000 award for research and development and has pulled in about $3 million from private investors this year, Sauer said.

A focus on remote communities in North America may give ORPC the base it needs to make the leap into commercial markets, Sauer said. Energy costs are typically very high in isolated villages and townships that depend on generators and fuel. Transportable underwater turbines are a cheaper and cleaner alternative and one that may provide local employment opportunities.

“The early adoption market for us are these remote communities because our systems today can save them money,” Sauer said.

If more communities buy into the product, it could help ORPC overcome the production cost barrier and provide a springboard into European and South American markets.

“Once these are operating and have benchmark performance, we are then in a sales mode,” he said.

The company also plans a new tidal project in Eastport with the prospect of generating 5 megawatts.

Raising money for marine power technology has always been tough, Sauer said. Most of the private investment his company has received has come from independent family funds focused on “impact” investing – putting money into companies that match investors’ ethical goals.

Recently, however, parties that have been on the sidelines, such as private equity firms and renewable energy funds, have shown more interest in marine power innovations, Sauer said.

“We are making progress” he said. “I am hopeful that in our next ‘raise’ here we will have all types of investors involved.”