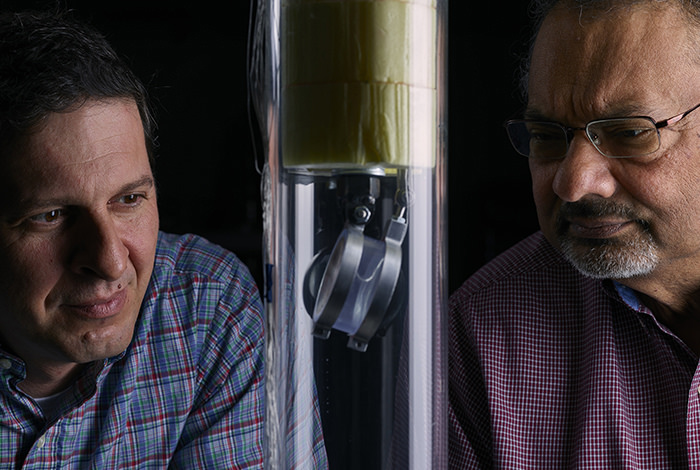 ACCOBeam is created by clamping the circumference of a piezoelectric disc and putting it inside a hard plastic enclosure. Then, exciting concentric ring-like ripples in the disc generates a highly collimated, powerful sound beam with minimal side lobes. It operates at a frequency of 10 to 250 kHz, low enough that the sound does not attenuate significantly in any medium. In fact, ACCObeam can image underground in almost any medium and has been shown to image two to three meters of rock without compromising image resolution. ACCObeam can also operate in opaque and highly attenuating media, such as drilling mud.

The team is exploring a range of additional applications using the technology. For example, the team has been testing ACCObeam on high explosives to overcome a current limitation: There is no way to remotely image the temperature field in a potential bomb. Using mock material, the team has proven that ACCObeam can noninvasively establish the 3D thermal field inside a closed container. ACCObeam, which is highly portable, could significantly change how emergency responders analyze explosive threats.

ACCObeam could also be easily calibrated for underwater operation. Its tight beam makes it an attractive candidate for long-range undersea communications, deep-sea imaging, and video transmission beneath oceans with reduced chance of interception.

In the field of biomedical imaging, the team envisions that ACCObeam could precisely send energy to specific regions of interest, letting it remotely charge batteries to power internal medical devices such as pacemakers. The combination of deep penetration and high resolution means ACCObeam might potentially image tumors and various organs in humans that are currently out of reach of ultrasound imagers.