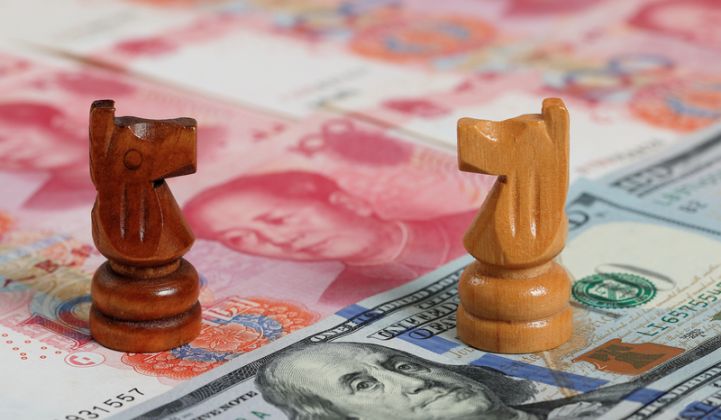 China is pushing back on President Donald Trump’s solar import tariff by filing a complaint at the World Trade Organization.

The complaint, first reported by Reuters, questions the legality of the Section 201 tariffs, which the Trump administration imposed in January in the name of protecting the few remaining U.S. solar cell and module manufacturers.

This is just the latest challenge to the tariff: China, the European Union, Singapore, Taiwan and South Korea requested consultations through the WTO in February, marking the first stage of formal disputes. Three Canadian manufacturers filed a lawsuit against the tariff at the United States Court of International Trade.

Even if the WTO agrees with China’s new complaint and finds the tariff to be in violation of trade rules, relief for Chinese solar companies is by no means guaranteed.

Trump may choose to flout the international body’s ruling. Even if the U.S. did comply, deeper historical trends stand in the way of a resurgence in Chinese solar imports to the U.S.

“As the U.S. violations have severely distorted the global market for products like photovoltaics and seriously damaged China’s trade interests, China’s use of the WTO dispute settlement mechanism is a necessary measure to safeguard its legitimate rights and interests and maintain multilateral trade rules,” the Chinese Ministry of Commerce said in a statement quoted by Reuters.

The Trump administration crafted the tariff — which starts at 30 percent of the price of imported cells and modules and declines over four years — using the obscure Section 201 of the 1974 Trade Act. The measure sought to shore up an industry that had already largely moved offshore, leaving just Suniva and SolarWorld as the financially troubled survivors of U.S. crystalline-silicon cell manufacturing.

“On the merits, China appears to have a very strong basis on which to contest the Section 201 tariffs and ultimately, I think, is likely to prevail in the WTO,” said Allan Marks, a project finance lawyer at Milbank.

Timing presents a challenge, though. These sorts of trade complaints take a long time to sort out, and the Section 201 tariffs only last four years.

Even if the tariffs get removed, they didn’t crush Chinese solar trade prospects so much as pile onto existing barriers.

China-headquartered companies shifted their production outside of the country back around 2015, in response to U.S. Anti-Dumping and Countervailing Duties on solar imports from China, said analyst Jade Jones, who tracks upstream solar manufacturing at Wood Mackenzie Power and Renewables.

“Major Chinese manufacturers that import solar modules to the U.S. have built supply in Southeast Asia or have fostered relationships with OEM suppliers in the region,” Jones said.

In fact, Chinese manufacturers have more to worry about closer to home: Their own government decided to cut back support for domestic solar deployments.

Beijing enacted a suite of policies in June to diminish its ballooning subsidy payments for solar installations. Analysts calculated that the policy would chop China’s solar deployments by around 20 gigawatts this year.

That development has far more impact on local cell and module producers than the Section 201 tariffs, Jones noted.

“There is a whole slew of domestic suppliers that completely rely on demand in the region, which has been cut back significantly from previous expectations,” she said. “Not only did demand decrease for domestic producers, but those who did have a presence in export markets saw prices suddenly collapse.”

As the largest market for solar modules in the world, China’s cut in demand rippled out through the global market and instigated a supply glut.

“China’s policy changes are more than just a change in demand expectation for 2018 — it’s affected our demand forecast for years out,” Jones said. “Suppliers will need to continue focusing on new opportunities in export markets.”

As China opens a new, very small, front in the larger trade war, the biggest beneficiaries may actually be in the United States.

U.S. installers and developers, as well as manufacturers who use overseas factories, spent 2017 doggedly fighting the proposed tariffs. Now in effect, the tariffs constrain module supply and contribute to higher prices in the U.S. market relative to other countries.

If the WTO sides with China in its complaint against the U.S., American customers could see better prices and more solar industry jobs.