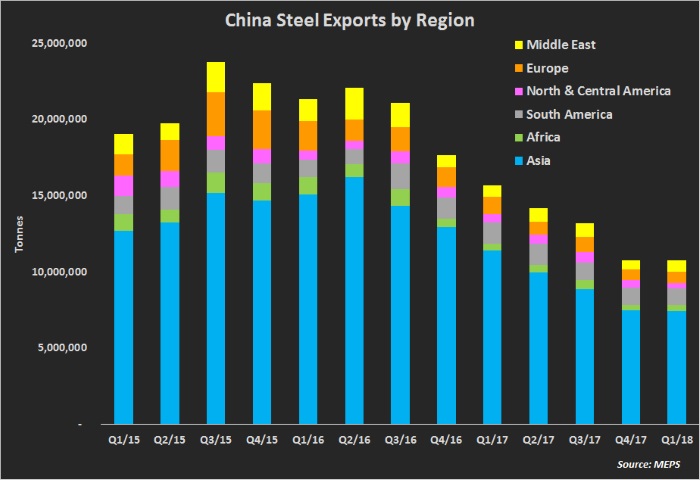 Washington’s tariffs on steel imports have prompted warnings of an earnings hit for European producers, but for companies such as ArcelorMittal with operations in increasingly protected markets, levies are expected to yield a profit bonanza.

The United States slapped 25 percent tariffs on steel imports earlier this year, prompting such shipments to fall 7.5 percent to 18 million tonnes in the first half, with further declines expected.

The tariff move coupled with strong demand has sent U.S. hot rolled coil steel futures HRCc1 to decade highs around $900 a tonne, up 35 percent on the year.

This has been a boon for European steelmakers that can still sell into the United States despite the tariffs, and which since July have been protected by EU steel tariffs imposed in response to the U.S. levies.

Despite this, investors are reticent to bid up the stocks due to concerns the global trade rift triggered by Washington’s steel tariffs will be protracted, eventually damaging growth and demand.

“Trade wars are a risk, but right now steel stocks are only pricing in negatives,” a Swiss-based fund manager said.

“People assume tariffs are bad for all companies, but in the case of steelmakers, tariffs are rather good,” said Fabrice Theveneau, head of global equities at Lyxor Asset Management, which owns ArcelorMittal (MT.AS) shares.

Also a plus is that steelmakers outside China are mostly using profits to repay debt instead of investing in new capacity, just as Chinese capacity is shrinking, analysts and investors say.

China produces half of the world’s steel. It has cut 150 million tonnes of steel capacity since 2016, while its steel exports plunged 31 percent last year.

“Steelmakers have never had it so good,” said Alistair Ramsay, head of research at Metal Bulletin Research. “We see a high pricing environment for steel majors for some time, they just can’t be ridiculous (with price rises).”

Ramsay sees U.S. hot rolled coil prices down $100 a tonne by the year-end as local steelmakers boost production and high prices crimp demand, but believes steelmakers’ profits will be protected.

This is because they can afford to cut prices – a move that will allow them to sell more in a fast-growing economy.

In the EU, by contrast, prices are expected to rise by the year-end as tariffs cut steel imports by 5 million tonnes or 3 percent, according to investment bank Jefferies.

The average yield on U.S. and EU steelmakers’ free cash flow is 11 percent versus a historical average of 6.6 percent, indicating more available cash for dividends, investment or debt reduction.

Despite the above, the S&P index of U.S. steel equities is up just 2 percent this year with shares in U.S. Steel (X.N), the country’s largest steelmaker, down 10 percent.

U.S. Steel has more exposure to higher spot prices versus competitors, which are tied into discounted long-term contracts, said the Swiss-based fund manager, who holds shares in the company.

But investors are nervous that demand will fall if the global trade rift is protracted, especially as a number of U.S. and EU industrial firms have announced profit downgrades linked to tariffs.

The risk that this scenario will transpire is receding, however.

In a major concession, Washington agreed in late July to refrain from imposing car tariffs on the EU while the two sides launch talks to cut trade barriers.