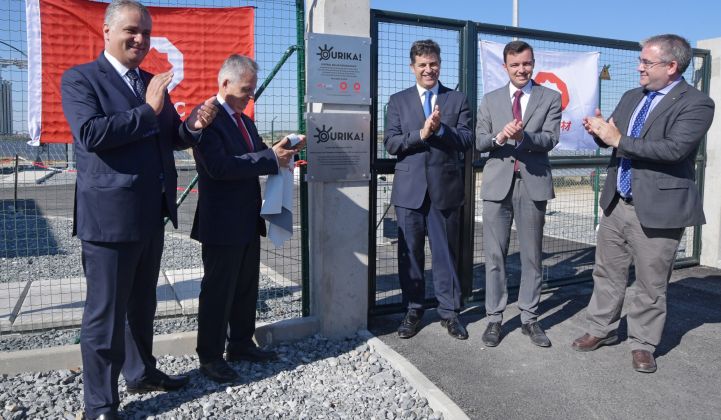 Continuing regulatory issues in Spain mean solar development is getting pushed across the border.

This month, for example, the Irish developer WElink Energy, which has offices in Madrid and Barcelona, inaugurated Europe’s largest subsidy-free solar plant on the back of a power-purchase agreement with Holaluz, a Spanish energy retailer. But the plant is in Portugal.

“Next year they are planning on installing 200 megawatts in the south of Portugal,” said Pérez, a current director of the Spanish PV Union and former defense lawyer for the solar industry.

Long-term, he said, WElink hopes to build a gigawatt of capacity on the Iberian Peninsula. Three quarters of that is earmarked for Spain, but WElink is holding off its Spanish market development plans until there is a change in the regulatory environment.

At the moment, the fact that Spain applies a 7 percent tax to renewable energy production means Portuguese plants have an immediate financial advantage over their Spanish counterparts.

The tax is a hangover from when Spain racked up huge imbalance between electricity system income and renewable energy subsidies, known as the tariff deficit.

Spain’s last government introduced the tax on the value of electrical energy production in 2012, as one of its first moves to cope with the deficit. It later axed subsidies altogether, returning the electricity system to a surplus in 2014, but the tax has remained.

What’s more, the tax gets applied even to new plants that had nothing to do with the tariff deficit, said Pérez. In Spain today, “plants don’t get a subsidy but they all get taxed,” he said.

Taxation is only part of the problem for Spanish solar developers. They also have to overcome a barrage of national, regional and local regulation obstacles. The red tape is frustrating for clean-energy retailers such as Holaluz.

The Barcelona-based company is trying to help Spanish customers join the energy transition by offering residential solar kits and Tesla Powerwall batteries, but has to pay for an entire legal team just to sort out the paperwork.

Some of the regulatory hoops border the ridiculous, said Pérez. In one case, a customer’s local council requested a written waste disposal plan for the boxes that came with a 2-kilowatt residential solar kit.

Not all local authorities go to such extremes, said Pérez. But the administrative hurdles posed by national regulation are bad enough. If they were streamlined or eliminated, he said, solar installation times could be cut from three months to one, and the cost could be halved.

The contrast with neighboring Portugal is evident even in the grid connection process. If two or more developers are vying for the same grid connection in Portugal, the authorities put it to a draw. In Spain, it’s usually down to who has the best contacts, deepest pockets, or both.

All this hasn’t stopped Spanish developers from applying for grid connection permits. In fact, on paper Spain is experiencing a solar boom, with around 20 gigawatts of production looking for permission to join the grid.

However, the costly market setup, combined with regulatory barriers to self-consumption that can add up to five years to the break-even point for solar, means little is happening on the ground.

Perez said only around 1,200 plants were listed on the government’s solar self-consumption registry, although more may have been built with no regard for the regulatory requirement to register the systems. The situation could change soon, though.

A surprise change in administration in June has raised hopes that the stifling red tape brought in by Spain’s former leadership could be swept away in the near future.

The new Spanish Socialist Workers’ Party (Partido Socialista Obrero Español or PSOE) government is in a minority, with the slimmest representation of any ruling party in the history of Spain.

But the PSOE has pledged to improve support for renewables, and there is wide cross-party consensus that the rules governing solar need to change.

Plus there is a window of opportunity to act now because a review of the electricity system was underway when the PSOE came to power. The PSOE could easily hijack the review to make it easier to build solar in Spain, said Pérez.

And if not, at least the Portuguese won’t complain.