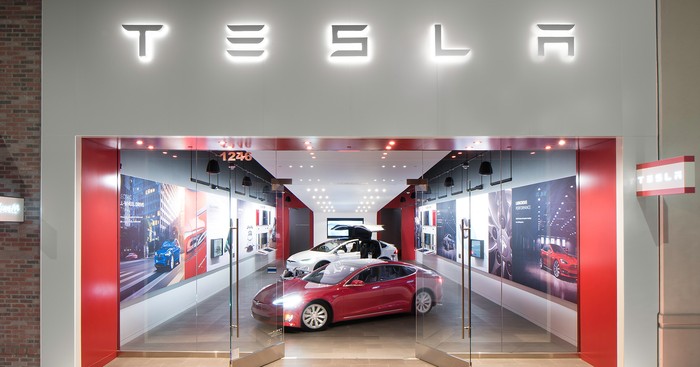 It’s looking more and more as if Tesla (NASDAQ:TSLA) CEO Elon Musk’s statement that he had “funding secured” to take the company private was a bluff.

On Friday afternoon, Bloomberg reported that Tesla is holding “early discussions” with banks about the feasibility of a deal to take the company private, and that Musk and his advisors are “seeking a wide pool of investors.” (Emphasis added.)

“Seeking.” That’s very different from “secured,” which is what Musk said in his Tuesday tweet that sent Tesla shares soaring.

It’s becoming clear that this go-private plan is far from a done deal. What’s really going on here?

Funding may not have been “secured,” exactly

I don’t know for sure what’s going on here. It’s possible that nobody but Musk himself really knows why he sent the fateful tweet on Tuesday afternoon.

Journalists have been trying to uncover Musk’s claimed funding source since that tweet was posted. What they’ve learned is that most of the entities that could conceivably fund such a deal say that they aren’t the source of the “secured” funding that Musk claimed to have in place.

Neither Tesla nor Musk himself have offered any clues as to who or what might be willing to fund the deal. In fact, it sounds as if Tesla’s board of directors didn’t know any more than we did. Reuters reported late on Thursday that the board had “not yet received specific information on who will provide the funding.”

(The sources for that Reuters article aren’t identified, but I suspect they included at least one of Tesla’s independent directors, or someone speaking for the directors. It reads as if the board wants the world to know that they were taken by surprise, too. Read it and see what you think.)

Until we hear something to the contrary, my takeaway is that Musk didn’t have “funding secured.” If he didn’t, then it may have been a bluff, possibly intended to boost Tesla’s stock price — and Tesla’s board may now be scrambling for cover.

Tesla’s directors should be worried

If there isn’t funding in place for a deal to take Tesla private, then Tesla’s board of directors has good reason to be worried. Attorneys in the San Francisco office of the Securities and Exchange Commission were already gathering general information about Tesla’s stated manufacturing goals and sales targets before Musk’s tweet, according to Bloomberg. They’re now reportedly investigating whether Musk’s tweet was supported by facts (meaning, whether he really had secured funding when he tweeted).

If not, the SEC could sue Musk for making an untrue statement of a material fact to manipulate Tesla’s stock price, a violation of SEC Rule 10b-5. (That’s serious.)

A shareholder is already suing Musk and Tesla on similar grounds, in a potential class action suit filed in federal court in San Francisco on Friday. But a case brought by the SEC itself could lead to serious consequences — not to mention the possibility that the SEC’s investigation could uncover other items of concern.

Incidentally, Tesla also has yet to file a Form 8-K, required after a significant event. A company generally has four business days to file an 8-K, which as a practical matter means Tesla has until the end of the business day on Monday, counting from the time of Musk’s initial tweet.

But the fact that Tesla hasn’t yet filed an 8-K suggests strongly that it hasn’t yet figured out what it’s going to say, officially.

Where does Tesla go from here?

I still think there are two possibilities for Tesla here. Either Musk and Tesla’s board come up with a real plan to take the company private, soon — or it will become clear that Musk’s tweet was false, and there will be consequences.

I expect they’ll try like heck to do the former. But finding people willing to fund the deal may not be easy. Sure, Tesla has great appeal to some investors. But this deal — at least as spelled out by Musk — is essentially asking someone to pay $420 per share for illiquid shares of a private company. (Or, alternatively, to lend a whole lot of money to a company that has never managed to post a full-year operating profit.)

Given that anyone can buy liquid shares of public Tesla right now for around $355, it may be quite a stretch.