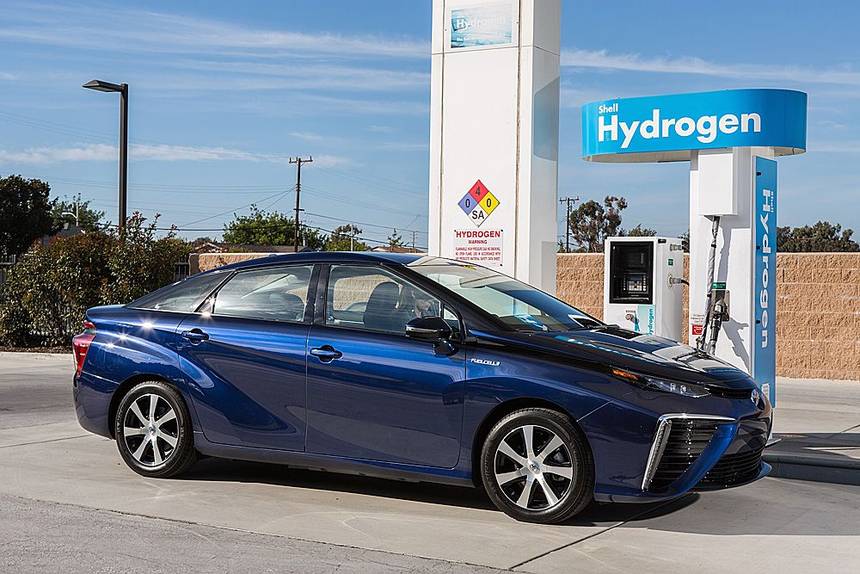 Hydrogen, oh hydrogen. In the race to zero-emission vehicles, there is no clear winner. Battery electric vehicles require heavy batteries to carry them over long distances while the less-developed suite of technologies supporting hydrogen vehicles results in efficiencies that drive the price of hydrogen up, especially at current low volumes. But there’s more to it than that.

YouTube channel Real Engineering took on the challenge of comparing current hydrogen fuel cell technologies with their battery electric vehicle counterparts and came out with a 15 minute video that beautifully walks through the process. It’s a great one-stop shop if you want to get up to speed on hydrogen and how it compares to battery electric vehicles in terms of emissions, efficiencies, and technologies.

Hydrogen cars have been a polarizing topic for years. At its core, a hydrogen car is an electric vehicle with a small onboard battery that is continuously charged from a hydrogen fuel cell that pulls stored hydrogen gas, mixes it with oxygen from the atmosphere, and runs it through a proton exchange membrane, releasing electricity along the way. The only byproduct of this process is water, making the vehicle essentially just an electric vehicle that gets its power from a different type of onboard battery drivetrain. I’ve driven both popular models for CleanTechnica — the Toyota Mirai and the Honda Clarity Fuel Cell — and found that they both drove and operated like “normal” vehicles, which is great.

Behind the scenes, it’s more complicated than that and it all starts at the pump. Let’s dive into the video. It kicks off by taking a look at how global automotive markets are responding to hydrogen fuel cell vehicles. In the US, companies and consumers are slowly moving towards hydrogen. This is happening in parallel with a slow buildout of the hydrogen fueling station network that’s required to fuel them every 300 miles or so.

A Network Of Fueling Stations

The relatively slow buildout of the fueling network allows early adopters living near a hydrogen fueling station to buy the car and use it around town or on any of the growing network of stations. The network is expected to grow over time and, as it does, the capacity of each station and the cost per kilogram of the hydrogen served up should continue to fall over time as the technology matures and scales up.

Japan, on the other hand, is diving head first into hydrogen fuel cell vehicles, with its home team automakers Honda and Toyota backing the charge. It is aiming to have 160 fueling stations for its island residents by March of 2021 to support a fleet of 40,000 hydrogen fuel cell vehicles (FCV), dwarfing the 50 stations California is aiming to have by 2020. It expects the number of stations to balloon to 900 by 2030 to support a fleet of 800,000 FCVs.

When it comes to onboard storage of energy, hydrogen has the advantage, as hydrogen is stored in high-pressure tanks underneath the vehicle. These lightweight tanks are used to store the high-pressure hydrogen, which stores a much larger capacity of energy in the form of hydrogen compared to lithium-ion batteries. Energy stored in batteries requires many more battery cells for each extra mile added to the range of the vehicle. That means more weight and weight that the vehicle has to overcome for all those miles. In terms of the weight of the energy storage in the vehicle, hydrogen clearly has the advantage, even when the fuel cell and its infrastructure are taken into account.

The energy is transferred into hydrogen fuel cell vehicles physically, by pumping pressurized gaseous hydrogen into the vehicle. Battery electric vehicles (BEVs), on the other hand, are charged up by running electricity into them (electricity which is stored in chemical batteries). Today, that takes time and is one of the primary drawbacks of BEVs. But that’s where things get complicated. Let’s dive into the dirty details behind how these two clean energy technologies fuel up.

Unlike electricity for battery electric cars, the infrastructure to produce, compress, transport, and sell hydrogen does not really exist today, and as a new technology, each of these stages cost more than not just the existing electricity infrastructure, but also more than gasoline and diesel. Electric vehicles went through their own growth curve, and over the last 10 years, we have seen the cost of the equipment required to charge them continue to come down as volumes go up.

The Tesla wall charger, for example, was $1,200 when I purchased our Model S at the end of 2015, but it goes for $500 today. DC fast charging infrastructure is still in the early stages of this expensive ramp, and with each drop in price, a newer, faster charger seems to come out, keeping prices high while advancing the technology. Hydrogen fueling stations are following a similar model, where the price of stations remains extremely high — $1 million to $5 million per station — but the capacity of the station continues to increase over time.

Now that we have a station, we need to get some hydrogen to push through it. The video shares how hydrogen today comes from two primary sources, with steam reforming producing the vast majority of the hydrogen used today. Steam reforming requires a significant amount of heat to generate the steam that allows for the extraction of the hydrogen from the natural gas.

Electrolysis, which uses electricity to split apart the hydrogen and oxygen in water, can also be done at scale and with renewable electricity as the input. It has the potential to provide a solution for the zero-emission production of hydrogen. The problem is that it requires even more energy input than steam reforming, with a 30% loss of energy through the process.

With the intermittency of renewables, the ability to store excess generation at utility scale with this technology could be a potential winner, especially given the relatively low cost to store hydrogen at much larger volumes compared to lithium-ion batteries. However, the market is not moving towards hydrogen at all — rather, we are seeing larger and larger lithium-ion battery installations, like Tesla’s flagship installation of a whopping 129 MWh of storage in South Australia and even bigger plans for California’s PG&E and SDG&E.

Proton-exchange membrane electrolysis allows for the extraction of hydrogen from water by using a proton-exchange membrane that only allows protons to flow through it. The filter splits up the hydrogen and oxygen. When it’s all said and done, stable H2 — or hydrogen gas — is produced. The process is currently around 80% efficient, making it significantly more efficient than straight-up electrolysis.

Scientists working on PEM electrolysis believe they can achieve an efficiency of 82% to 86% around 2030 with this process, which would help drive production costs down further. PEM is unique in that it can produce hydrogen onsite at fueling stations, further eliminating emissions and expenses related to offsite production, transportation, and bulk storage.

Hydrogen is extremely inefficient to store because it’s simply very spread out and it’s physical properties make it harder to compress than any other gas with the exception of helium. That makes compressing hydrogen into a liquid for transport and storage almost a showstopper — just based on the inefficiency of compressing it into a liquid. Cryogenically compressing hydrogen into a liquid by supercooling it down to -250°C makes this possible, but the sheer amount of energy required to supercool and process the hydrogen results in a 40% efficiency loss using today’s technologies.

Compressing hydrogen through normal methods is more efficient, but still incurs a total system efficiency loss that stacks on top of all of the other system losses. Compression of hydrogen to 790 ATM is the most realistic optimization of efficiency vs cost of transport, but even compression to this level still consumes 13% of the energy contained in the hydrogen.

Alternately, hydrogen can be produced locally, at or near the fueling stations, as we mentioned above when talking about PEM electrolysis, but you lose economies of scale. This results in further inefficiencies that weigh the total system down and drive the cost up.

From Storage To Movement

Now that the energy is in the car, the next step is to look at using it to convert energy into motion.

Remember — hydrogen fuel cell vehicles are just electric cars that store their energy as hydrogen instead of in a battery. To use the energy, it must first convert the hydrogen back into electricity. That’s where the onboard fuel cell comes in.

With pure hydrogen as the input, fuel cells are 60% efficient at converting the stored energy in hydrogen into electricity. Battery electric vehicles, on the other hand, have losses related to charging, which is 90% efficient, converting the stored DC power to AC for the motors through an inverter, which is 90% efficient, and battery leakage — a phenomenon whereby batteries lose their charge over time. These inefficiencies stack up for a total efficiency from the wall to the wheels of around 75%.

The video from Real Engineering is simply chock full of data and warrants a watch or two for anyone looking to get a better understanding of how hydrogen fuel cell vehicles work and how they stack up from an efficiency standpoint compared to battery electric vehicles.

It is important to note that, while the data shared in the video makes it clear that today, hydrogen fuel cell vehicles have far more efficiency losses than battery electric vehicles and cost more to fill up than current gasoline vehicles, they are also several years behind battery electric vehicles in terms of innovation. Given sufficient time and focus on optimizing the total system efficiency, these zero-emission vehicles could be what our kids or grandkids drive around in … or, rather, get driven around in by the inevitably autonomous pilots in our future. That said, battery electric vehicle technology also continues to evolve, get more efficient, get cheaper, and get more convenient.

Speaking of total system losses, you didn’t think I’d finish up without putting a nice little bow on the overall picture, did you? Looking at the best-case FCV efficiency today compared to the current state of BEV technology being used by Tesla’s vehicles, the efficiency of FCVs is less than half that of a BEV.

This is assuming the best technologies are used in the generation of electricity, electrolysis, compression, fuel cell, and onboard electric propulsion system in the vehicle. There are plenty of ways to do this cheaper and to do it in a way that harms the planet more, using hydrogen sourced from steam reforming, but there are also opportunities to further improve these systems to obtain a higher efficiency and lower cost.

Similarly, battery electric vehicles are ever-evolving beasts and can be optimized with onsite rooftop solar generation, better motors, better inverters, and better chargers. Batteries are perhaps the largest component of the equation — not because they have high losses but because they are the largest single block of expense in electric vehicles. As we saw with Panasonic’s announcement last month about reducing the amount of cobalt used in batteries for Tesla vehicles, opportunities abound.