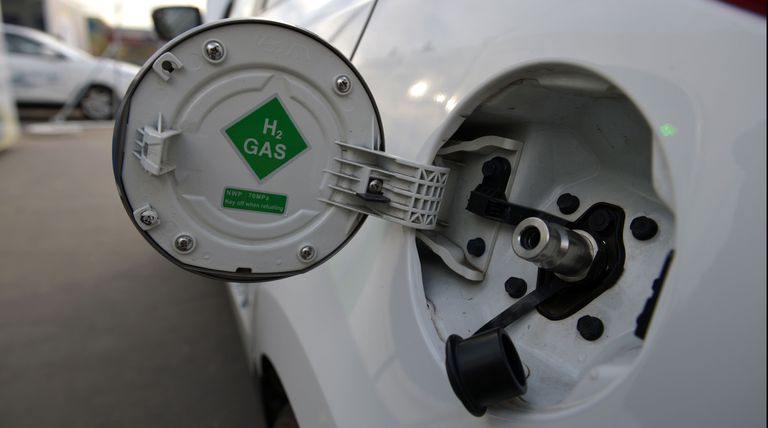 Right now, you could get behind the wheel of a car that burns zero fossil fuels and produces zero pollution or greenhouse gases, runs on the same chemical reaction that powers rockets, and gets twice as much mileage as a Tesla. It’s called a hydrogen fuel-cell vehicle, but unless you live in California, you may have never seen one on the road.

These days, electric cars driven by batteries seem destined to rule our roads, why hydrogen cars—once toasted as the vehicle of the future—are rare and relatively unheralded. Fuel cells actually have lots of advantages over the competition, including better mpg or faster refueling times. So what happened to hydrogen cars?

The first thing you should know is, hydrogen cars are electric cars. We tend to think of EVs only in terms of battery-powered vehicles like Teslas and the Nissan Leaf, but despite the fact that they run on a liquid fuel, hydrogen fuel cells actually power their vehicles with electricity. “When we talk about electric cars, that includes plug-in hybrids, hybrids, battery electrics, fuel cells, and anything else that may come along later that still uses an electric motor,” says Keith Wipke, laboratory program manager for fuel cell and hydrogen technologies at the National Renewable Energy Laboratory.

But a fuel cell is much different than a battery. The hulking lithium-ion battery in the belly of a Tesla Model S stores electrical energy as a voltage across an anode and cathode. A fuel cell, meanwhile produces electricity by means of electrochemical reactions between a fuel, typically hydrogen, and the oxygen in the air. During the reaction, hydrogen and oxygen combine to produce electrical energy and harmless water vapor as a byproduct. If that initial chemical reaction is large enough, it can move an entire vehicle.

This dance of mechanics and chemistry is similar to the hydrogen-oxygen reaction that powers rocket engines (you may remember it from The Martian). In this case the energy produced by the reaction is run through an electrolyzer and produces electricity instead of an explosion. In both cases, an extreme amount of energy is released with no toxic byproducts, which is what makes hydrogen fuel cells such a great power source for electric vehicles.

The hydrogen itself can be produced by running this process in reverse, which is called electrolysis. Running an electrical current through water separates the H2O into hydrogen and oxygen. More commonly, however, hydrogen is produced at scale from natural gas in a process called steam-methane reforming, in which high-temperature and high-pressure steam is combined with natural gas to create hydrogen.

THIS DANCE OF MECHANICS AND CHEMISTRY IS SIMILAR TO THE HYDROGEN-OXYGEN REACTION THAT POWERS ROCKET ENGINES.

This process does produce some carbon dioxide, so the hydrogen fuel itself isn’t 100 percent clean. But it compares favorably with CO2 emissions related to battery electrics and hybrids, and it’s obviously better than any fossil fuel vehicle in terms of environmental impact.

Currently, the state of California mandates that at least 33 percent of the hydrogen that goes into vehicles has to come from renewable sources, with the hope of eventually marching toward 100 percent renewable energy. That brings fuel-cell vehicles in line with battery electrics running off grid power, as California’s grid is mandated to be 33 percent renewable by 2020.

Many Positives, One Costly Negative

As battery electric cars come to the fore, the automotive industry is grapping with their two major downsides for drivers. One, it can take hours to fully charge a battery vehicle (if you don’t have access to a fast charger), and two, even with a full battery most electric cars struggle to travel half the distance of a conventional car on a full tank of gas.

Fuel-cell vehicles have neither problem. Hydrogen can be pumped into a vehicle’s fuel tank just like gas. You can fill up quickly, the same way you would with gas or diesel. And once it has a full tank, a fuel-cell vehicle can travel just as far as a gas vehicle. The Toyota Mirai has the shortest range of any commercial fuel-cell vehicle currently on the market and it gets 317 miles per gallon. That’s almost 50 percent more range than the 220 miles the base model Tesla Model 3 can travel on a single charge.

“If you look at how much energy is actually flowing through your hand as you’re holding a dispenser at a gasoline pump, it’s on the order of 1 to 2 megawatts,” Wipke says. Compare that to the 2 kilowatts—a thousand times less power—that’s available at a standard wall outlet. It’s easy to see why charging times are so long for battery electrics.

“With hydrogen, you’re still moving molecules. As long as you have enough pressure and low-resistance flow paths, then you can push the molecules from the station to the car very quickly.”

Once those molecules get into the car, there’s little difference between a fuel-cell vehicle and a battery-powered car. Battery vehicles are famous for their incredibly high performance—Tesla recently set a 0-60 record with one. But according to Stephen Ellis, fuel cell vehicle manager at American Honda, fuel cell cars can hold their own.

“Put enough motor in a [Honda] Clarity and it could hit those 0-60 times also,” he says. “Again, the Clarity fuel-cell is an all-electric car. You can choose whatever kind of electric drive motor you want and apply it. There is no barrier there.”

However, all those benefits currently come at a high price. Honda’s Clarity fuel cell vehicle currently leases at almost twice the cost of their battery model. Fortunately, that does include the cost of fuel, which currently sits around $14 per kilogram of hydrogen. In terms of energy, that’s the equivalent of around $5.60 for a gallon of gasoline. The cost of both the vehicle and the fuel should go down over time, but for now, the advantages of fuel cells will come with a hefty price tag.

Fill ‘er Up… Where, Exactly?

Now we come to the big stumbling block for fuel-cell vehicles: Today, it’s nearly impossible to get fuel outside California. The California Fuel Cell Partnership lists 35 currently operating hydrogen fueling stations, almost all within Los Angeles or the Bay Area. If the owner of a fuel-cell vehicle wants to travel elsewhere in the country, they’re out of luck.

“Consumers love the vehicles,” says Wipke. “The challenge has really been building fueling stations fast enough to keep up with the demand.”

While the fuel-cell industry isn’t meeting that demand, it’s not for a lack of trying. The industry is opening approximately one new fueling station a month, and is on track to meet its goal of 200 stations in California by 2025. Even so, hydrogen would remain far behind the approximately 8,500 gas stations currently in the state, as well as the 17,000 electric charging stations for battery vehicles.

Elsewhere, hydrogen infrastructure barely exists in the rest of the U.S., and fuel-cell cars are not sold in most states. There are a couple of fueling stations in New York and Connecticut, but Wipke says the Northeast is four to five years behind California. With its density and political climate, the Northeast may indeed be the place for hydrogen’s next boom. But building a robust network would be harder than it was in California.

“The challenge there has been that it’s not just one state, so you’ve got to get a bunch more people involved and comfortable with the technology,” says Wipke. “It’s a slower process.”

He estimates it’d take until the early 2020s for fuel-cell vehicles to become a viable mode of transportation in New York. Even though that’s years behind hybrid and electric infrastructure, Wipke thinks hydrogen cars can close the gap.

“One of the reasons why auto [manufacturers] are so excited about hydrogen is that it does provide them with a zero-emission vehicle platform that can actually replace every single vehicle in their fleet,” he says. “If you’ve got a very large truck or SUV that has towing capability and long range, to replace those vehicles is quite challenging with an electric drive if you don’t use hydrogen.”

Some of these vehicles already exist, or are in development. General Motors is researching a fuel-cell pickup truck, and Toyota has spent the last three years designing and testing a hydrogen-powered tractor-trailer. Residents of Orange County have been able to ride a fuel-cell bus to their destination since 2016, and there are 25 such buses operating around the country.

While most Americans have never seen a fuel-cell vehicle, a hydrogen fueling station will be built near you someday. Once they become common in the Northeast, fueling stations will start expanding inward from the coasts, and Wipke and Ellis both estimate that in a few decades fueling stations—and with them, hydrogen cars—will be pretty much everywhere.