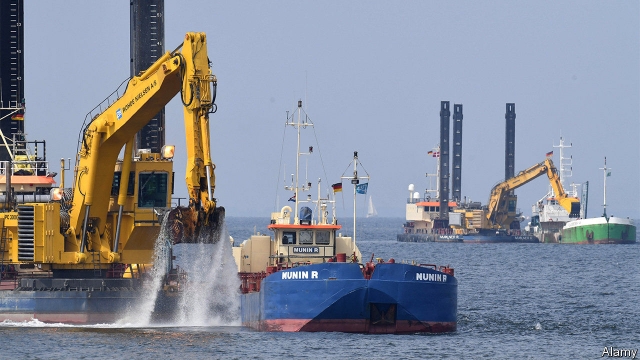 PIPELINES are meant to be safe, reliable and deadly boring. Yet the proposed €9.5bn ($11bn) Nord Stream 2 (NS2) pipeline, which from next year will double the natural-gas carrying capacity from Russia to Germany, is as controversial as energy projects come. In recent weeks the 1,200km undersea pipeline has generated tension between President Donald Trump, Angela Merkel, the German chancellor, and President Vladimir Putin of Russia. For years it has caused rifts between Europe and America, and within Europe. Germany vigorously supports it. Denmark intends to stop it passing through its territorial waters. Poland says it is anti-competitive. Ukraine sees it as a potential Russian noose around its neck. Yet, for all that, dredging has started and workers will begin laying the pipes across the Baltic sea shortly. Why is it such a geopolitical problem? And will it go ahead regardless?

Ukraine is the biggest potential flashpoint. The reason is that NS2 gives Russia a bigger cudgel to bully its neighbour over natural gas. Much of Europe’s gas from Russia to Europe passes via Ukraine, earning Naftogaz, a Ukrainian gas company, $2.8bn last year. This is an important part of the state budget. But after the annexation of Crimea in 2014, Gazprom, the Kremlin-backed energy giant, has played havoc with Ukraine’s gas supplies. Ukraine frets that once NS2 is completed, Russia will divert the rest of its European gas supplies directly to Germany, cutting off its transit income and crippling its economy. In support of Ukraine, and to punish the Kremlin for the annexation of Crimea, America’s Congress has threatened sanctions on those involved with NS2. The European Union is engaged in talks with Russia and Ukraine to ensure fair play. But once pipeline construction is under way, the harder it will be to stop—and the less incentive Mr Putin will have to make concessions to Ukraine.

The former Obama administration, in its efforts to isolate Mr Putin, complained rightly that NS2 would make Europe even more dependent on Russian gas, and would isolate Ukraine. Russia, in turn, argued that America’s concern for Ukraine was a red herring; in its eyes, America wanted to stop the deal so it could sell more liquefied natural gas (LNG) to Europe. Mr Trump has shifted the ground in Russia’s favour. In Europe last month, he lambasted Germany for supporting NS2, then acknowledged the commercial reality that America wants to sell more LNG to Europe and will compete with Russian gas. His mixed message was typically confusing. But it suggested one important conclusion: the Trump administration is not itching to use the biggest weapon it has in its arsenal to stop the pipeline: sanctions.

So will NS2 go ahead? Absent sanctions, probably yes. The consortium financing the project, which comprises Gazprom and its five backers, Uniper and Wintershall of Germany, OMV of Austria, Engie of France, and Royal Dutch Shell, the Anglo-Dutch supermajor, is in place. German industrial giants such as BASF consider it essential to secure Russian gas to compete with their American rivals—after all, piped gas is cheaper than LNG. And Europe’s own home-produced gas resources are diminishing. But if the project does go ahead it not only leaves Ukraine at the mercy of its Russian foe: it also makes Europe more dependent on Russian gas and pipelines at a time when its own supplies are dwindling. Germany has not yet woken up to that stark reality.