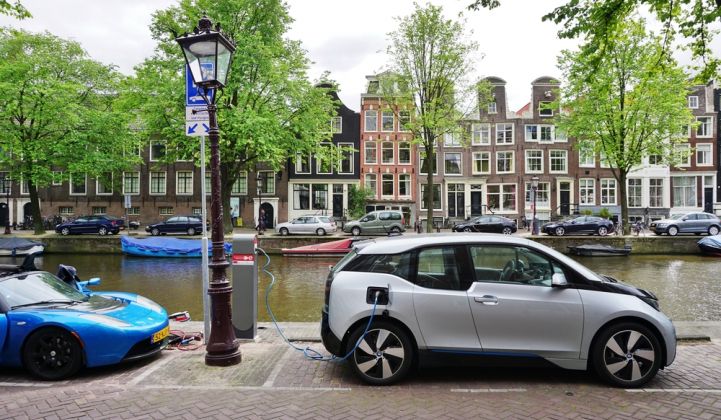 Battery manufacturers are jostling for a leadership position in Europe as electric vehicle sales gather momentum. Last month, it emerged that Tesla was in conversations with authorities in the Netherlands and two German states over a site for a European Gigafactory.

Germany is the front-runner for the facility, with the southwestern states of Rhineland-Palatinate and Saarland vying for attention from the Silicon Valley carmaker, according to a report in the The Wall Street Journal.

The facility will likely serve luxury carmaker BMW, which earlier inked a €4 billion ($4.7 billion) battery contract with CATL to provide cells for its electric Mini and upcoming iNext limo models.

Many of the firms aiming to get a foothold in Europe are Asian battery giants such as CATL. LG Chem of South Korea, for example, is looking to boost production of its lithium-nickel-manganese-cobalt oxide and lithium-manganese oxide batteries in Wroclaw, Poland. Samsung SDI, another South Korean company, has plans for increased manufacturing in Budapest, Hungary.

Native battery makers also have growing ambitions, though. Perhaps the most notable example is Northvolt, a Swedish company founded by former Tesla executives.

The business is aiming to install an initial 8 gigawatt-hours a year of production capacity at a facility it is building in Skellefteå, northeast Sweden. Across the battery market, the pace of activity is picking up as European carmakers foresee escalating electric vehicle sales.

According to EV Volumes, an electric vehicle sales database, the plug-in share of car sales is expected to grow to around 2.4 percent this year, compared to 1.7 percent in 2017, with automakers shifting around 432,000 units in 2018.

This compares to a forecast 2 percent rise and 350,000 units in the U.S. during 2018. Europe’s relatively faster sales growth appears to have led to jitters for some automakers, with a number seeking to tie up long-term battery supply deals.

“It’s quite unusual that you’ve got a lot of companies moving so far up the supply chain,” he said. “They are trying to mitigate their risk in the future when there is going to be a fight for supply and costs could become a major issue for them. It’s a strategic play.”

When CATL announced its investment in Germany, for example, German Chancellor Angela Merkel lost no time in welcoming the move, while also throwing down the gauntlet to local contenders. “If we could do it ourselves, then I would not be upset,” she said.

But according to Julian Jansen, a senior market analyst for energy storage at IHS Markit, the window of opportunity for homegrown European battery manufacturing is closing.

“In principle it is logical to strategically position battery cell manufacturing for the electric vehicle industry closer to the end users such as the major German automotive manufacturers,” he said.

The need to reduce transport and logistical costs would likely drive growth in European battery manufacturing by major South Korean and Chinese players, he added.

“However, in terms of building up large-scale domestic battery cell manufacturing, I believe Europe has missed its opportunity and public funding and subsidies would go to waste,” he commented.

Europe was behind Asia in the significant levels of investment needed to ramp up manufacturing capacity, Jansen said.

European manufacturers could still have a role to play in making specialized, high-value batteries with individualized module assembly, he said, “but not producing standardized cells to be used in electric vehicles, which have become commoditized.”