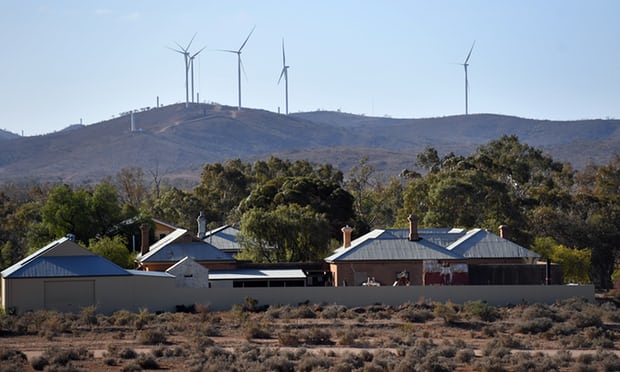 More than 70% of Australians want the government to set a high renewable energy target to put downward pressure on power prices, according to a new poll.

The ReachTel poll, commissioned by Greenpeace, was released on Monday as progressive campaign group GetUp and environmentalists stepped up pressure on the Victorian and Queensland governments to block the national energy guarantee and business groups called for it to be approved.

The federal environment minister, Josh Frydenberg, faces a difficult balancing act ahead of Friday’s meeting with states and territories to discuss the national energy guarantee, which imposes reliability and emissions reduction obligations on power retailers from 2020.

While Victoria, Queensland and the Labor-Greens government in the Australian Capital Territory are insisting on a mechanism for higher emissions reduction targets, Coalition conservatives have threatened to vote against it in the party room and in parliament if the emissions reduction component of the Neg is strengthened.

A group of peak business groups – including the Business Council of Australia, Australian Industry Group, Australian Chamber of Commerce and Industry and National Farmers Federation – have weighed in to issue a joint call to “put aside politics and ideology” and support the Neg.

“Business and industry need policy certainty and stability in the energy sector,” they said in a statement on Monday.

“There can be no further delays. A decade of policy uncertainty has only resulted in higher electricity prices and a less stable and reliable energy system.”

The business groups urged the council of Australian governments energy council to support the Neg “to provide the investor confidence needed to make the important, long-term decisions for a reliable, affordable and clean energy system”.

“Now is the time to act in Australia’s national interest. Australian households and businesses cannot afford the costs of yet another cycle of political sparring, indecision and inaction.”

But Greenpeace Australia’s Pacific head of research and investigations, Nikola Casule, said that Australians “want lower electricity prices and the way to achieve that is to get more renewables in the energy mix”.

According to the ReachTel poll, when told that energy market analyst Reputex found that more renewables in the energy mix lowers electricity prices, more than 70% of respondents agreed that “Australia should set an ambitious renewable energy target to help put downward pressure on electricity prices”.

Final modelling by the Energy Security Board found the national energy guarantee will drive a slight increase in the share of renewables in the electricity market compared to a scenario where the policy isn’t implemented.

The ESB’s chair, Kerry Schott, has also pointedly warned the wavering members of the Coag energy council that delaying agreement on the Neg will “prolong the current investment uncertainty, and deny customers more affordable energy”.

On Monday Victoria, Queensland and the ACT will resolve their final negotiating positions on the Neg.

The Victorian premier, Daniel Andrews, has stepped up pressure on the Turnbull government, suggesting he won’t support the Neg unless the federal government proves it can win support within the Coalition party room.

“I think we’re right to say we want the prime minister to demonstrate he’s got the numbers in his own show before we start signing anything,” Andrews told reporters in Melbourne on Sunday.

Frydenberg urged Labor to sign up to the Neg, warning “the time for excuses is over” and noting they had “been consulted and involved in the development of this policy every step of the way”.

“Never before has there been an energy policy that has attracted such broad support from manufacturers, miners, farmers, small business, consumer groups and the energy industry,” he said.

“The question for Labor states this Friday is will they listen to the experts and deliver lower power prices for their communities or cave into the Greens and prolong the investor uncertainty.”

Over the weekend the former Liberal prime minister John Howard, lent support for the Neg, telling the Australia it is “the most achievable and desirable outcome given where we are”.