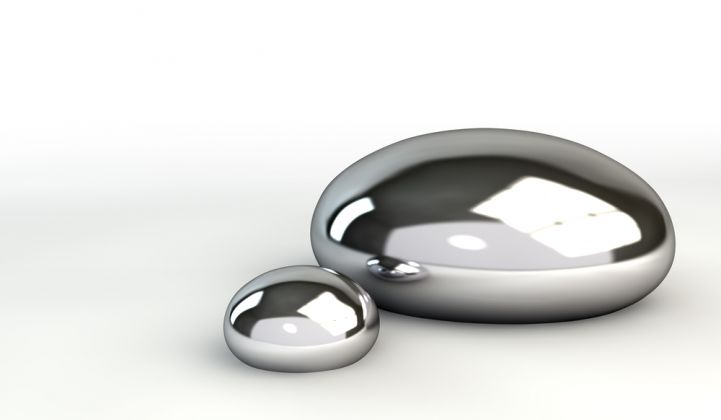 Among the ranks of lithium-ion alternatives these days, simply staying alive counts as above average.

Ambri, the liquid metal battery startup spun out of MIT materials research, has achieved that distinction with flying colors. After halting commercialization to address a technical problem with the seals on its high-temperature battery cells, the company started afresh with a new, lower-cost chemistry.

A year and a half has passed, and Ambri recently received funding from existing investors based on its demonstration of initial progress, said Chief Commercial Officer Adam Briggs, though he wouldn’t specify who invested or how much.

That money is the first commitment of a round intended to carry the company to commercial deployment. Previously Ambri had raised more than $50 million in venture capital from investors KLP Enterprises, the family office of Karen Pritzker and Michael Vlock, Building Insurance Bern, Khosla Ventures, Bill Gates and French energy giant Total.

Some of the new funds will support hiring staff.

The company brought in a new executive chairman, Dan Leff, to lead the company; he has served at several cleantech enterprises, including storage and software company Viridity Energy. CEO Phil Giudice is retiring — not because of any performance-related issues, Briggs noted, but to spend more time with his family.

Briggs himself joined in July from NEC Energy Solutions, where he held the CCO role.

Ambri also has begun pursuing partnerships with developers and integrators to vet the batteries’ performance when they become available. Such partnerships are crucial for tech startups that need to find bankable names to stand behind battery performance guarantees.

If Ambri has learned anything from its earlier misadventures, it’s to avoid making overly optimistic commitments on production schedule and battery performance.

The company pledged in a 2016 interview with GTM that it would deploy 500 kilowatt-hour systems with customers in 2018. That’s not going to happen, but the company now is aiming to ship its 10-foot cube commercial units in 2020 for proof-of-concept field deployments.

The delay isn’t necessarily a bad thing for the company, as it gives the market time to open up for longer-duration batteries. Recent storage projects have gravitated toward the four-hour mark; Ambri is shooting for economical operations from four to 12 hours of duration, Briggs said.

Tech startups like Ambri have to break through the chicken-and-egg problem: customers aren’t buying longer duration storage because there hasn’t been much available, and the few companies making it have trouble selling because so few are buying it.

Demand for batteries that last longer than conventional lithium-ion will pick up once well-priced options exist, Briggs argued.

“People are limiting the duration that they’re asking for because they realize asking for greater would push the economics into a difficult spot,” he said. “But there are lots of applications where if they could have gotten longer-duration for the same money or less, they would have done it.”

The extended period of R&D has given Ambri time to see how the lithium-ion market has evolved. Prices over the last decade have fallen faster than almost anyone predicted, which has bedeviled those startups that hoped to undercut the conventional product by using cheaper alternative chemistries.

When Ambri got started, the lithium-ion price point to beat was around $1,000 per kilowatt-hour. Advances in mainstream batteries have already blown that out of the water, no risky new technology needed.

A performance issue with the molten metal battery’s high-temperature seal prompted Ambri to cut staff by 25 percent in late 2015.

In the ensuing pause, the scientists solved two problems at once, Briggs said: they found a new chemistry that works better with the seal and has “much lower material costs.”

Briggs declined to name the new chemistry, but said its cost of active materials is dramatically less than lithium-ion. Of course, lithium-ion has a big head-start in economies of scale. One advantage Ambri might have in catching up is the relative simplicity of its manufacturing process.

“The cost to build a comparable lithium-ion plant these days is roughly $5 billion,” he said. “We’re well less than an order of magnitude below that.”

The company is confident enough in the simplicity of its design that it hasn’t ruled out the prospect of building its own factory, rather than contracting that out. Many cleantech startups in the boomtimes of the early 2010s spent hundreds of millions on factory building and went bankrupt shortly thereafter.

More recently, bankruptcies have thinned out the long-duration ecosystem in the last year and a half.

Aquion’s saltwater battery play went under water; Alevo closed down its mysterious operation; LightSail ran out of cash for its compressed air storage; ViZn Energy laid off all but two staff in March to look for new funding for its flow battery.

Despite the bleak accomplishments of the sector so far, Briggs expressed confidence that once his product gets to market, the customers will come.

“If you can demonstrate that you’ve got a battery that’s significantly less expensive than lithium-ion and can perform over a long lifetime with limited degradation, that’s attractive to people,” he said.

If all goes as planned and no new engineering surprises appear, Ambri will have a chance to prove that in the dawn of the 2020s.