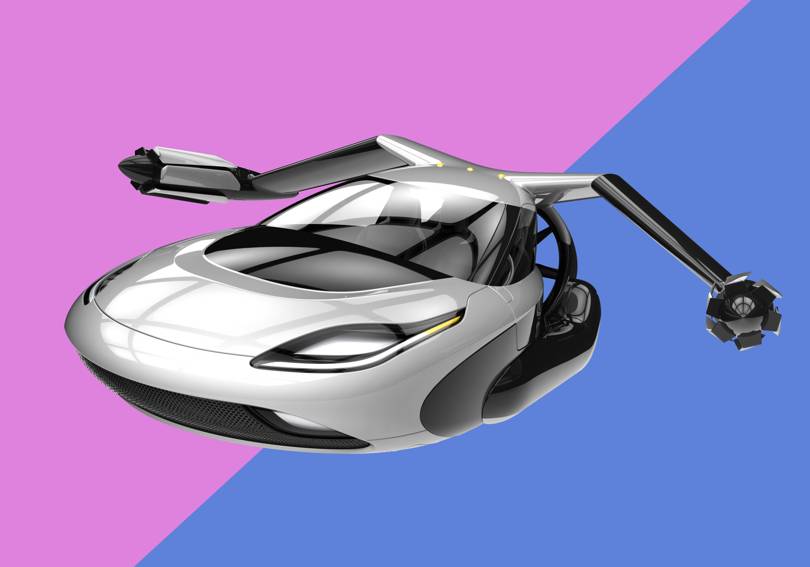 In November 2017, at Lisbon’s annual Web Summit conference, Uber’s chief product officer Jeff Holden unveiled a promotional video for Uber Elevate, its flying taxis initiative. The glossy CGI trailer shows a woman order an Uber, stroll up to a skyport atop an elegant skyscraper, then enjoy a pleasant, near-silent flight home in a Blade Runner-esque aircraft, watching the earth-bound traffic crawling below. It ends with a slogan: “Coming sooner than you think”. Uber says it plans to begin testing Elevate in Los Angeles, Dallas-Fort Worth and Dubai in 2020, with commercial operations beginning in 2023 – just five years from now.

We’ve been dreaming of – call them flying cars, personal drones, Uncrewed Aerial Vehicles, whatever you like – for more than 100 years. But if you believe the hype, they are finally, almost certainly, very nearly, here. More than a dozen companies are working on bringing the technology to market: alongside Uber are Kitty Hawk and Opener, two projects backed by Google’s Larry Page; China’s E-Hang; Germany’s Lilium; Volocopter; Joby Aviation, and more. Then there are projects from aviation giants like Airbus, Rolls Royce, and Boeing.

These lofty endeavours have a few things in common: they’re mostly pushing drone-like vertical take-off-and-landing (eVTOL) solutions they promise will be clean, quiet, and safe. They all envision a future where the skies are filled with efficient, autonomous flying machines, ferrying you conveniently from place to place at the push of a button. And they’re all promising it soon.

There’s only one problem: as Celina Mikolajczak, Uber’s director of engineering for energy storage systems, told an international battery conference in March: “The battery we need to do this really well… does not exist.”

In electric cars, as in all modern electronics, lithium-ion batteries dominate. But in aviation, batteries haven’t taken off for a simple reason: they’re too heavy. To put it in perspective, the 100 kilowatt hour battery pack in a Tesla Model S weighs 540 kilograms. Today’s two-seater combustion engine aircraft can weigh as little as 640kg in total. With lithium-ion, eventually the benefits of additional capacity are quite literally outweighed by their additional heft. And, while there continue to be incremental advances in lithium-ion batteries, many experts think that the technology is nearing its limits in energy density. That’s partly why aviation giant Airbus recently abandoned its all-electric E-Fan concept to pursue hybrids.

“Current battery technology is too heavy for our power requirement. The energy density of the battery cells are not quite where we need them to be,” says Jeff Bennett, aerospace project manager at Ohio-based Workhorse, creators of the Surefly. “It really comes down to weight and flying time. With today’s battery technology, you might get 30 minutes of flight time,” says David Snydacker, a battery consultant at Dosima Research.

So far, eVTOL startups have promised ranges that vary from 25 minutes’ flight time in the Ehang 184 to 300km for the Lilium Jet. That’s carrying a very small amount of weight – most are one-to-two seaters, with strict weight limits.

The range figures are further complicated by international aviation regulations, which dictate that aircraft must carry sufficient fuel reserves to reach an alternate landing strip in an emergency.“You are required today to have a 30-minute reserve on your fuel. If you want to do a 20 minute flight, you would have to take off with enough power for 50 minutes. That’s doubling or tripling the amount of battery storage you need on the vehicle,” explains Simon Bendrey, chief engineer at Slovakia-based startup Aeromobil. Its flying car, which costs $1.2million, has a range of 750km, and runs on petrol. Some companies, like Opener, include reserves in their range estimates (40 to 64km for its recently announced Blackfly) but others are so far leaving the numbers perhaps deliberately vague.

Then there’s charging: current eVTOL concepts estimate charging times ranging from 25 minutes to several hours. That might be fine for personal use, but uneconomical for Uber’s utopian future of flying taxis. And that’s even before you add the grid infrastructure for charging dozens of flying vehicles at existing airports, let alone networks of purpose-built urban skyports.

These challenges are exactly why Uber’s Mikolajczak is asking the world’s battery experts for help – she knows its plans are unachievable with existing solutions. “The metric you’re looking for is watt-hours per kilogram (Wh/kg),” says Snydacker. “If you look at the best current [lithium-ion] batteries from Panasonic, they’re at around 240Wh/kg.” Elevate is after a battery that can deliver 300-400Wh/kg, charge in five minutes. Then, it says, it can offer a range of 100km, which it calculates makes flying Uber fleets feasible.

One solution could be chemistries in which the liquid polymer in lithium-ion is replaced by a solid. Solid state batteries are more energy dense and charge more quickly, and as a bonus, would be safer than lithium-ion, which have a tendency to explode when punctured, as might be the case in a crash. (Remember when the Samsung Note 7 was banned on flights? Imagine the plane was a Note 7.) “With solid state you can double the energy per volume,” says Snydacker. “There’s probably a dozen serious players; Solid Energy, SolidPower, Quantumscape. We’re about to see the first wave of solid state batteries in drones.”

However solid state batteries of the size needed for electric vehicles are still several years away, at least, and there are other performance hurdles. “Solid-state batteries have shown higher energy density, making it possible for aircraft to further increase their battery life, but the performance of its other aspects such as the discharge power of solid-state batteries still needs to be improved,” says Ehang co-founder Derrick Xiong.

One other contender, Snydacker says, could be lithium-sulphur. “Lithium sulphur doesn’t do very well on energy per litre, but the sulphur cathode can be lightweight,” he says. In fact, in 2014 Airbus flew a high-altitude solar plane running with lithium-sulphur batteries for 11 days; those batteries reportedly hit 350Wh/kg. The manufacturer, Sion Power, just announced a new ultra-lightweight lithium-based cell that it claims can hit 500Wh/kg, with plans to begin production in 2018.

An alternative approach is to focus on faster charging time. Fast-charging technology is progressing quickly: today’s EV superchargers can hit around 150kW, allowing a Tesla to reach around 50 per cent capacity in 20 minutes. Much faster and you can damage the battery, or limit its lifespan. (Battery swapping has been tried in cars, but mostly abandoned for being too expensive and impractical.)

“If you have an expensive aircraft, maybe you could tolerate five to ten minutes of charging,” says Snydacker of Uber’s plans. “We’re on track to get ten minute charging with a silicon anode; the challenge is doing that without wearing out the capacity over time.” Uber’s Elevate white paper envisions ‘vertiports’ will need both fast chargers to top up batteries quickly between flights to boost range as well as slower-rate charging for empty vehicles. But once again, it’s requirements are still several years away from the market.

“The battery tech we need is currently being developed and should be ready in about five to ten years,” estimates Workhorse’s Jeff Bennett. Perhaps no wonder that a famed battery researcher, upon hearing Mikolajczak’s talk, reportedly asked, “do you have a backup plan?”

Of course, this being Uber, there’s always the third option: bend the rules. Today’s aviation requirements are designed for planes and helicopters, not oversized drones with distributed electric propulsion systems. Or flying cars. “If the nearest ports are only five or ten minutes from the next one, you could change the [30 minute reserve] rules to fit a vehicle that might have different requirements,” says Aeromobil’s Bendrey. That might enable short duration passenger flights to run with small redundancies – perhaps just enough to land in a nearby safe place.

But then, that presents its own set of challenges. “We would need low-level air traffic control. That would all need to be created: the infrastructure, the regulation, and the authorities that run those airspaces.” In other words: it’s not just the batteries for flying cars that don’t exist yet. As Uber says: sooner than you think. Just perhaps not as soon as you’d hoped.