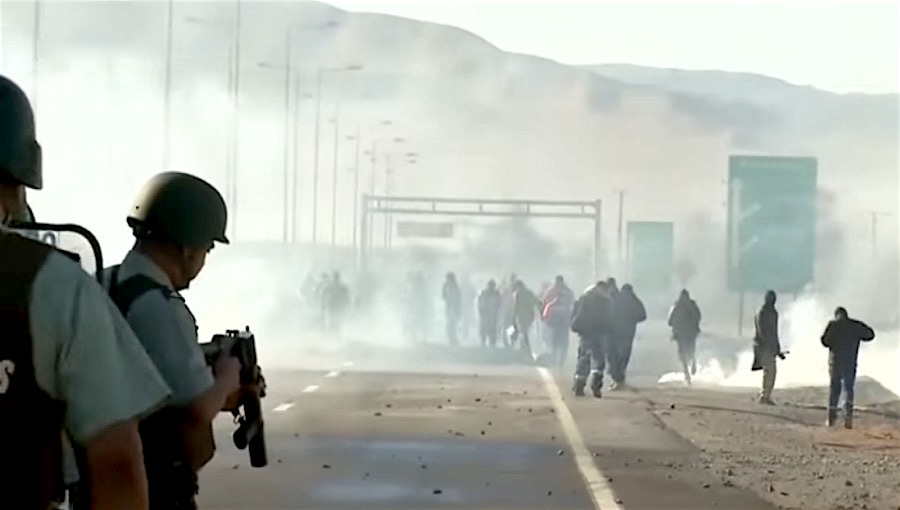 Copper’s fightback came to a screeching halt on Wednesday trading down 3.7% on news the Trump administration plans to propose a 25% tariff on $200 billion of imported Chinese goods intensifying an already acrimonious trade dispute with Beijing.

Copper touched $2.7260 or $6,010 a tonne on the Comex market in New York in massive volumes with contracts totalling 1.4m tonnes worth $8.3 billion changing hands by early afternoon. Copper is now down 18% or $1,340 a tonne since hitting four-year highs early June.

Fears over the impact of a trade war with China, responsible for half the world’s metal consumption, overshadowed news that workers at the world’s largest copper mine are planning to down tools for at least 30 days if part-owner operator BHP doesn’t agree to their demands.

If talks between BHP and the union at Escondida in Chile, responsible for nearly 5% of primary global copper supply, result in a strike it won’t be a short one, Union No. 1 President Patricio Tapia said in an interview with Bloomberg in Antofagasta Tuesday.

“It is painful to take such an extreme measure, but we would be doing it to avoid losing our benefits,” Tapia said. “Our first priority is still to talk, dialog. There’s little time left, but we don’t want a strike.”

Workers plan to use a provision in Chile’s new labor code to retain benefits. After 30 days, some would return to work individually, effectively accepting the company’s last offer. Others would stay on strike, allowing the union to call for an 18-month extension of the previous contract.

Then the union representing all workers, including those who abandoned the strike, would negotiate using the previous contract and all of its benefits as the starting point.

“Our members would have the 1.5 percent increase in wages that the company is offering now,” Tapia said. “We keep our benefits intact and the company still has to pay; that’s our strategy.”

Chile’s labor authority questioned the strategy in a letter Tuesday, saying workers who abandon the strike individually would have to negotiate after 36 months and can’t be part of a collective negotiation. BHP wasn’t immediately available to comment.

The union remains confident the strategy is valid, Tapia said.

Escondida workers will finish voting Wednesday on whether to accept or reject the company’s offer for a collective contract. If they reject the offer, they will likely engage in five additional days of talks mediated by labor authorities, which could be extended for five more days. If no agreement is reached, a strike would start around mid-August.

The union is demanding a one-time bonus equivalent to 4% of dividends distributed to BHP shareholders in 2017 for a total of just under $4 billion (25.6B pesos). That works out to about $34,000 per worker and compares to the Anglo-Australian firms final offer of a bonus of nearly half that figure (13.5B pesos).

A 44-day strike in February-March last year crippled production at Escondida, which BHP expects will produce more than 1.2m tonnes in 2018.

Upcoming contract negotiations could also lead to outages at Chile’s state-owned Codelco operations which include the Andina, El Teniente, Salvador, Ministro Hales and Gaby mines and the Caletones smelter.

Earlier this week workers at Chuquicamata, Codelco’s second largest mine with output of more than 330kt last year, downed tools and blocked access to the property over a dispute with management.

Together with Escondida, the Chilean operations under threat of labour action have a capacity of 3m tonnes per year or nearly 15% annual global output.