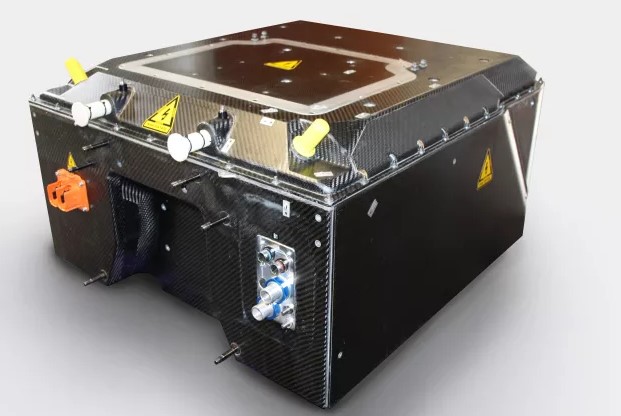 It weighs 440 pounds, it endures temperatures up to 140 degrees, and it’s been on a four-year stint that amounts to the same distance as going around the earth and then some. Not my luggage, despite what you might assume, but the absolute unit at the back of the first generation of Formula E race cars. Slapping the roof of this bad boy would earn you a disapproving look from the engineers but you can fit 33,865 miles of racing without a single failure inside it.

And the thing that’s extraordinary is it hasn’t changed since 2014.

These chunky boys have been a permanent feature of the Formula E paddock—not just the 40 inside the cars, but spares being wheeled round that you can get a good look at. They stand out because even on a flatbed trolley they come up to my waist, and are roughly the dimensions of a phone box, width-wise.

They had their swan song in New York a few weekends ago. The final race of Generation 1, the last time these troopers were going to power the cars that were built around them. The final of around 50 full charge cycles each undertakes during a season, blinking down to 1 and then zero percent for the last time.

Next year’s season, Formula E’s fifth, will see an updated battery powering the Gen 2 cars; only 110 pounds heavier, the speed of advancement since 2014 means it will go the race distance with no car swap. It almost doubles the energy storage of the first generation, dealing with 66 percent higher output and 100 percent higher regeneration than these were originally built for.

But the first effort shouldn’t go out unnoticed. It’s easy to get excited about the future, but the case could be made that these batteries were the unsung heroes of a rising global series, one that moves along with the race toward better, faster, longer-lasting batteries for everything from laptops to cars to e-cigarettes—the future of power itself.

When the battery was designed by Williams Advanced Engineering back in 2014, no one really knew if you could make a viable, believable electric race car. At the time, Formula One was still getting its head around having its own, relatively tiny batteries (or “energy stores” in case your masculinity was impinged by the concept of lithium-ion) and the idea of trying to bang something round at race-pace on electricity alone was pretty buck wild.

We’ve sort of forgotten that in the interim because it—slightly unexpectedly—worked. Forty cars using forty batteries went out at race one and every Eprix since.

They’ve got prospects beyond that, but in all the champagne and sponsorship, there’s an integral part of the cars that’s never got up on the podium. The batteries have stood fast for four seasons, despite doubts they could even work at the time.

There’ve only ever been two on-track battery failures, and none for the last two seasons. With only one allocated battery per car per season that’s a lot of mileage, before you even account for the constant charging and discharging they undergo.

From the outset, the spec of the battery was thus: 28kWh of lithium ion good times, discharging into and being charged from the powertrain of the cars during race conditions. That’s a hefty 45kWh (or so) less than the most basic Tesla, because the idea of Formula E is that it tests the kind of tech an average hatchback is going to work with, while extracting supercar-grade performance.

In fact it’s actually got less storage capacity than a 2016 Nissan Leaf, which rolls around with a mere 30kWh. The thing is, Formula E batteries aren’t going to output the charge it takes to tootle you round a journey to the supermarket and back; they’re going to slam it to the left, shake it to the right and probably lift and coast a bit on the straights depending on regenerative temperatures.

The life of a Formula E battery makes a road EV’s look trivial; smacked sideways into a barrier at 10 a.m.? Better be ready for qualifying at 12, kid. And the temperatures—they’re limited to a relatively safe 60C (140 degrees F) which Williams have confirmed to me they haven’t exceeded, but just for reference that’s five degrees celsius hotter than you need to fry an egg.

The Formula E battery could look a Tesla in the eyes and say “do it then,” and the Tesla would quietly overheat.

And the Formula E batteries are still going, in not just the race trim they were built for but at substantially higher performance.

Plenteous protein options for recovering drivers aside, these are some steamy hot boys that mostly race in temperatures above 80 degrees F (Marrakesh provided a strange rarity with snow over the Sahara last season) and are brutally cooled with dry ice in between rapid-fire sessions.

Which makes it all the more extraordinary that somehow the same unit has persisted for four years with only minor upgrades. Back when there was a lot of cynicism about whether a battery could survive racing conditions—or even hold enough power to go the distance.

There are people out there who straight up think if you crash an electric car you’ll be flooded with battery acid. Hoo boy, my friends; clearly none of them are Formula E viewers, where we routinely beat the cars around like they’re volleyballs and this is an extreme beach grudge match.

Nothing happened. Nick walked out of the car to have what looked like a fairly energetic word with Nico Prost; the battery didn’t explode or catch fire or fail, the car didn’t electrify, the survival cell wasn’t breached despite a 200 kilogram thing rattling around in the back of it as it did an impressive triple pike.

Looking at that 2014 crash it seems bonkers—not just because how the hell did Nick just get out of that but because the cars, the feel of the races, has changed so much since then.

That first race in Beijing was 53 miles. Not the shortest in the first season, which goes to Monaco at a mere 42 miles. At the time, the maximum race output was 150kW and the maximum regeneration (energy shoved back into the battery, recovered under braking) was a mere 100kW.

Both of those numbers are, again, quite modest for an electric car. A Tesla Model S, say, can output 311kW, for awhile. When the battery starts to reach the limits of its operating window, temperature-wise, the car will halve the available power output whereas a Formula E car is expected to continue to perform throughout the race, with the driver managing battery temperatures as much as possible.

Which makes it all the more extraordinary that the first-generation battery didn’t just service races of under 90km (56 miles) at low output and regeneration but went on to first increase race output (qualifying has always been higher) to 170kW in season two, then up regeneration by 50 percent in season three to 150kW followed by another race output increase in season four to 180kW.

At the same time, the race length kept extending—cars that had struggled to manage the power for 50 miles or so were pushed to over 68 miles in Berlin this year. Different powertrains, yes, but the same battery unit.

Second (No Half) Life

With battery lifetime and battery capacity such concerns in electric vehicle development, the generation one unit has to be held up as something extraordinary. The common wisdom is: range extension is possible, with better battery management and that output and regenerative extension is also possible but not both at the same time.

Especially not when, although the battery maker could take data from and advise teams they weren’t actually in control of the way the powertrains linking to their units were built or used. Imagine crafting, say, a perfect cake and then handing it over to a bunch of other people to bake. Only it’s 20 different people and they’re all insisting on doing it live on television using only straightening tongs while wearing rollerskates.

This battery’s gone racing more than 1,200 times and covered over 33,865 miles since the last on-track failure, back in 2015. It’s gone several times that in transit, across continents and on boats and planes, been frozen, been pushed to its upper heat limit. Eight thousand full discharges at circuits, which means 8,000 full charges (and then some, with regeneration) and these chunky guys are still going.

That’s a big deal. There’s a presumed lack of secondhand market for electric vehicles because battery degradation is supposed to be so severe. You could say “oh, well Formula E just throw them out after every race so of course they’re still going” but here’s the thing: they don’t.

Drivers are only allowed one battery per car per season. There’s a possibility to change it under one, 30-to-60 day forward-planned “joker” option but unsurprisingly, most teams don’t take that given the need to book in an FIA appointment for re-inspection. These aren’t throwaway items and although they’re not used every day, the race days are massively more intensive than any normal usage would ever push a battery to.

Battery lifespan and durability is no small part of the viability of electric vehicles as a whole. About half of the carbon involved in manufacturing an EV is on the battery which then immediately starts to even out, on most European energy grids, due to being able to use renewables for charging. Naysayers are quick to point out that that will be neutralized or even worsened, compared to an internal combustion vehicle, if batteries need regular replacement.

Using Formula E as the Petri dish it’s supposed to be for the electric car industry, this very much indicates they won’t. A well-treated Nissan or NIO or BMWi battery, most of which are guaranteed for the best part of a decade in any case, could even have its life extended through the sort of simple cooling and bumper updates Williams made in 2016.

Having mastered the challenge of letting drivers loose on their carefully crafted tech in Formula E, Willams is now going on to electrify World Rallycross. Just in case hurling batteries at concrete wasn’t enough, they’re now leaving that game to McLaren and moving on to shaking batteries around like they’re trying to make a lithium-ion frappuccino. Extra large.

Battery limitations are cited as major concerns around electric vehicles, to the point that people really thought this was going to stop Formula E, was going to prevent the racing. It hasn’t. It’s pointless to speculate how much longer the first-gen batteries could have carried on, if the chassis wasn’t changing but there’s no doubt it was still getting the job done by the end of season four, lap records set on every track.

Yes, they’re big for 28kWh of power. Yes, these extra-large energy stores would dwarf your coffee table and you’re not likely to get far trying to carry one on foot. But if these first four seasons were the test of whether lithium-ion was tough enough to do a reliable job in vehicles, then they’ve passed with extra credit.