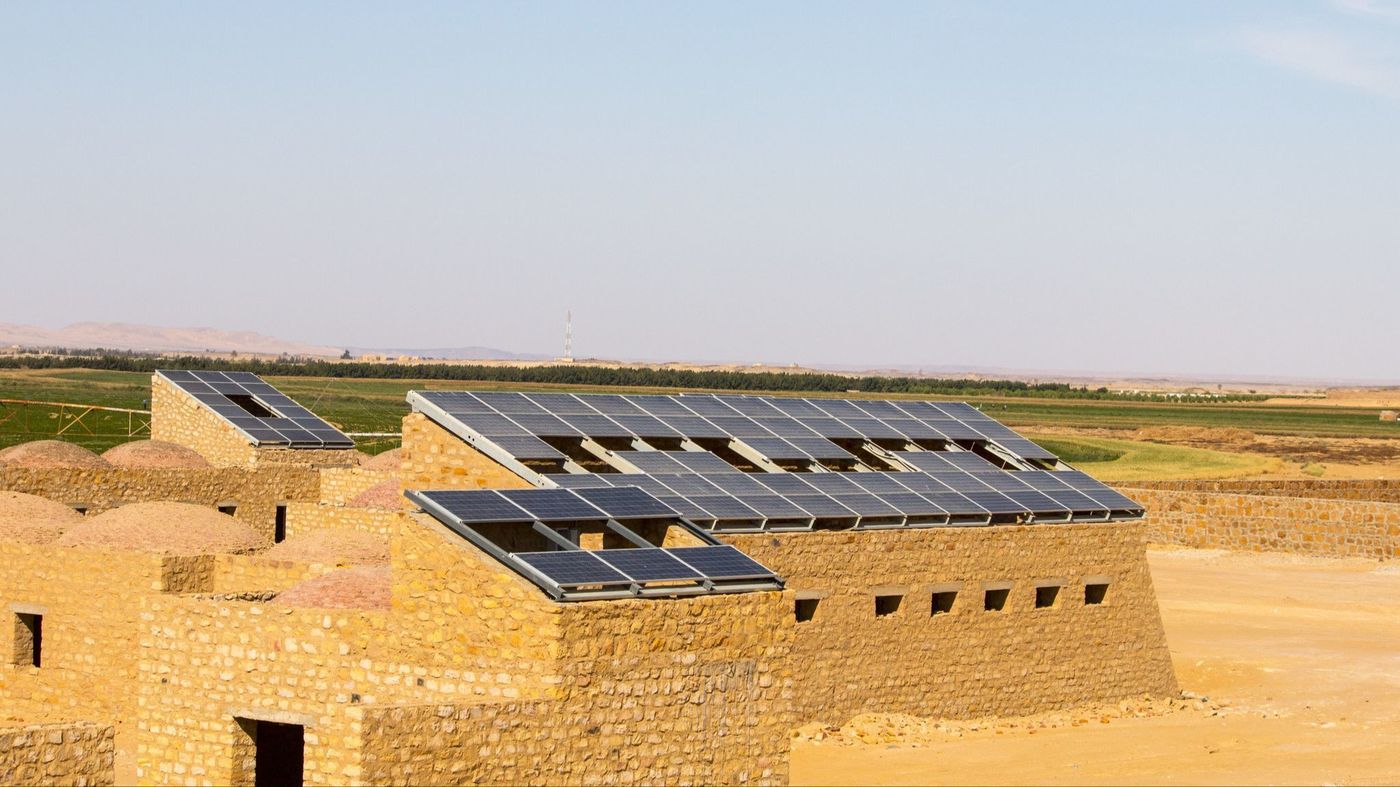 In 1913 on the outskirts of Cairo, an inventor from Philadelphia named Frank Shuman built the world’s first solar thermal power station, using the abundant Egyptian sunshine to pump 6,000 gallons of water a minute from the Nile to irrigate a nearby cotton field.

World War I and the discovery of cheap oil derailed Shuman’s dream of replicating his “sun power plant” on a grand scale and eventually producing enough energy to challenge the world’s dependence on coal.

More than a century later, that vision has been resurrected. The world’s largest solar park, the $2.8-billion Benban complex, is set to open next year 400 miles south of Cairo in Egypt’s Western Desert.

It will single-handedly put Egypt on the clean energy map.

That is no small feat for a country that’s been hobbled by its longtime addiction to cheap, state-subsidized fossil fuels and currently gets more than 90% of its electricity from oil and natural gas.

But the prospects for green energy here have never been better as the government has been scaling back fossil-fuel subsidies in line with an International Monetary Fund-backed reform program that aims to rescue an economy ravaged by political upheaval. Meanwhile, the rapidly falling cost of equipment for solar and wind power has increased their allure.

“This is a big deal,” said Benjamin Attia, a solar analyst with U.S.-based Wood Mackenzie, talking about the Benban complex. “I can’t think of another example where so many big players have come together to fill the gap.”

Officials and international finance organizations tout the potential of Egypt’s renewables sector to create jobs and growth as well as reduce emissions in a country whose capital was recently named the second-most polluted large city on Earth by the World Health Organization.

The government’s aim is that by 2025 Egypt will get 42% of its electricity from renewable sources.

The Benban complex, which will be operated by major energy companies from around the world, is expected to generate as much as 1.8 gigawatts of electricity, or enough to power hundreds of thousands of homes and businesses. It will consist of 30 separate solar plants, the first of which began running in December, and employ 4,000 workers.

The U.S. government is backing a local program to train hundreds of technical school students in solar and wind energy.

Driving all these projects is the not-so-distant memory of the electricity crisis that gripped Egypt in the years following the 2011 revolution. Factory and shop closures from rolling blackouts fed mounting public anger that culminated in the 2013 ouster of President Mohamed Morsi, whose prime minister once infamously suggested that Egyptians confront the power shortage by wearing cotton and sleeping in one room.

Today residents no longer face nightly outages, but Egypt — once a gas exporter— must import expensive liquefied natural gas to meet the energy needs of its 96 million people. And power demand is expected to more than double by 2030, much faster than in any other country in the region, according to Victoria Cuming of Bloomberg New Energy Finance.

In preparation, Egypt launched a scheme in 2014 to enable private players to sell power to the public grid, jump-starting its clean energy market, which last year saw a 500% increase in investment.

But if flashy green energy megaprojects like Benban are drawing much of the attention, small businesses are responsible for 80% of private-sector jobs, said Khaled Gasser, who founded the Solar Energy Development Assn., a local industry group. “This is the real market,” he said.

Driven by the idealism and lack of compelling job opportunities that followed the 2011 revolution, several clean-energy entrepreneurs have quietly established a grass-roots market in Egypt.

Ahmed Zahran, 38, started KarmSolar with four friends working out of a cafe after his old bosses fled the country. He had tried in vain to persuade the private equity firm to invest in clean energy. “We were fired by an … who represented everything we hated about this country, so we decided, let’s do it ourselves,” said Zahran, who figured solar power was a no-brainer in a nation that is more than 90% desert.

With private investments, the company began by making solar water pumps for off-grid desert farms that traditionally rely on diesel to pull water from beneath the sand. Now with more than 80 employees, it also builds solar stations to power poultry factories and malls under so-called power-purchasing agreements.

Zahran has also delved into green architecture, designing off-grid eco-lodges and a sustainable “worker’s village” for seasonal farmhands in Egypt’s Bahayira Oasis, a desert outpost of olive and date groves.

As the government has made good on its promise to gradually cut energy subsidies — on July 1 electricity prices rose an average of 26% — more companies are exploring the possibility of adding solar systems to the apartment buildings where most of the country’s urban population lives.

The country’s green energy start-ups are grappling with the same problems that have bedeviled small businesses here for years. In an effort to confront a big one — lack of financing — the Central Bank launched a low-interest loan program in 2016 that aimed to encourage small players, especially in key industries like renewable energy.

Hatem Gamal used it to grow his waste-to-energy startup, Empower, which currently operates two plants, in a wastewater treatment facility and a beef farm, that turn human sludge and animal waste into biogas that he sells to the government. The company has four more plants under construction.

One thing that hasn’t changed: the layers of bureaucracy that businesses must navigate. Gamal had to get licenses or permissions from at least 10 government agencies. He’s become so adept at dealing with red tape that he has a printer in his car.

“People say, ‘You must know someone’ or ‘You must have bribed someone’ or ‘That 5% loan isn’t real,’ ” Gamal said. “But the opportunities are there. I just never take ‘no’ for an answer.”