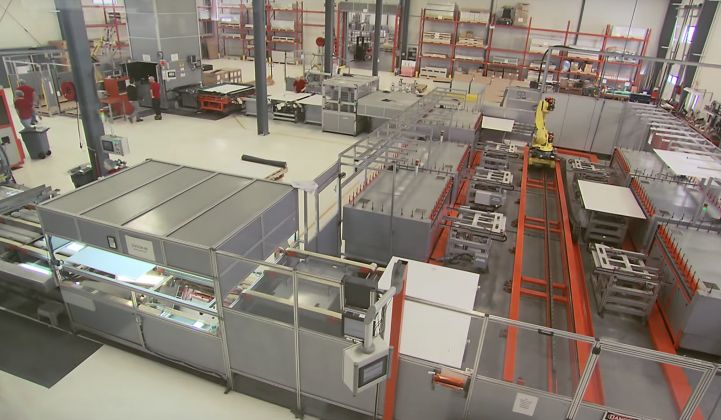 JinkoSolar, Hanwha Q Cells, FirstSolar, LG and SunPower have announced moves to expand U.S. operations in recent months. But Heliene’s is the first foreign-owned facility to move into production after the Trump administration’s Section 201 decision.

Though Heliene made the decision to move into the U.S. before the 30 percent tariffs were imposed, producing modules in Minnesota will help the company circumvent costly duties.

“We didn’t do any announcement,” said company president Martin Pochtaruk. “We just got it done.”

In April of last year, Heliene took over a facility, located in Minnesota’s industrial Iron Range, from the now-defunct Silicon Energy. After investing $22 million to update the “vintage” equipment, Pochtaruk said Heliene “set up a brand new 2018 Ferrari of manufacturing” that’s slated to begin production August 27.

Pochtaruk said the 140-megawatt capacity facility will create 130 jobs. The company received over $3 million from the state to update the plant.

Minnesota makes up a large portion of Heliene’s business. Last year, 60 percent of the modules it manufactured and sold went to installations in the state. The company’s Canadian headquarters sits east of Lake Superior and close to the border of Michigan’s Upper Peninsula, so Pochtaruk said the jump to the U.S. made sense even before tariffs.

But according to Pochtaruk, tariffs made U.S. module manufacturing in “the middle of the wilderness” even more enticing because the duties severely undercut profits.

“We’re paying it through our nose,” said Pochtaruk. “For the Canadian business, it’s eating up most of the profitability.”

Canada is not currently exempt from solar tariffs, though the administration was reportedly considering such a move in January.

In February, Canadian solar companies including Heliene sued the administration and argued they should not be subject to tariffs. The suit claimed the tariffs violated the North American Free Trade Agreement.

This month, the Trudeau government asked for a NAFTA review of the tariffs. Earlier in July, the Trump administration released goals to renegotiate that pact, and specifically suggested eliminating a portion that allows Mexico and Canada exemptions from certain administrative tariff decisions. Talks are ongoing, with the administration now saying a revamped agreement could be released this fall.

Heliene hopes its manufacturing facility will allow more flexibility in the U.S. market before then, and overcome the “noise” created by the Trump administration.

“For this new and different administration, NAFTA doesn’t mean much,” said Pochtaruk. “A made-in-America product is what will make the difference because it’s the only product that doesn’t have a tariff.”

The company also plans to remodel an old Suniva factory in Sheridan, Oregon. Heliene plans to invest $1 million in equipment and $8 million to $9 million in working capital at that location. With a projected November opening, the facility will have the capacity to produce 75 megawatts per year.

Heliene is closely watching Canada’s challenges to the tariffs. “We are looking into and investigating all avenues,” said Pochtaruk.