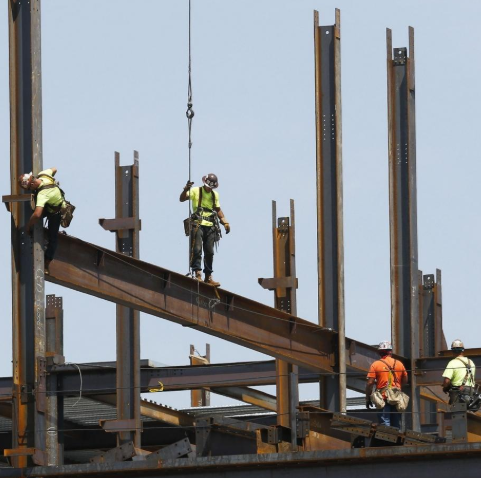 Columbus won’t need steel for the next phase of the Route 315/West North Broadway interchange project until February, but it’s putting in its order now.

City officials say it recently has become harder to acquire the materials they need for public projects since federal steel tariffs took effect, and they have been unable to get waivers for federal Buy American policies that require domestically produced parts for public projects.

It could take six to eight months to obtain the girders, bearings and other steel parts for the highway ramp, so the city needs to order now — months before it even selects a contractor — if the project is going to stay on track to open in May.

“Currently, right now in the country, steel is at a premium,” Public Service Director Jennifer Gallagher told City Council members before they approved spending $1.6 million on those parts last week.

Tariffs that President Donald Trump’s administration announced in May could be a boon to U.S. steel producers, but they also could make it more expensive for local governments to pay for public infrastructure.

And the tariffs could jeopardize timelines for completing projects if steel orders aren’t made early enough. Fabricators that take raw steel and turn it into usable components are seeing delays in acquiring the material because domestic producers have been overwhelmed by demand.

“For us to get the raw plate material to fabricate it used to be we would order steel today and get the steel two months later. Now, it’s five to six months,” said Evan Morrison, vice president of Ohio Structures Inc. in Canfield, southwest of Youngstown.

Buying steel for a construction project is an unusual step for the city. Typically, contractors include materials in their bids, but the city won’t put the Route 315/West North Broadway project’s second phase out to bid until the fall. By then, it could be too late to get steel in time.

“It’s just like anything else: You place an order and you get put in line,” said Jim Pajk, the city’s assistant administrator for design and construction. “You’ve got to get yourself in line as early as you can. We’re seeing that line was stretching out.”

Morrison said his company is considering bidding on the city’s steel contract for the interchange, but it already has asked whether the delivery date can be extended. Even if fabricators already have placed orders, barges, rail lines and trucks that deliver it are backed up, too, he said.

“There’s no fabricator that’s going to have this much inventory on hand,” he said.

Ohio Contractors Association President Chris Runyan said he hasn’t heard about significant delays on projects yet because contractors have submitted their orders early. But project price tags are rising as contractors bake steel price volatility into their bids, he said.

When the city received bids for a new police substation and fire station, the cost was more than $2 million higher than expected, said Joe Lombardi, the city’s finance director. Council members approved two contracts totaling about $18 million for those projects last week.

Construction prices have been increasing steadily for the past several years, and the Ohio Department of Transportation has “not seen recently anything that would be out of line with that trend,” spokesman Matt Bruning said.

“It sort of feeds on itself, because the more you delay, these costs aren’t going down. The delay is costing our communities on the residual side by missing opportunities now,” he said.

Columbus also is contending with potential delays because the Buy American policies are making it harder to acquire nuts and bolts for a project that would allow the city to treat more raw sewage at its Southerly Wastewater Treatment Plant during heavy rain.

The city is paying for the project using U.S. Environmental Protection Agency loans, but it has received waivers for the Buy American policy for nuts and bolts in previous years. Purchasing those components from domestic producers is backed up by about four months, said John Ivanic, assistant director in the Department of Public Utilities.

Buy American policies have existed for decades, but Trump issued an executive order in 2017 that doubles down on them. Under that order, the executive branch can require those who receive federal financial assistance to use materials produced in the United States.

The federal EPA has taken public comments on providing waivers to Buy American policies in 2018, but it has not taken any formal action, said James Lee, a spokesman for the Ohio EPA. Columbus is the only loan recipient that has expressed difficulty in complying with the requirement, he said.

“The policies were poorly executed, the tariffs and such. We’re all dealing with that. The people who are really suffering are the workers in the construction industry because these projects have to be scaled back,” said Robin Davis, a spokeswoman for Mayor Andrew J. Ginther.