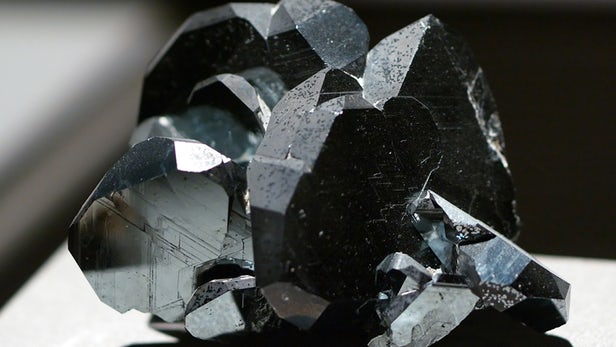 When it comes to new materials, thin is most definitely in. Brazilian researchers have created a new two-dimensional material called hematene, which is made up of sheets of iron ore just three atoms thick. And as is often the case with 2D materials, hematene seems to have different properties to its regular form.

The most famous 2D material is undoubtedly graphene, a slimmed-down form of carbon that’s extremely strong, lightweight, and electrically and thermally conductive. But it’s far from alone in that dimension – recently, scientists have also created 2D sheets of black phosphorus, gallium, molybdenum disulfide and chromium triiodide, all boasting a wide range of unusual properties.

The newest member of the family, hematene, comes from hematite, a naturally-occurring mineral that provides our main industrial source of iron. By subjecting the ore to a process called liquid-phase exfoliation, the team created sheets just three iron and oxygen atoms thick.

The researchers then studied the properties of the material, to see how those of its 2D form differed from the regular 3D stuff. Hematene was found to be ferromagnetic, as opposed to the antiferromagnetic nature of hematite. It was also shown to have the potential to be a good photocatalyst, able to use sunlight to speed up chemical reactions.

Absorbing sunlight from the ultraviolet to the yellow-orange part of the spectrum, both hematite and hematene can be photocatalytic, but the former is too weak to tap into. Hematene, on the other hand, fared better, thanks to its thinness. When photons strike the material, the positive and negative charges that are generated don’t have far to travel to get to the surface. The researchers improved its performance by pairing hematene with arrays of titanium dioxide nanotubes.

“Hematene may be an efficient photocatalyst, especially for splitting water into hydrogen and oxygen, and could also serve as an ultrathin magnetic material for spintronic-based devices,” says Douglas Soares Galvão, an author of the study.

The team says that other iron oxides and related materials could also get the 2D treatment in future, leading to a whole range of new materials with strange properties.