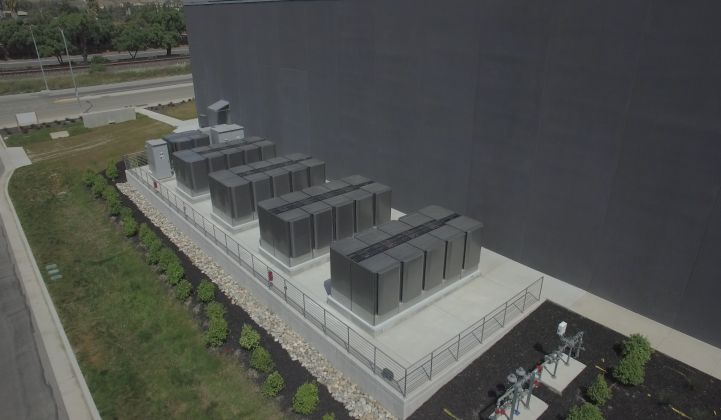 Fuel cell builder Bloom Energy rang the opening bell on the New York Stock Exchange and celebrated its initial public offering this week, an event more than 15 years in the making. It’s a milestone that most every entrepreneur dreams of experiencing.

Bloom sold 18 million shares at $15 each, at the height of the price range, generating $270 million and valuing the firm at more than $2 billion. Shares closed at $25, up 67 percent on Wednesday, and fell back from that peak to finish Thursday at $21.01.

“The grid is less resilient and more costly”

Bloom execs spoke with GTM for a few minutes before the IPO quiet period resumed.

Matt Ross, executive VP and CMO, said the stock jumped because the market understands the story. Investors are seeing rapid growth, significant customer adoption and a 40x growth story in data center sales. He added that rapid adoption is driving costs down — an average of 29 percent per year over the last three years. At the same time, power density and efficiency are going up, in what Ross reckoned was a fuel cell version of Moore’s law.

Ross suggested that Bloom’s competition is not other fuel cell firms such as Fuel Cell Energy, but rather the electrical grid itself. Ross said his customers are looking for greater reliability and resiliency than the grid can provide, adding, “It’s rare that we see the other fuel cell companies.”

Bloom units run on natural gas, a fossil fuel commodity subject to price volatility. Ross said that the consensus among analysts is that “cheap and abundant natural gas is here for a very long time.” And it turns out that the reliability of the gas grid in the U.S. is 100 times more reliable than the 99.9-percent-reliable electric grid, according to Data Center Dynamics. Data centers need better reliability than the electrical grid can offer.

Mark Mills in Forbes observes: “Bloom rides the transformative abundance of natural gas from shale,” adding that “power reliability is the ascendant metric in a highly electric-dependent economy.”

As GTM has reported, the other fuel cell firms — Ballard, Plug Power, Hydrogenics, and FuelCell Energy — have had difficulty producing profits over their respective lifespans as public companies. Somehow, they’ve trained their shareholders to not anticipate profitability as part of the business plan. If you look at the financials of the publicly traded fuel-cell firms, the story remains as stark as ever. This is a lackluster, loss-filled business. It’s been like that for decades.

Bloom had a total deficit of $2.3 billion as of March, and its S-1 admits that the company “will incur net losses on a GAAP basis for the foreseeable future.”

Customers: Bloom’s customers include 25 of the Fortune 100 companies such as Adobe, FedEx, Staples, Google, Coca-Cola and Walmart.

Concentrated geography: Bloom has installed most of its fuel cells in California, where the Self-Generation Incentive Program subsidizes the upfront cost.

PPAs? Nope. Over the past two years, Bloom has moved away from PPAs, leases and managed services in favor of pursuing direct sales to customers.

Bloom is not a cleantech company

GTM has covered Bloom Energy for more than a decade. But despite Bloom’s marketing and positioning, it isn’t really a cleantech company. It’s a heck of an interesting technology company, and it’s made advances in fuel cell costs and efficiency. But from an emissions standpoint, it’s just a bit cleaner than a gas turbine or about the same as a microturbine used in CHP mode. And it runs on fossil fuels.

It’s definitely distributed power, but it’s certainly not renewable — even if it absorbs subsidies intended for renewable technologies.

The Bloom Box is a natural-gas-consuming fuel cell for high-reliability niche power applications. That niche just happens to be a multi-multi-billion dollar market. Data centers alone purchased $17.4 billion of electricity worldwide and $3.3 billion in the U.S., according to Technavio. There’s a real big business here.

Despite the size of these markets, and despite the imminent profitability claims of Bloom, the S-1 lifts the veil, and the once-mysterious Bloom still has the lossy financials of every other fuel cell company. Nevertheless, Bloom’s growth story, cost reductions and improvements in efficiency and power density make it the best candidate for breaking the fuel cell curse.