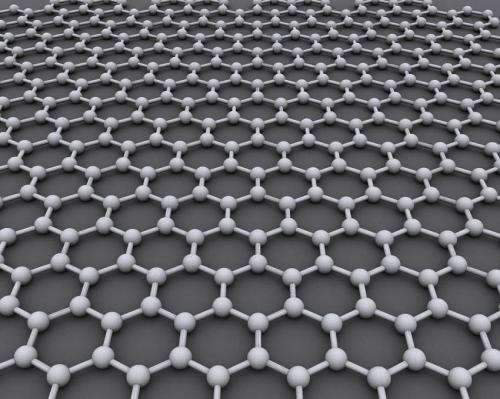 Following the isolation of graphene in 2004, a race began to synthesize new two-dimensional materials. These are single-layer substances with a thickness of between one atom and a few nanometers (billionths of a meter). They have unique properties linked to their reduced dimensionality and play a key role in the development of nanotechnology and nanoengineering.

An international group of researchers, including Brazilian scientists affiliated with the University of Campinas (UNICAMP), have succeeded in producing a new material with these characteristics.

The researchers extracted a 2-D material they call hematene from ordinary iron ore. The material is only three atoms thick and is thought to have enhanced photocatalytic properties. This innovation is described in an article published in Nature Nanotechnology.

“The material we synthesized can act as a photocatalyst to split water into hydrogen and oxygen, so that electricity can be generated from hydrogen, among several other potential applications,” said Douglas Soares Galvão, one of the authors of the study and co-principal investigator at CCES.

The new material was exfoliated from hematite, one of the most common minerals on Earth and the main source of iron, which is the cheapest metal, used in many products and above all to make steel.

Unlike carbon and its 2-D form graphene, hematite is a non-van der Waals material, meaning it is held together by 3-D bonding networks rather than by nonchemical and comparatively weaker atomic van der Waals interactions, which are noncovalent (they do not involve the sharing of one or more pairs of electrons by the atoms that participate in the bond).

Because it is a naturally occurring mineral, has highly oriented, large crystals and is a non-van der Waals material, the researchers believe that hematite is an excellent precursor for the exfoliation of novel 2-D materials.

Hematene was synthesized by the liquid-phase exfoliation of hematite ore in an organic solvent, N,N-dimethylformamide (DMF). Transmission electron microscopy confirmed the exfoliation and formation of hematene in single sheets with a thickness of only three iron and oxygen atoms (monolayer) and in randomly stacked bilayer sheets.

Tests and mathematical calculations were performed to study the magnetic properties of hematene. The results showed that they differed from the magnetic properties of hematite. While native hematite is antiferromagnetic, hematene is ferromagnetic, like a common magnet. In ferromagnets, the dipoles are parallel and aligned in the same direction. In antiferromagnets, the dipoles are antiparallel and aligned in opposite directions.

For a material to be an efficient photocatalyst, it must absorb the visible part of sunlight, generate an electrical charge, and transport it to the surface of the material to carry out the desired reaction.

Hematite absorbs sunlight from the ultraviolet to the yellow-orange region, but the charge it produces is very short-lived. As a result, it fades before reaching the surface.

Hematene photocatalysis is more efficient because photons generate both negative and positive charges within a few atoms of the surface, the researchers said. By pairing the new material with titanium dioxide nanotube arrays, which provide an easy pathway for electrons to leave the hematene, the scientists found they could allow more visible light to be absorbed.

“Hematene may be an efficient photocatalyst, especially for splitting water into hydrogen and oxygen, and could also serve as an ultrathin magnetic material for spintronic-based devices,” said the FAPESP RIDC researcher. Spintronics (or magnetoelectronics) is a new technology used to store, display and process information based on changes brought about by an electron’s spin, which is directly coupled to its magnetic moment.

The group have investigated other non-van der Waals materials for their potential to give rise to other 2-D materials with exotic properties. “There are a number of other iron oxides and derivatives thereof that are candidates for originating new 2-D materials,” Galvão said.