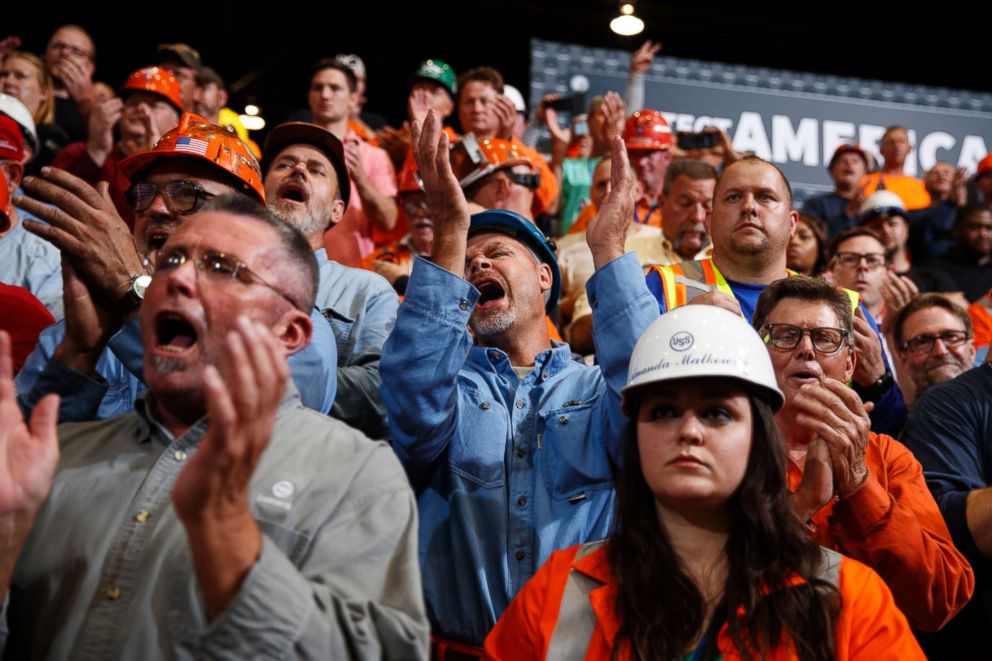 As thousands of American farmers get squeezed financially in President Trump’s escalating trade war, some corners of the industrial Midwest are celebrating economic rejuvenation.

“After years of shutdowns and cutbacks today the blast furnace here in Granite City is blazing bright, workers are back on the job and we are once again pouring new American steel into the spine of our country,” Trump told a crowd of steelworkers in Illinois on Thursday.

U.S. Steel — the second largest American steel producer — announced that it would restart the furnaces in Granite City, Ill., and call back 500 employees that were laid off in 2015 less than a week after Trump slapped steep new 25 percent tariffs on imported steel back in March.

“We had been praying for over two years, ‘Lord please open our mill,'” said Sandy Mifflin, whose husband Jeff was laid off when the mill closed down.

“The night when we got the call that they were making the announcement the next morning, Jeff had just had cancer surgery that day,” she said. “That night our prayer kind of changed a little bit: ‘Lord please give us four weeks to recover and you can open it back up.’ So we’re very thankful.”

Gratitude for President Trump — and the tariffs on foreign imports which have given the steel sector a boost — is common among steelworkers and residents in Granite City, where a sense of optimism has taken hold following an increase in business and jobs with the re-opening of the steel mill.

Families like the Mifflins also express a sense of relief thanks to steady income and restoration of health insurance.

Jeff Mifflin is a third-generation steelworker who began working at the Granite City mill in 1995, after nine years in the U.S. Marine Corps and a string of low-paying jobs. He had actually been laid off for several months once before, in 2009, and said he didn’t think the U.S. government had done much to address trade issues since then.

“We’re glad to be back, we’re proud to be a steel mill and proud to supply our country and not have to worry about the tariffs that are so low for the countries that ship into us,” Mifflin told ABC News.

“It’s just good to be back into the country looking up and helping us out, which we can turn around and help out the country in itself,” he said.

Other business leaders said that renewed activity at the steel mill has helped their own businesses — both financially and through the overall optimism around town.

Pat Notestine runs a company called Custom Steel Processing, Inc. near Granite City, which cuts down steel for customers who make it into other products and parts. Notestine said that the price of steel has gone up for him and his customers, but so has demand and cost savings from having steel available so close to his plant.

But Trump’s tariffs haven’t been welcome news for everyone.

The move to boost American steel producers, in turn, triggered retaliatory tariffs from China, Mexico, Canada and the European Union, which have hit other sectors of the U.S. economy hard — especially agriculture and industrial goods.

“Since that time we’ve been managing our business day to day in what we consider crisis mode,” said Chris Pratt, general manager of Mid Continent Steel and Wire in Poplar Bluff, Missouri.

Mid Continent Steel and Wire makes about 10 percent of the nails that are used in the U.S. at its Poplar Bluff facility, three hours away from Granite City. That is half of all domestically-produced steel nails.

Mid Continent has applied for an exemption from the tariffs, but Pratt said that the company may have to shut down before that exemption is approved. Company officials even took out a full-page ad in the local paper, asking Trump to visit the factory when he was in Kansas City and see firsthand how important the facility is to the community.

“Its a pretty somber feeling out there,” Pratt said. “We have completely idled one facility and when you walk into that facility to hear nothing, see nothing moving, hear nothing and all you see is cobwebs growing.”

David Dollar, a senior fellow in global policy and economic development at the Brookings Institution, said Mid Continent is a good example of what could happen to manufacturing jobs if tariffs on steel and aluminum keep raising prices on domestic steel.

Dollar said that steel processing doesn’t require as much manpower as other industries that use steel or aluminum, like assembling cars or even soda cans. As those companies make less of a profit because steel is more expensive, they could end up laying off more people than steel companies hired.

In the even longer term, Dollar said, tariffs could result in lost jobs in the service sector because as people are laid off from manufacturing jobs or face the threat of layoffs, they’ll spend less money.

“We’ve gone through this before [and] it certainly doesn’t increase jobs on any net basis it usually loses jobs on a net basis because it makes the country poor,” Dollar said.

At least 27,000 other companies have applied for exemptions to the steel tariffs, lawmakers confirmed in a hearing last week.

Trump announced Wednesday that he agreed to work with the European Union to end the steel and aluminum tariffs but did not provide details or a timeline on when the tariffs will be lifted.