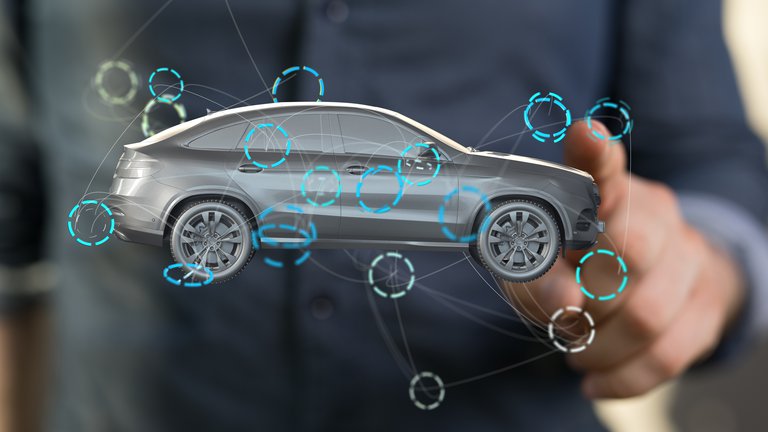 Some investors have watched the value of potential or emerging cobalt plays fall substantially in the last six months as the cobalt price retraced from its March high of circa US$95,000 per tonne to circa US$70,000 per tonne, levels not seen since December 2017.

It is worth noting in the chart below the compressed period in which the US$25,000 per tonne spike and subsequent retracement occurred.

It would be fair to say that there was a lot of hype driving the commodity to arguably unsustainable levels, but it is important to note the bigger picture.

As the following chart shows, two years ago, cobalt was trading in the vicinity of US$25,000 per tonne, indicating that its current price implies two-year compound annual growth of nearly 70 per cent. 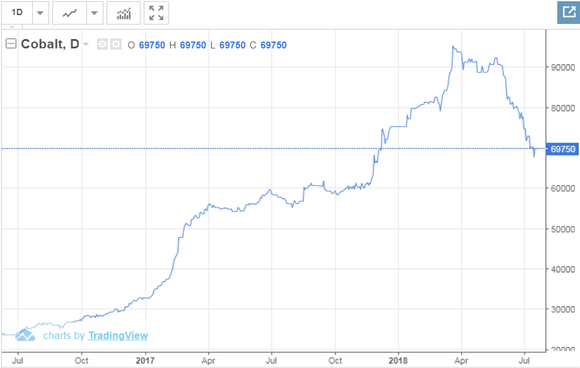 Looking at projections out 12 months to mid-2019, tradingeconomics.com is forecasting current prices to remain firm until the end of the September quarter followed by nine months of quarter-on-quarter declines of circa US$3500 per tonne.

This points to a price of US$60,428 in mid-2019, which would represent three-year compound annual growth of nearly 35 per cent.

However, if you are considering any cobalt stocks based on this growth figure, you should seek professional financial advice before making an investment decision.

To maintain this level of growth across a three-year period doesn’t tend to suggest that cobalt is in freefall or at the early stages of a sustained decline, moreso perhaps it ran too hard too quickly.

You have to remember that even though electric vehicles (strongly linked with cobalt demand) have been on the road for some time, it wasn’t until recently that the investment community joined the dots in identifying which commodities were worth chasing.

Even today, there is considerable debate as to whether investors are better off opting for cobalt, lithium, nickel, vanadium or graphite.

Are the fundamentals still in place?

While it has benefited from strong buying from forward-looking investors over the last 12 months or so, cobalt isn’t insulated from profit-taking.

Though it is impossible to determine what is fair value, analysts tend to be in accord that the key fundamental demand drivers are still in place with cobalt consumption expected to grow exponentially.

As cited in the research, projected battery consumption will account for circa 60 per cent of all cobalt demand in 2020, representing an increase of nearly 60 per cent in battery demand from 2016 levels (Darton Commodities, 2016).

It went on to say that growth in battery consumption is expected to principally come from increased electric vehicle demand.

Also, the rechargeable battery segment has become both the largest and potentially fastest growing end-use of cobalt.

The research noted that the use of lithium-ion batteries in the electric vehicle market has become the most important growth driver for cobalt demand.

However, it indicated that industrial and home grid energy storage systems like the Tesla Powerwall, are increasingly using lithium-ion batteries due to their charge acceptance, longer shelf life, reliability and lower total cost of ownership.

As explained in the video link, Powerwall is a home battery system that turns the home solar power system into an all-day resource.

Powerwall allows the consumer to store energy from solar panels when the sun is shining, so it can be used at night, or at some other time.

Even the big tech companies believe the electric vehicle outlook is strong.

They have invested billions of dollars over a 10 year period with a view to capturing the technological components end of the market, particularly in relation to self-drive vehicles.

Microsoft, Apple Inc and Alphabet Inc.  are developing the new age technologies required to provide driverless vehicles with the intuition, the safety awareness, the navigating ability and decision-making capabilities that have until recently been something only a human could provide.

Alphabet was one of the early movers, and while it is best known for its Google search engine, it has been working on self-driving technology since 2009.

Both Google and its self-driving car affiliate, Waymo have the same parent company in Alphabet Inc.

Demonstrating its commitment to not just being the first to deliver the technology, but also being the best so that it can dominate a niche fast growing market, Waymo has even built a city with roads, buildings and houses where it tests the cars.

This suggests that the underlying cobalt demand drivers are still in place, unless global tech giants have got it awfully wrong.

What’s happening at the big end of town

Weighing up their share price performances provides another dimension in terms of determining where the sector is heading.

As a precursor to the article she cited recent comments relating to forward projections by Benchmark Mineral Intelligence analyst, Casper Rawles, who said in part, “[W]e forecast battery demand for cobalt to go from 50,000 tonnes in 2016 to 80,000 tonnes by the end of 2020, and from a cobalt producer’s perspective supply needs to keep up with, or be close to, expanded demand.”

The market leader in terms of cobalt tonnes produced in 2017 is Glencore plc with production of 27,400 tonnes.

Applying the two year timeframe we referred to in relation to the cobalt price movements, the company’s shares more than doubled from just shy of GBP190.00 in mid-2016 to eclipse the GBP400.00 in January 2018. Even after the slide in the cobalt price, the company continued to trade in the vicinity of GBP400.00, and the recent slide to circa GBP330 appeared to mainly be related to the US Department of Justice’s demand for documents relating to possible corruption and money laundering. As can be seen in the following chart, this occurred at the start of July, prompting a one-day fall of 13 per cent in the company’s stock. While not having an operational impact on other miners, it did appear to have a short-term flow on effect with the likes of Rio Tinto falling from circa $84.00 to $78.30 in the ensuing week. 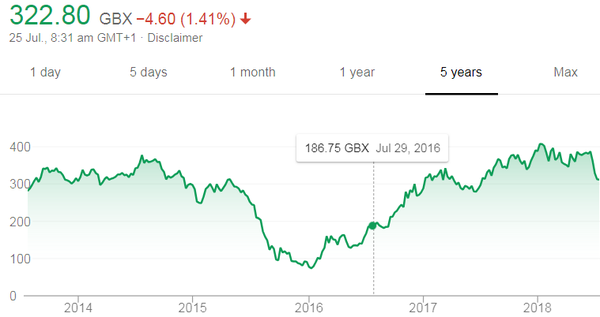 Events such as these tend to have an even more profound effect on microcaps and smallcaps as they are seen as less resilient in terms of navigating challenging conditions.

Although these stocks do remain speculative, so seek financial advice if considering any stocks in this sector for your portfolio.

China Molybdenum was the next largest producer in 2017 with cobalt production of 16,419 tonnes.

Once again, the chart tells the story with the company’s shares increasing from HK$1.76 at the end of July 2016 to a high of circa HK$6.60 in mid-March. The impact of the fall in the cobalt price was immediate and the company’s shares recently traded as low as HK$3.30 in early July before a sharp rebound of about 25 per cent in recent weeks. Given this company has shown the type of volatility which we have seen amongst Australian stocks, perhaps it is a company that the market has now identified as being oversold. Bearing in mind that the recent low still implied a share price gain of nearly 100 per cent relative to the July 2016 base, investors who targeted the stock on the back of the cobalt run may still have benefited even if they had walked away from the stock at its recent low. Conversely, for those investors who figured the horse had bolted, but finally recognised this as an opportunity to get on board the cobalt story they have made a quickfire 25 per cent. 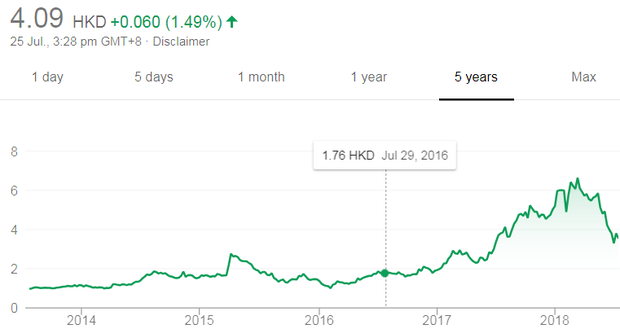 Vale SA takes third spot with production of about 5800 tonnes.

The company’s shares increased circa 150 per cent between July 2016 and May 2018 when they traded in the vicinity of US$14.60, up from US$5.75 two years prior. Vale shareholders have stuck by the stock and its current price of about US$13.80 represents a premium of nearly 10 per cent to its mid-March low. Consequently, on balance it would seem that share price volatility relating to the fall in the cobalt price is exaggerated, and now may be the time to wade back into some of those badly beaten down companies that were once market darlings. 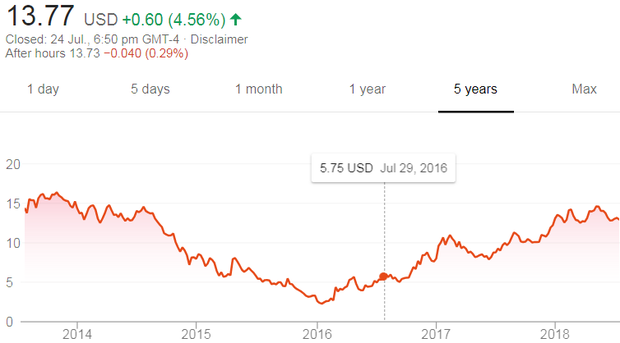 As we mentioned earlier, often smaller stocks tend to be hit harder by negative sentiment, so on Monday we will be looking at five early stage cobalt stocks that may be oversold.