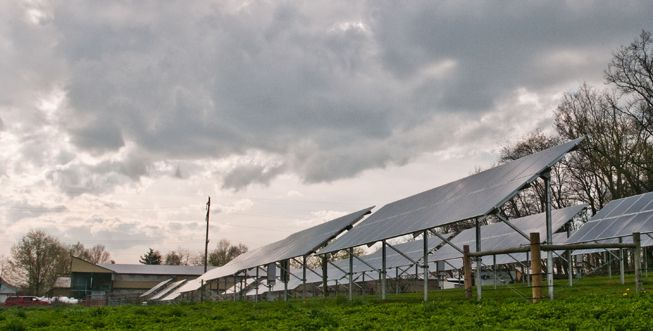 Solar panels are a terrific source of renewable energy … until it gets really cloudy.

This is particularly worrisome for areas where the skies are overcast more often than not, but researchers may have found out how to harvest the silver lining of cloudy days.

All it took was some genetically modified E. coli.

This isn’t the first time biology has been applied to solar cells. Solar cells make solar panels work; they absorb the sunlight and convert it to an electrical current. Biogenic solar cells have relied on extracting a natural dye produced by bacteria during photosynthesis for conversion to electricity. This process is expensive and toxic, however, and it can cause the very thing that creates the energy, the dye, to degrade and become less useful over time.

But researchers from the University of British Columbia decided to take a different approach, leaving the dye in the bacteria. They modified the E. coli so it would produce lots and lots of lycopene, the same thing that gives tomatoes their bright red color. Lycopene is a natural — literally — at harvesting sunlight to convert it to energy, and its color allows it to absorb more light even on cloudy days.

To test how successful this biogenic solar cell would be, researchers coated the modified E. coli with a semiconductor metal and then applied that mixture to a glass surface. They generated a current density of 0.686 milliamps per square centimeter, an improvement on the 0.362 achieved by others using biogenic cells.

“We recorded the highest current density for a biogenic solar cell,” Vikramaditya Yadav, a professor in chemical and biological engineering who led the project, said in a statement. “These hybrid materials that we are developing can be manufactured economically and sustainably, and, with sufficient optimization, could perform at comparable efficiencies as conventional solar cells.”

Researchers announced their biogenic cell in the journal Small.

Light at the end of the tunnel

Achieving a sustainable model with this will take time, however. The E. coli doesn’t survive the process, meaning the bacteria need to be replaced each time. If a process can be developed that allows the E. coli to produce lycopene indefinitely, well, that would be a major step forward.

“Our invention is a first-generation prototype that needs significant improvements before it can reach the levels of silicon solar cells that can deliver about 25 times the current density of the bacterial-based solar cell,” Yadav told Popular Science. “We don’t view our technology as a competitor to conventional solar cells. Not yet, at any rate.”
Still, the biogenic panels can help areas like British Columbia and Northern Europe where the clouds are a bit more present. These sorts of biogenic sources of light can also be useful in other areas, including mining and deep-sea exploration.