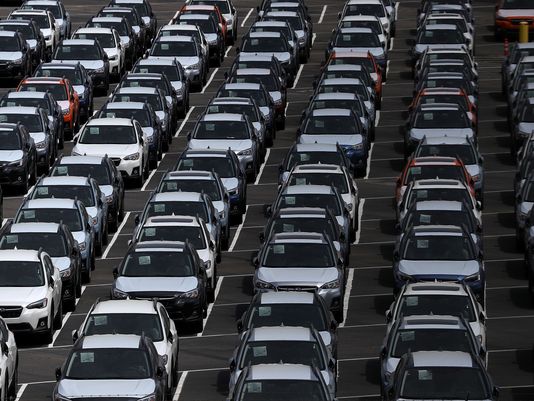 Automakers have been reaping a windfall from a strong economy and sales of big, profitable vehicles for the last several years.

But the profit bonanza may be coming to an abrupt end amid concerns about escalating costs stemming from a global trade dispute. And consumers may have to pay the bill in the form of higher prices.

President Donald Trump’s sudden imposition of steel and aluminum tariffs and the possibility of tariffs on imported and exported vehicles threaten to undermine the industry’s finances and increase prices for consumers.

His tariff threats have drawn support from the United Auto Workers union, which represents hourly U.S. workers for GM, Ford and Fiat Chrysler, and from U.S. steel companies.

But automakers are losing sleep over trade fears. As Trump gets closer to a potential 25 percent tariff on Europe-imported vehicles, the tariffs he already has imposed on foreign metal are beginning to take a toll.

The rising cost of commodities – largely due to Trump’s 25 percent tariff on imported steel – took a bite out of General Motors during the second quarter. Although GM turned a $2.4 billion profit for the quarter, the company on Wednesday reported $300 million in increased commodity costs, worrying investors.

Ford said Wednesday it earned a profit of $1 billion during the second quarter, down nearly 50 percent from the same period a year ago amid sluggish sales in China, the effects of the Trump administration’s tariffs and the costly disruption this spring of F-150 pickup production due to a fire at a supplier’s plant. It said the tariffs resulted in $145 million in higher costs and could rise to as much as $600 million for the full year.

The stocks of GM, Ford and Fiat Chrysler fell 4.6 percent, 0.4 percent and 11.8 percent, respectively, on Wednesday.

German automakers are also at serious risk of losses, while Japanese automakers, including Toyota, have warned of the impact, as well.

Reports of an agreement between the Trump administration and the European Union to achieve concessions on trade helped ease some fears late Wednesday afternoon.

Trump told reporters at the White House that his administration had agreed with the European Union to enter talks to eliminate most “non-auto” tariffs, including recent retaliatory measures.

Until a deal gets done, however, fears of increased costs and prices will linger.

Although GM gets most of its steel for American-made vehicles from the U.S., global price increases sparked by Trump’s tariffs have been inescapable.

Unlike GM, Fiat Chrysler has contracts in place to acquire steel at a fixed price through the rest of 2018. But the relief is probably limited. Commodity costs are likely to rise in 2019, Chief Financial Officer Richard Palmer said.

Who will absorb the increase? The options are the automakers, their suppliers, consumers or a mix of the three.

The estimated impact on vehicle prices of steel and aluminum tariffs have ranged from about $200 to $300.

To be sure, that amount won’t hurt the industry too much. Automakers continue to profit as consumers abandon passenger cars in favor of more profitable SUVs, pickups and crossovers. The average transaction prices for a new vehicle in June was $35,511, up 2.1 percent from a year earlier, according to Cox Automotive.

But potential price increases from Trump’s threatened vehicle tariffs would likely be much more damaging: about $5,000 per vehicle, according to LMC Automotive analyst Jeff Schuster.

U.S.-made vehicles shipped to Europe are currently subject to a 10 percent duty. Trump has argued the tariff imbalance is unfair. While industry leaders generally agree, they fear increased costs stemming from the trade rift.

“The European Union is coming to Washington tomorrow to negotiate a deal on Trade,” Trump said on Twitter less than a day before announcing the agreement to begin discussions to eliminate most tariffs. “I have an idea for them. Both the U.S. and the E.U. drop all Tariffs, Barriers and Subsidies! That would finally be called Free Market and Fair Trade! Hope they do it, we are ready – but they won’t!”

The threat of increased vehicle tariffs raises the possibility that automakers could shift production around the world to mitigate the financial impact. That could theoretically include moving production to the U.S. to avoid import tariffs. But analysts say more jobs would be lost than gained as increased prices hurt sales.

“We will have to evaluate ultimately whatever plays out and course correct from there,” Stevens said.

Most major automakers conduct final assembly of some vehicles in the U.S. But only Tesla makes all of its vehicles here – and that will change when the company opens a plant in China.

Ford imports only 21 percent of its vehicles, making it the leader in the percentage of vehicles assembled in the U.S., according to LMC Automotive. Honda is second at 37 percent, and General Motors is third at 39 percent.

By contrast, German automakers Volkswagen Group, BMW and Daimler import 84 percent, 70 percent and 58 percent of the vehicles they sell in the U.S., according to LMC.

To be sure, if negotiators resolve the trade rift with lower tariffs, it could ultimately benefit the major automakers.