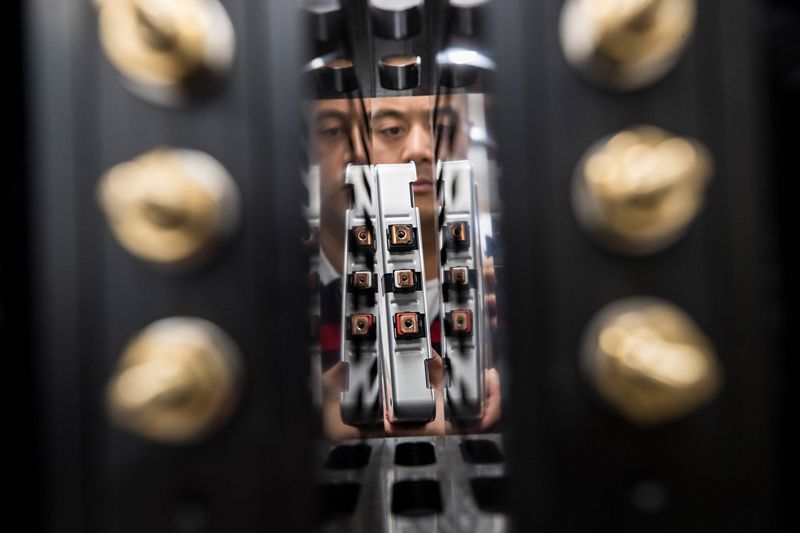 Reserves of cobalt and nickel used in electric-vehicle cells will not meet future demand. Refocus research to find new electrodes based on common elements such as iron and silicon, urge Kostiantyn Turcheniuk and colleagues.

Electric vehicles need powerful, light and affordable batteries. The best bet is commercial lithium-ion cells — they are relatively compact and stable. But they are still too bulky and expensive for widespread use.

The performance of rechargeable lithium-ion batteries has improved steadily for two decades. The amount of energy stored in a litre-sized pack has more than tripled, from around 200 watt hours per litre (Wh l–1) to more than 700 Wh l–1. Costs have fallen by 30 times, to around US$150 per kilowatt hour (kWh). But that still exceeds the $100 per kWh goal for affordability set by the US Department of Energy. And batteries that are powerful enough for an electric car (50–100 kWh) still weigh around 600 kilograms and take up 500 litres of space.

The pace of advance is slowing as conventional technology approaches fundamental limits. The amount of charge that can be stored in gaps within the crystalline structures of electrode materials is nearing the theoretical maximum. Projected market growth will not lower prices substantially — the markets are already large.

Worse, the materials used in electrodes, notably rare metals such as cobalt and nickel, are scarce and expensive. Surging battery production has almost quadrupled wholesale prices of cobalt over the past two years, from $22 to $81 per kilogram.

High demand and prices are already encouraging some producers to cut corners and violate environmental and safety regulations. For example, in China, dust released from graphite mines has damaged crops and polluted villages and drinking water1. In Africa, some mine owners exploit child workers and skimp on protective equipment such as respirators. Small artisanal mines, where ores are extracted by hand, often flout laws. Some companies, including BMW, follow strict policies to verify their cobalt suppliers2. Many do not.

Alternative types of electrode based on cheap, common metals such as iron and copper need to be developed urgently. In our view, the most promising candidates involve ‘conversion materials’, such as copper or iron fluorides and silicon. These store lithium ions by bonding chemically with them. But the technology is still at an early stage. Problems with stability, charging speed and manufacture must be overcome.

We call on materials scientists, engineers and funding agencies to prioritize the research and development of electrodes based on abundant elements. Otherwise, the roll-out of electric cars will stall within a decade.

Lithium-ion batteries work by shuffling lithium ions between two electrodes. Ions flowing from the anode to the cathode discharge a current, which powers the car. The lithium ions flow back when the battery is recharged.

In commercial cells used today for electric vehicles, the lithium ions are held in tiny voids within the crystals that make up the electrodes (these are known as intercalation electrodes). The anodes are typically made from graphite and the cathodes from metal oxides. Common oxides include lithium nickel cobalt aluminium oxide (NCA, commonly LiNi0.8Co0.15Al0.05O2) or lithium nickel cobalt manganese oxide (NCM, often LiNi0.6Co0.2Mn0.2O2 or LiNi0.8Co0.1Mn0.1O2). A lithium-ion car battery with a 100 kg cathode requires 6–12 kg of cobalt and 36–48 kg of nickel.

The prices of metals reflect demand, supply and the costs of extracting them from ores. Cobalt is pricey because it is rare and highly sought after. It requires capital-intensive processes to produce it, involving roasting, flash smelting and the consumption of poisonous gases3. Cobalt is often a by-product of copper and nickel mining, and can also need separating from other metals.

Few cobalt mineral deposits are concentrated enough to be worth mining. Most deposits contain just 0.003% of the metal; more than 0.1% is needed to achieve prices of $100 to $150 per kg (ref. 4). Production costs jump for poor ores because more rock must be processed (see ‘Metal prices’). Thus, only 107 tonnes of cobalt out of 1015 tonnes potentially available in Earth’s crust are profitable to extract5. Similarly, only 108 of 1015 tonnes of nickel reserves are commercially viable5. 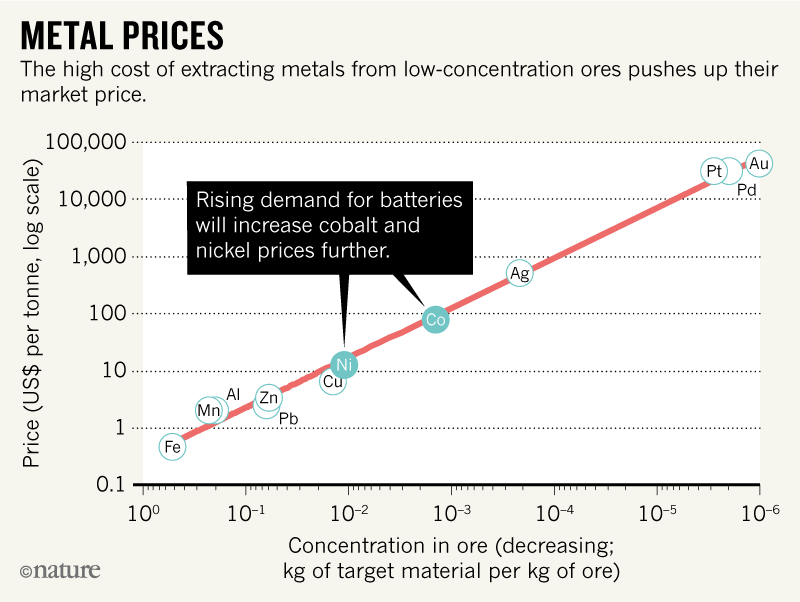 Cobalt-rich minerals are found in just a few places6. The Democratic Republic of the Congo (DRC) supplied more than half (56%) of the 148,000 tonnes of the metal mined worldwide in 2015 (ref. 6). Most of this goes to China, which holds stockpiles of 200,000 to 400,000 tonnes6. Australia hosts 14% of the world’s cobalt reserves but has yet to exploit them fully. Cobalt has been extracted from the deep sea floor, but mining here would be too expensive, ecologically and economically.

Likewise, nickel production is dominated by a dozen nations. In 2017, Indonesia, the Philippines, Canada, New Caledonia, Russia and Australia together supplied 72% of the 2.1 million tonnes mined globally. Of this, less than one-tenth went to batteries; the rest was used mainly in steel and electronics. Nickel is cheaper to extract than cobalt, through a series of reactions with hydrogen and carbon monoxide7. Nonetheless, rising demand has boosted nickel prices by about 50% since 2015, from $9 to $14 per kg.

Both cobalt and nickel have suffered sudden price hikes and crashes. For example, disrupted Australian supplies, increased demand from China for steel and speculation by hedge-fund managers led to a five-fold surge in the price of nickel and a tripling of that for cobalt in 2008–09.

If nothing changes, demand will outstrip production within 20 years. We expect this to occur for cobalt by 2030 and for nickel by 2037 or sooner.

Car manufacturers and governments project that 10 million to 20 million electric cars will be produced each year by 2025. If each car battery requires 10 kg of cobalt, by 2025, electric vehicles would need 100,000–200,000 tonnes of cobalt per year — most of the world’s current production. Similarly, 400,000–800,000 tonnes of nickel would be required annually, or 20–40% of all the metal used today. More would be needed when trucks, buses, aeroplanes and ships become battery-powered.

Recycling cannot replenish supplies. Lithium-ion batteries last for 15–20 years, 3 times longer than the 5–7 years for lead-acid batteries. Refiners might exploit poorer quality ores, especially as prices climb. But greater processing costs would push the prices higher. Once supplies peak, we estimate that the price of an electric car battery could leap by more than $1,000. ‘Peak cobalt’ might be delayed by a few years if cathodes can be made using less metal. But cathode materials that use less cobalt, which are under development, degrade quicker and would need to be replaced more often.

The answer is to make lithium-ion battery electrodes from common metals, such as iron and copper. A kilogram of iron, for example, costs just 6–9 cents. The global iron reserves stand at 76 billion tonnes: easily enough to supply the billions of batteries that could replace today’s petroleum car engines.

Already, Chinese electric buses use conventional cathodes made from iron-rich materials such as lithium iron phosphates (LFPs; LiFePO4), which can survive many cycles of charging. But they are less efficient at holding charge than cobalt- and nickel-based cathodes (see ‘Energy advantage’). Twice as many iron-based cells8,9, at nearly twice the cost, are needed to drive the same distance. 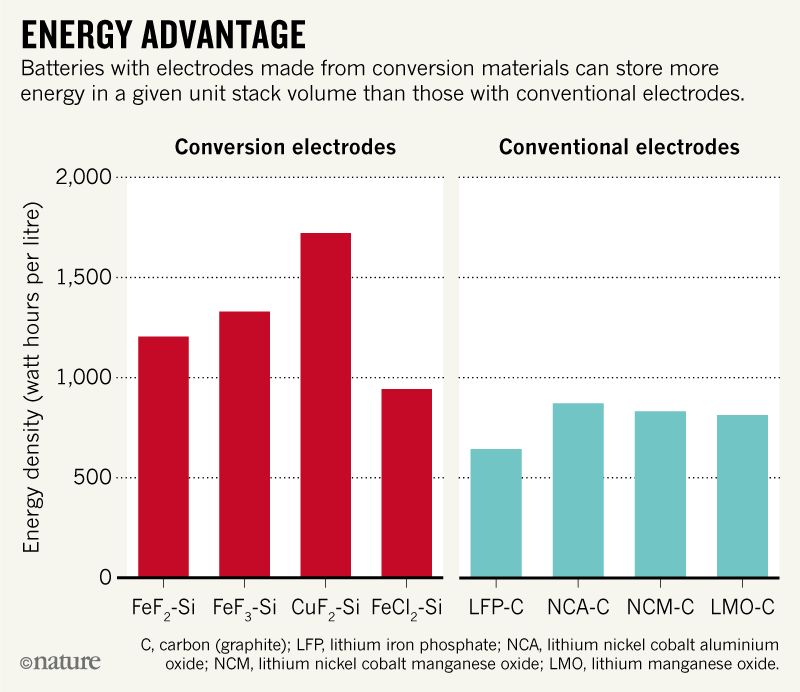 Equally inefficient are commercial electrodes made from another common metal, manganese (such as lithium manganese oxide or LMO, commonly as LiMnO2 or LiMn2O4). Earlier this year, a cathode (based on lithium manganese niobium oxyfluoride) was demonstrated in the lab that could almost match the energy storage capacity of cobalt- and nickel-based materials10. But a high voltage is needed to charge it, making it unsafe for use in vehicles.

The most promising alternative, in our view, is to use conversion materials in electrodes. Copper and iron fluorides and silicon react with the lithium ions. A transition metal in a conversion cathode can host up to six times more lithium atoms than one in a standard cathode. Such materials swell more to accommodate the extra lithium atoms. Cell designs must allow for this distortion.

Future anodes are likely to be based on silicon. It is produced from sand and stores nearly ten times more lithium ions by mass than graphite does. Combining conversion cathodes with silicon anodes in the next generation of lithium-ion battery cells could allow cells to store more than twice as much energy as the best conventional ones by volume, and more than three times by weight8,9. Half as many cells would be required to power electric vehicles, also halving costs, weight and volume.

Silicon-anode technology is advancing. Tesla already uses small amounts of silicon in anodes made of graphite for lithium-ion cells in its electric vehicles, and BMW announced plans to incorporate silicon-dominant anodes in its future electric vehicle batteries. Other companies, too, are developing silicon-rich anode materials. These include the Californian firms Enevate in Irvine, Enovix in Fremont and Sila Nanotechnologies in Alameda (G.Y. is a board member, shareholder and chief technology officer of Sila Nanotechnologies).

Metal fluoride cathode technology has yet to move beyond the lab9. Conversion-type batteries can take 20 hours to power up; this needs to be reduced to tens of minutes. They also require up to one-third more energy to charge; this should be no more than 10%. And their stability needs to be improved, from 5–500 cycles to 1,000–2,000 cycles.

Several technological breakthroughs are needed to secure the future of affordable battery-powered transport.

Government agencies and leading car manufacturers should fund this research, which will require billion-dollar investments. In our view, the best way to apportion this money is by targeting projects addressing key battery challenges, as the US Department of Energy’s Advanced Research Projects Agency-Energy (ARPA-E) does. Developing batteries free from cobalt and nickel should be one priority.

As promising battery materials and cell technologies emerge, funding should be refocused towards improving their characteristics and viability. Production processes and costs must be addressed. We expect that synthesizing conversion electrode materials will require different steps, including forming certain nanoscale structures. Treatments involving series of solutions and gases, for example, might be borrowed from other sectors such as food, pharmaceuticals, filtration and composite manufacturing.

Lithium-ion battery manufacturers have already invested billions of dollars in dozens of ‘giga-factories’ to boost the electric-vehicle market. With co-ordination, thought and planning, these can be set on a new path to deliver the next generation of affordable batteries.