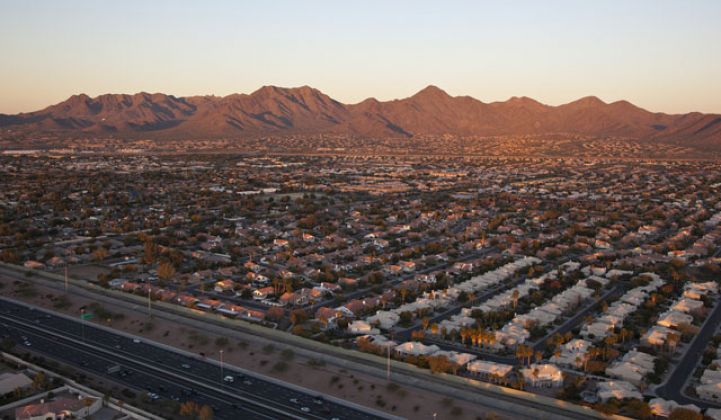 Residential solar provider Sunnova is returning to Arizona after a period of regulatory tumult, and this time, it’s bringing batteries.

The privately held company fast-tracked its SunSafe solar-plus-storage offering in the aftermath of Hurricane Maria, which left thousands of Sunnova customers in Puerto Rico without power even if their solar panels survived undamaged. Since then, the company has expanded its hybrid product to California, Massachusetts and now Arizona.

That puts Sunnova into competition with Sunrun’s growing BrightBox product, and whatever is left of the company that used to be SolarCity.

The company distinguishes itself from those bigger names in two key respects.

Sunnova sources from multiple vendors, including Tesla and LG Chem, which also supplies Sunrun’s batteries. Other suppliers are on the approved vendor list or in the works, but the company wouldn’t name them at this time.

Those choices allow for more optionality in how Sunnova approaches different markets or customers, and it avoids the months-long backlog that results from depending on a single name-brand manufacturer that falls behind in deliveries.

That outlasts the contractual support from other leading providers. Whereas Sunrun offers performance and maintenance support for leased systems but not for those that are customer-owned, Sunnova provides the operational support for both loan and lease deals.

“That’s something we’re trying to shift the mindset on,” said Director of Public Relations Kelsey Smith. “We’ll be there for the lifetime of that product.”

Sunrun geared its business model around owning customers’ systems and capturing their net present value and potential aggregation revenue, while branding its product as a path to energy freedom. Sunnova’s approach gives the customer more leeway to choose what payment structure works for them, without worrying about having to fix a faulty system on their own.

As for why Arizona, and why now, the answer lies in a confluence of battery affordability and the ongoing regulatory shake-out.

Approximately 2,000 Arizonans bought solar from Sunnova before it pulled out in early 2017 following the solar industry’s pitched battle over the state’s retreat from net metering.

Since then, the state has cleared up how utilities will compensate solar exports in the coming years, at rates lower than the old net-metering regime. Salt River Project imposed a demand charge, and Arizona Public Service introduced time-of-use rates for solar customers. Regulators in June postponed a decision on Tucson Electric Power’s solar rate plan.

Those decisions allow solar companies to plan for the future. Meanwhile, the addition of storage lets them build a business case in spite of reduced payments for solar put back on the grid, and demand charges or time-of-use rates only sweeten the deal.

In fact, the flurry of policy changes may create a psychological push toward energy self-sufficiency, said Meghan Nutting, Sunnova’s executive vice president of government affairs and communications, who fought in the earlier net-metering battle on behalf of SolarCity and The Alliance for Solar Choice.

“Having a solar-plus-storage offering for customers gives them options that circumvent the politics that are happening in Arizona,” she said in an interview. “Storage opens up markets that previously depended on net metering.”

With solar-plus-storage, Arizona residents can convert the state’s ample sunlight into electricity and use the battery to shift some of it into the evening peak hours, which are more expensive under time-differentiated rates. Unlike standalone solar customers, they will have backup power if the grid undergoes brownouts or blackouts.

Interestingly, Sunnova cannot guarantee any particular bill savings from its product. Rates will almost certainly change in the 25 years of the performance guarantee, and there’s no way of knowing exactly how they will change.

Arizona guarantees compensation for new solar customers’ grid exports for a only a decade, so rates could change after that.

“We don’t want to make promises about what the savings will be, although we feel confident that customer will be well taken care of,” Nutting said.

Utility rates are likely to go up as the traditional grid requires investment and upkeep, she said. Instead of gambling on what they will pay in the future, customers can lock in their energy supply now.

That’s a familiar argument for rooftop solar, and it’s different from offering a concrete timeline for return on investment.

Similarly, it’s unclear how many customers are willing to pay for backup power, which only comes in handy during a blackout. But, as Smith put it, “You can’t put a price tag on peace of mind.” Especially when it’s 110 degrees outside.

These questions of payback face all early providers of solar-plus-storage, but they won’t matter if the psychological pitch seals the deal.

In any case, the Arizona’s summer peak keeps growing. And plans for gigawatts’ worth of new gas peaker construction over the next 15 years will find their way into customer bills. Sunnova is hoping that pushes more customers to batteries.