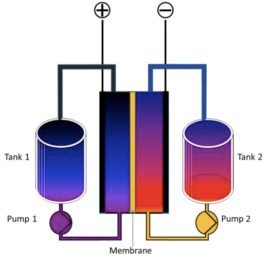 The quest to develop better batteries continues in research facilities around the world. The goal is to develop batteries that store more energy and cost less money. But that’s not all. To be commercially successful, they must have a long service life and be environmentally safe. Scientists at Stanford University believe they are close to a battery breakthrough which could meet all of those objectives and give a big boost to the goal of powering the grid with renewable energy.

Flow batteries are considered prime candidates for grid scale energy storage. In a flow battery, two liquids — one having a positive electrical charge and another having a negative electrical charge — are separated by a membrane that allows electrons to pass between both fluids while keeping them physically separate. Flow batteries tend to be larger in size than comparable lithium ion batteries, which makes them problematic for use in vehicles, but space considerations are less important for batteries designed to store electricity for the grid.

Until now, flow batteries have had several limitations that kept them from commercial viability. They had low energy density, required temperatures as high as 400º F to operate, and/or used toxic substances that were dangerous to the environment and cost a lot of money. But a team at Stanford led by William Chueh, an assistant professor of materials science and engineering, says they have solved one third of the flow battery puzzle.

The team has developed a liquid metal solution made from sodium and potassium — both of which are non-toxic, abundant and inexpensive — that acts at the anode for a flow battery. The best part is, the liquid metal solution is effective at room temperature. Theoretically, this liquid metal has at least 10 times the available energy per gram as other candidates for the negatively charged fluid in a flow battery, according to Science Daily. In the lab, the new anode material is capable of storing twice as much energy as any other flow battery currently available. So far, the new battery has a useful life of several thousand hours.

“We still have a lot of work to do,” says Antonia Baclig, a Ph.D. candidate who is part of the research team, “but this is a new type of flow battery that could affordably enable much higher use of solar and wind power using Earth-abundant materials.” The research report was published on July 18 by the journal Joule.

A low cost anode made from non-toxic ingredients that are readily available solves one third of the flow battery problem. But what about the other two pieces of the puzzle, the membrane and cathode? The team has had some success there as well. It has created a ceramic membrane made from aluminum oxide and potassium that keeps the positive and negative liquids separated while allowing electrons to flow between them. At first, the new ceramic membrane only performed its mission well at high temperatures, but by making the membrane thinner, the researchers were able to make it work at room temperature.

That leaves the third piece of the puzzle — the cathode. That part is still not resolved. The team found that water based liquids quickly degraded the membrane. They think a non-water based liquid will improve the battery’s performance and are currently investigating those options. “A new battery technology has so many different performance metrics to meet — cost, efficiency, size, lifetime, safety, etc.,” says Antonio Baclig. “We think this sort of technology has the possibility, with more work, to meet them all, which is why we are excited about it.”

As Endgadget points out, more powerful, less expensive storage batteries are critical to moving the renewable energy revolution forward. We can all jump up and down and wave banners proclaiming that the Earth needs renewable energy to survive, but people being what they are, only take action when the financials are favorable. Lower costs will force governments and corporations to abandon fossil fuels in favor of renewables.

We here at CleanTechnica all know that battery storage is expensive initially but can be economical in the long run because it saves utility companies the expense of building new conventional power plants. Not only that, once renewable infrastructure is installed, there is zero fuel cost to produce energy. Nevertheless, fossil fuel advocates continue to insist their way is cheaper. The more the cost of energy storage drops, the more the lies of the fossil fuel crowd will be exposed.