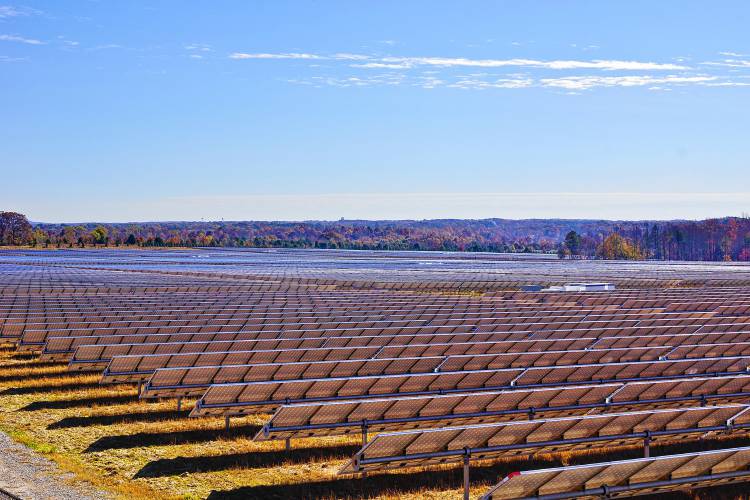 A proposed large-scale solar energy system off Montague and North roads drew about 30 people to Town Hall Tuesday night, where residents aired their concerns about its environmental impact and the need for further review.

A Planning Board public hearing held at Town Hall for a special permit application by CVE North America Inc. for a 20.9-acre solar energy system that would generate 4.98 megawatts of power saw a range of issues — from potential “eyesores” to getting an independent consultant to review the project’s design. Alexander Fox, business developer for CVE, and Meredith Savage, senior wetland scientist for SWCA Environmental Consultants of Amherst, represented the permit applicant.

The project would require 13 to 14 acres of forest to be cleared for the installation of 17,280 solar modules across two, 10-acre parcels of Agawam resident Kurt Meehan’s property. The solar modules would be 6 inches off the ground, standing at a little over 6 feet high, more than 3 feet wide, and less than 2 inches thick.

Planning Board member Thomas Hathaway recused himself from the hearing because he’s an abutter to the property.

Savage sought to address concerns from residents about the potential view of the solar system from the road.

She said that from Montague Road, it is just shy of 190 feet to the nearest corner of the solar array, and that in between, there is “a swath of 40 to 50 feet of mature forest, with trees on average of 60-plus feet high.”

“In terms of visual impact and actually being seen, this is one of the better sites,” Savage said of the project. “There is a lot of screening, a lot of existing mature forests between the roads and the possible vantage points in this field.”

From North Road, the closest point is about 200 feet, according to Savage. She also said the gently sloping elevation of North Road with about 520 feet of elevation and a high point of 550 feet “makes the view from North Road nearly impossible.”

Residents were also concerned with 11 utility poles that will need to be installed: five running along Montague Road to connect to the energy grid and another six to hold large utility equipment near where Montague and North roads meet.

The Conservation Commission has suggested running the lines underground beneath wetlands on Montague Road, which CVE is considering. As for the six utility poles for equipment, Fox said Eversource officials said they could not put it underground. Eversource has entered into an agreement with CVE for this project, according to the special permit application.

Town resident Sarah Mulvehill wanted to know what benefits the potential solar array would have for the town and its residents.

“In other towns that have had projects like this, they have received some discount on residential electricity,” she said. “I want to know what can be done to make this worth it for Westhampton.”

Fox said CVE and the town are negotiating a payment in lieu of taxes program, as well as providing discounted rates of electricity to residents who want solar energy but cannot install solar panels on their own property.

Planning Board member Donald “Pat” Coffey indicated that the town’s assistant assessor, Dolores Thornhill, had estimated that the yearly revenue from such a program would be $80,000 for the town.

A discount for residents would be on an individual basis, Fox said, and it would work on a credit system such as net metering.

Resident Patricia Lee Louise thinks that cutting down trees for a solar project is a bad idea, noting the impacts it could have on erosion in the area. Savage said the project will include several mitigation measures, including seeding of grass for erosion control and that the entire project is surrounded by erosion controls.

She also noted that the project is occurring on private land and its within the property owners rights to harvest the tress.

Other residents asked if the project could be smaller to avoid cutting so many trees down. Meehan, the property’s owner, said he wouldn’t accept a smaller-scale project for the site.

Resident Steve Buckowski, an electrician who has worked on several solar farms, voiced favor of the project. He said that although he’s never worked for CVE, the projects he’s been involved with in the past have always been concerned with environmental issues.

He said with the town looking at constructing a $5 million public safety complex, “we can’t keep going at the rate of spending.”

“It’s a good chance to get some income without a bunch of houses going up and it’s a renewable energy source,” Buckowski said. “I just want people to think about that. It’s a good opportunity.”

CVE is a French electricity producer that has subsidiaries in North America, Chile and Africa, and has targeted New York and Massachusetts because of those states’ policies promoting renewable energy.

The Planning Board voted to hire an independent consultant to review the project’s design. The project needs approval from the Planning Board, Conservation Commission and the state Department of Environmental Protection, as well as electrical and building permits.

The hearing will continue on Aug. 7 at 7 p.m. This will follow an Aug. 1 meeting between the town’s Conservation Commission and the applicants to address issues surrounding wetland protection.