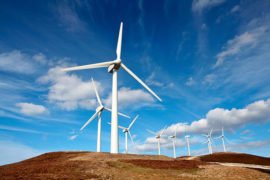 Researchers from the King Abdullah University of Science and Technology, in collaboration with the University of Notre Dame, have found that wind energy has “considerable potential” in Saudi Arabia, a country more well-known for its reliance upon and dominance in oil.

Determining the potential for wind energy requires either intense and widespread observational data or highly fine-tuned computer modelling — both of which have been absent for Saudi Arabia, one of the world’s leading sources of petroleum. However, as part of ongoing collaboration with the University of Notre Dame in the United States, researchers from the King Abdullah University of Science and Technology (KAUST) working as part of Marc G. Genton’s Research Group used high-resolution data to investigate the possibility of scaling-up wind energy in Saudi Arabia.

“Saudi Arabia has mostly relied on fossil fuels for its energy needs, but this is changing due to the rising energy demand resulting from industrial development, urbanization and growth of its population,” explained Wanfang Chen, a doctoral student on Genton’s team. However, scaling-up wind energy could provide a significant new source of clean electricity in the country, as well as a potential new industry for a country which simply won’t be able to hold on to its oil industry forever.

The conclusions from their simulations were better than expected.

“While we knew that Saudi Arabia has regions of high wind-power density, particularly along the Red Sea coast and over areas in the southeast and adjacent to the Persian Gulf, this work revealed considerable potential for wind energy in other regions during specific seasons,” explained Chen. Further, the MENA-CORDEX model also showed several high-potential areas that would consistently provide high wind-power density for many decades to come, making them worthwhile locations for the development of wind energy.

“Our study emphasizes the potential of using such models to infer spatio-temporal variations of wind resources under current and future climate conditions,” says Chen. “We are planning to expand this work to higher resolution simulations that will provide unique insights for wind farm planning.”

The research comes at the same time that Saudi Arabia’s Renewable Energy Project Development Office and the Ministry of Energy, Industry and Mineral Resources announced this week that they had received bids of between $21.30/MWh and $33.86/MWh for the 400 MW Dumat Al Jandal wind farm. Apparently, the Saudi Ministry of Energy is evaluating four bids for the $500 million project from pre-qualified consortiums led by ACWA Power, EDF Energies Nouvelles, Enel Green Power, and International Power, SA Dubai branch (ENGIE).