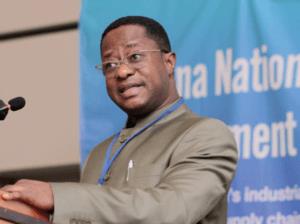 THE Minister of Lands and Natural Resources, John Peter Amewu has threatened to withdraw the license of Ghana Manganese Company (GMC) if it continues to flout the Contract Agreement it has with the government.

According to the Minister, GMC has failed to involve government in the pricing of the manganese ore that the company is selling to a Chinese firm.

He contended that GMC’s non-involvement of Government in pricing the commodity was a complete breach of agreement signed with the government.

At a meeting with management of the mining company at Nsuta last week Friday, Minister Amewu told them (GMC) that they had engaged in transaction with another firm, without the consent of government.

The minister said that government is being short-changed in terms of payment of taxes and royalties.

Minister Amewu directed management to furnish the Minerals Commission with details of the business transaction since government has 10 percent stake in the company.

Mr Amewu, was leading a delegation from the Ministry, Minerals Commission and Minerals Development Fund to Nsuta in the Tarkwa-Nsuaem Municipality of the Western Region, to familiarise himself with the operations of the GMC.

The Minister was unhappy with the performance of the firm regarding compliance with the local content laws and the Contract Agreement it signed with the government.

Turning his attention to other issues, Mr Amewu urged the Company to establish a mining refinery in Ghana to process the manganese ore locally to add value to the raw material.

Mr Benjamin Ato Quarshie, the Chief Operations Officer of GMC assured the Minister of management’s preparedness to comply with the directives and do the right thing, as spelt out in their contract with government.

He also pledged to support the government to rehabilitate Tarkwa-Agona-Nkwanta road, which had deteriorated due to hauling of manganese to the Takoradi Port.

He gave the pledge after Mr Gilbert Ken Asmah, the Municipal Chief Executive for Tarkwa-Nsuaem, had asked the mining company to rehabilitate the road from the Company’s site to Tarkwa Junction.

According to the MCE, the road has deteriorated because of its consistent usage by GMC to haul the ore to the Takoradi Port.