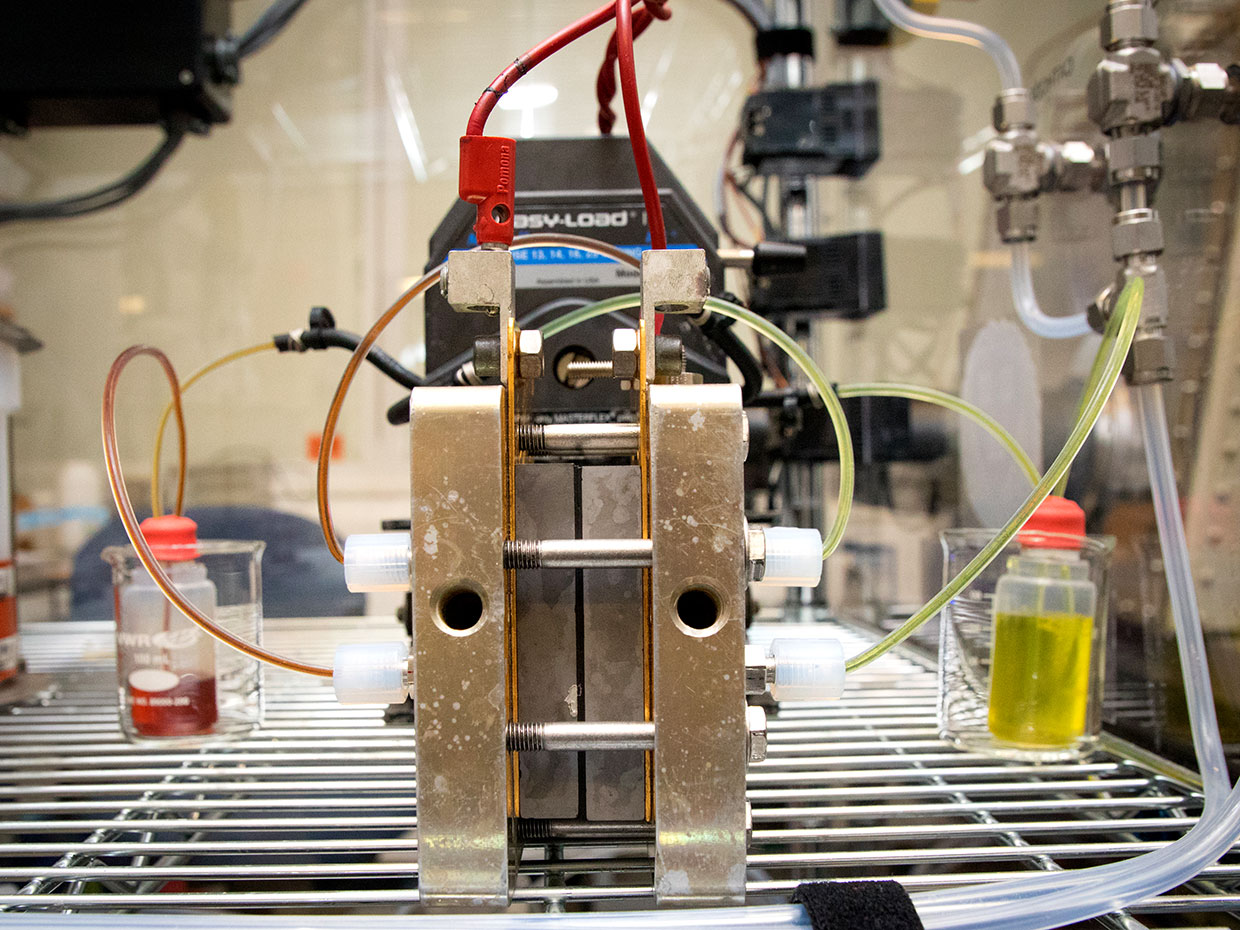 A new liquid battery that uses a so-called Methuselah molecule could lead to long-lasting and affordable storage of renewable energy for power grids, scientists at Harvard say.

The sun and wind are clean sources of energy, but they provide power intermittently. As such, utility companies want massive rechargeable battery farms that can store the surplus energy reaped from these renewable power sources for use when the sun is not shining and the wind is not blowing.

One possible solution involves flow batteries that use liquids to store and release energy. These devices replace a conventional battery’s two solid electrodes with a pair of liquid electrolytes. These liquids, contained in separate tanks, flow into the battery’s stack, and chemical reactions between the liquids—which occur across a porous membrane—discharge or recharge the battery.

The flow batteries furthest along the path to commercial development are based on vanadium, but they have limited potential for widespread adoption because of the element’s high cost and rarity. As such, researchers are exploring flow batteries based on potentially much less expensive organic molecules.

One drawback of the organic flow batteries produced to date is their organic molecules’ tendency to break down relatively quickly. This short lifespan has rendered them largely unsuitable for commercialization.

Now scientists have created an organic flow battery that outlives and outperforms its predecessors.

The Harvard team, which detailed its findings online in the 23 July edition of the journal Joule, started with the organic molecule 2,6-DHAQ, a kind of quinone. It’s an abundant, naturally occurring compound, key to biological processes such as photosynthesis and respiration. The flow batteries they made with 2,6-DHAQ lost 10 percent of their capacity after 100 cycles of discharging and recharging.

The scientists then chemically modified this quinone to “protect it from unwanted decomposition reactions,” says study co-senior author Roy Gordon, a Harvard chemist. Flow batteries made with this new molecule, named 2,6-DBEAQ, lost less than 0.001 percent of their capacity per cycle. They nicknamed 2,6-DBEAQ the Methuselah molecule, after the longest-lived figure in the Bible.

The scientists had previously demonstrated an organic flow battery with a relatively long lifespan but low voltage. In contrast, the new battery has a voltage of more than 1 volt, which the researchers say is commonly considered the threshold for commercial deployment of a flow battery.

Future research will explore what chemical reactions cause organic molecules in flow batteries to fade so the scientists can “redesign our chemicals to avoid these reactions,” Gordon says.

In addition, the researchers can add compounds to these organic molecules that make them more soluble in solvents, which would increase the amount of energy the flow batteries can hold.

“There are literally millions of possible organic compounds to consider, so I am confident that we will be able to find ones that can make better batteries,” Gordon says. “In contrast, traditional vanadium batteries are made out of the element vanadium, and no amount of research will uncover a better version of vanadium.”