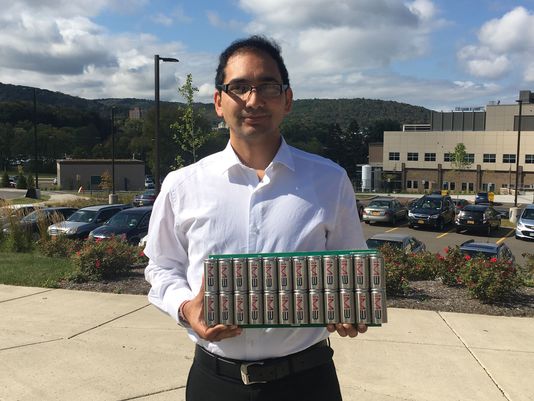 Shailesh Upreti is determined to re-energize manufacturing at a site that long served as IBM Corp.’s Endicott production hub.

His plan: Have more than 1,800 people producing lithium-ion batteries within the next eight years.

From a small start — 230 employed by 2021 — and proving his patented battery technology, he believes he can develop one of the nation’s leading green lithium-ion production facilities stateside, and then use the footprint to expand to India, the Middle East and Europe.

By 2025, he believes his Imperium3 consortium can be among the leading suppliers of batteries for electric cars and electric storage for sustainable energy producers.

“The DNA will be developed here, and ultimately it will be harvested in many jurisdictions,” Upreti said in a project update to about 50 people attending a late Monday afternoon meeting of Endicott Strong, a community group dedicated to rehabilitating the community that grew and flourished in the heyday of IBM and Endicott Johnson but has suffered with the decline of both.

Among his believers are some Fortune 500 companies: Siemens, Eastman Kodak and Magnis Resources Ltd., the owner of the second-largest graphite mine in Africa.

“Why New York? Why not New York?” he responded when asked about his robust plan to expand his locate his manufacturing hub in Endicott. The state has the technical infrastructure, the talent and is ground zero for the developing market for lithium-ion energy storage.

Endicott production was fast-tracked earlier this year when the company bought the entire contents of the former Alevo battery plant in Concord, North Carolina, for pennies on the dollar and moved the entire operation to Endicott. Published reports indicated Imperium3 acquired $200 million worth of assets for $5 million in a bankruptcy auction.

Upreti said 90 percent of the acquired equipment has been relocated to the Huron campus in Endicott.

Upreti has been on the Binghamton University campus for more than 10 years, researching advances in lithium-ion batteries under the guidance of professor Stanley Whittingham, who has gained a worldwide reputation for his work in energy storage.

Upreti’s early work has gained notice not only from the state’s energy research agency, which awarded him $500,000 as part of an effort to jumpstart new technologies on the BU campus, but also drew attention from other investors who see potential in his process.

Imperium3 is the first to graduate from Binghamton’s Start-Up NY program with plans to expand from a fledgling enterprise into a promising business with a sizable investment from established outside investors.

New York is assisting the project with performance-based incentives: a $4.5 million Upstate Revitalization Initiative grant and $3.5 million in tax credits. Based on projected capital investments, the company is expected to also qualify for an estimated $5.85 million in state investment tax credits.

Charge CCCV, or C4V, the company with the intellectual property that serves as the core for Imperium3, has patented and refined methods of storing renewable energy and a method of extending the life of lithium-ion batteries.