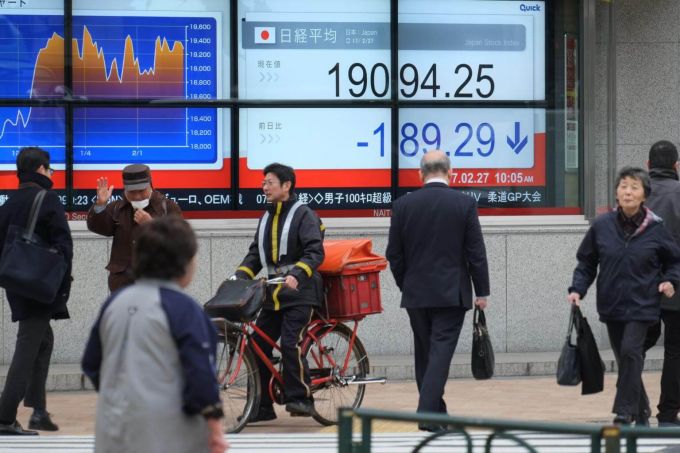 Japan’s Nikkei fell on Monday, after US President Donald Trump’s latest trade comments and speculation towards the Bank of Japan tweaking its massive easing scheme triggered a rally in the yen.

The dollar traded below 111.00 yen, having tumbled from the six-month peak above 113.00 scaled late last week after President Trump said the strong greenback put his country at a disadvantage.

Accelerating the dollar’s fall versus the yen were reports by Reuters and other media over the weekend that the BOJ could debate changes in its monetary policy at its upcoming meeting, with potential tweaks to its interest rate targets and stock-buying techniques on the table.

“The market is reacting as Trump’s comments stopped the dollar’s rise against the yen just as the US currency was rallying. There is an impression that Trump speaks randomly, but the timing was exquisite,” said Norihiro Fujito, senior investment strategist at Mitsubishi UFJ Morgan Stanley Securities.

“And the other factor weighing on stocks via the yen’s weakening is the various media reports on the BOJ. The reports have stirred unrest in the market, which was caught off guard, thinking that the BOJ would not budge an inch from its current stance.”

Fast Retailing Co, the operator of the Uniqlo clothing chain, was down 4.8 per cent, hurt by speculation that a potential tweak to the BOJ’s monetary policy could put the shares at a disadvantage.

The central bank has been buying exchange-traded funds (ETFs) as part of its easing scheme. Speculation has risen in the market that potential policy tweaks could involve the BOJ concentrating its purchases from Nikkei-linked ETFs, which Fast Retailing has a heavy weighing in, to the broader Topix ETFs.

Losses in Topix stocks were less pronounced relative to the Nikkei. Topix was last down 0.02 per cent at 1,744.57.

Banks, on the other hand, rallied on speculation that any tweaks to the BOJ’s interest rate target could eventually lead to higher yields.

The banking sector was the biggest gainer of Tokyo’s 33 sub-indexes.