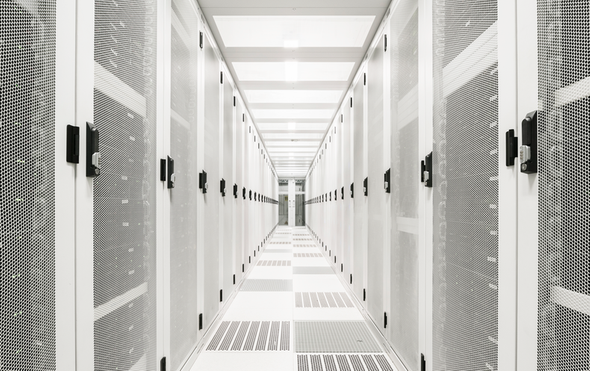 The cutting edge in American efforts to green the power sector can be found in a shipping container sitting in the parking lot of a sprawling Microsoft Corp. data center in southern Virginia.

A team of engineers assembled here to conduct a series of tests to simulate the interaction between a data center and a grid operator. Their question: Can extensive battery systems installed at data centers like this one be used to help grid operators smooth out the small spikes and drops in electric demand that occur throughout the day?

It’s technical, tedious work, but the implications for the electric system are sweeping. If they succeed, power companies might not need to build new natural gas power plants. Directly powering data centers with the wind and sun becomes a real possibility. Microsoft engineers even talk about reimagining the way electricity is bought and sold.

“In the future, you don’t have a data center or a power plant. It’s something in the middle. A data plant, for example,” said Sean James, Microsoft director of energy research. “Where this thing isn’t just a load on the grid, it’s an asset on the grid. We’ve been doing a lot of calculations, working with partners to get it just right, but to see it actually going is a special moment for us.”

Technology companies have led a corporate rush into renewables in recent years, pioneering long-term contracts with wind and solar projects that essentially offset the emissions associated with their electricity consumption (Greenwire, April 20). But many firms, no longer content with merely offsetting their emissions, are moving on to the challenge of directly powering their operations with the wind and sun.

Google announced last year it had offset all of its emissions with renewable production and promptly embarked on an effort to match its consumption to renewable energy production.

A hallmark of that initiative is building renewable projects in regions where it operates, effectively greening the local electric supply. That marks a shift for Google, which had previously relied mainly on projects in wind-rich regions like the Great Plains and northern Europe to offset its emissions in other parts of the world.

“Corporate procurement is driving faster renewable development than we otherwise would have had,” said Andrew Levitt, a senior market strategist at the PJM Interconnection, a grid operator that oversees power flows for a 13-state region that extends from North Carolina to Illinois. “Increasingly, you’re seeing the sophisticated corporate companies seeking to match their consumption, hour by hour.”

The stakes are potentially enormous. Technology companies are large buyers of electricity. Google estimates its global power consumption is equal to the city of San Francisco’s. Demand associated with Microsoft’s Boydton facility grew by 24 percent last year, according to Dominion Energy Inc., the local utility. Dominion estimates that total data center demand in Virginia this year is growing at a rate of 18 percent compared with the previous year.

Microsoft’s battery project in Boydton is illustrative of how technology companies are finding new ways to green the grid. Data centers like this one are equipped with extensive battery systems to back up your photos, videos and favorite web-based news outlets in the event the power goes out. But most of the time they sit around gathering dust.

The essential question for Microsoft is whether a data center’s batteries can still perform their backup function while also providing a service for the grid.

Brandon Middaugh, a senior program manager for distributed energy at Microsoft, likens the system to a stranded asset, a valuable resource that is infrequently used. The company’s effort represents an attempt to get more value out of its investment while furthering its clean energy goals, she said.

“It’s about looking at all the backup resources that we’re already installing at data centers here and around the world and saying, ’What could we do to make these underutilized assets more of a resource for the grid and specifically a resource that could help with renewable resource integration and balancing?’” she said.

Batteries are an appealing option for the power sector because of the flexibility they provide. Unlike a natural gas peaker plant, which can take minutes to dispatch and often run on idle in order to better meet short-term spikes in demand, a battery can dispatch power instantaneously. That makes them potentially valuable resources to help smooth out sudden spikes or drops in power supplies.

It is also a key piece of the puzzle for bringing more renewables online. If, say, a cloud moves over a solar facility, a battery can be dispatched quickly to patch the shortfall in electricity production.

But although the cost of batteries has fallen in recent years, they still remain prohibitively expensive, especially if a company is using them for the sole purpose of meeting short-term fluctuations in power.

That’s why the allure of data center batteries is so strong.

“I think what it does is provide a stable grid as more clean energy comes online,” said Kyle Harrison, who tracks corporate energy strategy at Bloomberg New Energy Finance. “These companies are showing they have an in-depth understanding of energy markets, but they want to help decarbonize the grid while maintaining resiliency, security and all those other factors.”

There are other tangible economic benefits for Microsoft. Researchers at the University of Washington studied a Microsoft data center to see whether its battery system could be used for dual purposes like data center backup and grid services.

They concluded the company could cut its annual electric bill by nearly 11 percent by reducing energy use at times of peak demand and, at the same time, gain a new revenue stream by offering services to the grid.

To be sure, there are limits to what battery technology can provide in its current form.

A data center’s backup batteries can only dispatch power for a matter of minutes, making them a potential solution for short-term fluctuations in electricity, but less of an option for long-term storage.

The work is also preliminary. The tests being done in Microsoft’s shipping container are part of a pilot project with Eaton Corp., a power management company, and PJM.

But the early returns are promising. On a recent afternoon, a team of engineers piled into the container to watch the tests in action.

The container was packed with a pair of industrial-scale batteries, a set of computer servers and a secure internet connection, linking the container to the PJM Interconnection.

Every two seconds the batteries received a signal from PJM, telling them to either charge or discharge electricity from the grid. A graph displayed on a laptop tracked their progress. It showed two undulating lines, one tracking PJM’s signal while the other followed the batteries’ response.

A laymen could be forgiven for thinking the spectacle was rather bland. But Microsoft engineers like James could barely contain their excitement.

The initial results suggest the batteries are already more effective at responding to PJM’s signal than a traditional power plant, though room for improvement remains.

“I don’t know if you just see some lines, but for us this is like seeing a lightbulb turn on for the first time,” James said.