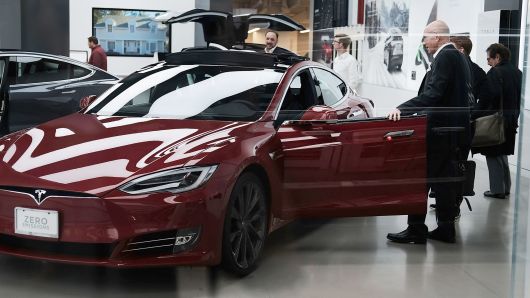 Tesla shares will fall dramatically the rest of this year due to its high valuation and rising competition, according to J.P. Morgan.

The firm reaffirmed its underweight rating on Tesla shares, saying other automakers may price their electric cars aggressively.

Tesla has a “highly differentiated business model, appealing product portfolio, and leading-edge technology, which we believe are more than offset by above-average execution risk and valuation that seems to be pricing in a lot,” analyst Ryan Brinkman said in a note to clients Friday. “We have highlighted more concerns regarding increased competition, including from automakers looking to use the sale of battery electric vehicles to subsidize their more lucrative internal combustion engine portfolio vehicles from a legal, regulatory, and compliance perspective, rather than trying to generate profit on the sale of these battery electric vehicles in and of themselves.”

Tesla’s stock fell 2.1 percent Friday. Its shares are up 3 percent so far this year through Thursday versus the S&P 500’s 5 percent gain.

The analyst is cautious on the company’s second-quarter financial numbers. It is slated to report its June quarter earnings results on Aug. 1, according to its website. Tesla said on July 2 that it reached its one-week production goal of 5,000 Model 3 cars during the last week of the June quarter.

“We continue to be concerned that free cash flow has the potential to be a larger outflow, given the fact that the much heralded production rate improvement,” he said. “Additionally, we worry about margin, given the potential for overtime, premium freight, and other expenses employed to ramp production in a seemingly inefficient manner.”