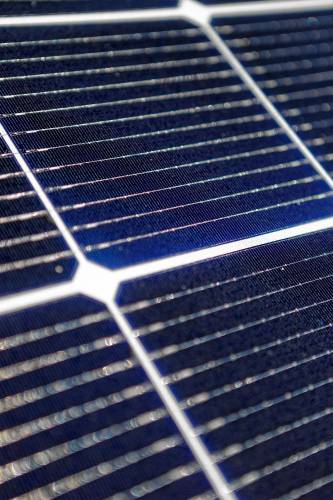 An international renewable energy company is applying to install a large-scale solar energy system off Montague and North roads.

It would use 20.9 acres of a 139-acre property, owned by Kurt Meehan of Agawam, and would generate about 4.98 megawatts of power for CVE North America Inc. The French electricity producer has subsidiaries in North America, Chile, and Africa, and has targeted New York and Massachusetts because of those states’ policies promoting renewable energy, according to CVE solar design engineer Matthew Gabor.

“This is a huge project in a small town,” Elvira Loncto of the town’s Conservation Commission said Thursday. “It’s a beautiful town and there are many that do not want it disturbed. There are those for it and those against. Our job is to deal with the water issues of this project.”

The proposed project falls outside the town’s Solar Photovoltaic District, and so needs a special permit from the town. The project needs approvals from the Planning Board, Conservation Commission and the state Department of Environmental Protection.

It also needs electrical and building permits from the town’s Zoning Board of Appeals. If the permits are granted this year, Gabor anticipates the project would take six months to complete next year.

The project would require 13 to 14 acres of forest to be cleared for the installation of 17,280 solar modules across two 10-acre parcels of Meehan’s property. The solar modules would be 6 inches off the ground, standing at a little over 6 feet high, more than 3 feet wide, and less than 2 inches thick.

Gabor said he could not disclose the project’s estimated cost because CVE has a non-disclosure agreement with the construction company.

Among the issues the Conservation Commission brought up during a hearing Wednesday were a stream crossing on the property and the way the solar energy system would connect to the power grid.

There is an existing crossing for a brook used for logging, Commissioner Peter Cleary said, and the developer is looking to improve it so that heavier trucks can use it during construction of the solar project. The commission wants to ensure that the water is not contaminated and that a vernal pool near the brook is not drained.

CVE has proposed constructing five utility poles along Montague Road for its electric cables to connect with the energy grid. The Conservation Commission has suggested running the lines underground beneath wetlands instead. The existing telephone poles on Montague Road would not be able to support the required cables and a second set of poles would need to be constructed. It would also require the clearing of trees there.

Conservation commissioners plan to visit the site with consulting firms to address those issues before the Aug. 1 meeting.

A solar site originator found the parcel of land in Westhampton through an algorithm that looked for a “suitable and safe place” to install a large solar energy system, Gabor said, and it was “luck of the draw” that the landowner was willing to lease it for the project.

There are six solar projects of similar size to be built throughout the commonwealth this year, including solar farms in Blandford, Orange and Palmer, according to the state’s Development of the Solar Massachusetts Renewable Target (SMART) program. There are over 160 submitted projects that would be larger than the one in Westhampton.

Meehan, a semi-retired truck driver, said he acquired the property at an auction in 1993 for a “good price,” and a local dairy farmer uses part of his land. He said he had been contacted by about 10 other solar companies with project proposals but CVE was the first to provide one in writing.

The solar company and Meehan have a 20-year agreement with options to extend for up to 40 years.

Gabor said there is a distinction between CVE and other solar developers that build systems and sell them to a third party. CVE will own this project once completed, which this means the company wants to maintain a good partnership with the town for years to come.

A proposed solar project at Intervale Farm in 2016 required upgrades to infrastructure that made the project cost-prohibitive, making this the first solar energy system in town if approved.

Other CVE projects approved by town and utility companies are in Berkshire and Hampden counties, but the company would not disclose the towns. They have four sites with utility approval, one in Hampden County and three in Berkshire County.

Eversource Energy has entered into an agreement with CVE for this project, according to the special permit application.