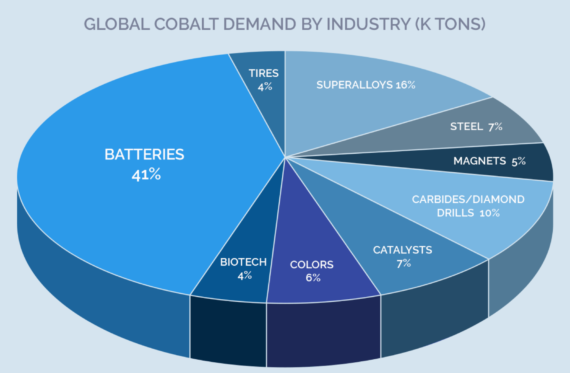 Panasonic, the exclusive battery cell supplier for Tesla, is making good on its promise to move toward cobalt-free batteries. According to Reuters, a Panasonic executive stated on July 12, 2018, that the company plans to halve the cobalt content of its mass-produced automotive batteries “in 2 to 3 years.” Not knowing the extent of global cobalt supply is a genuine point of concern and a potential bottleneck for much greater mass production of electric vehicle (EV) batteries. For this and other reasons, Panasonic has already significantly reduced cobalt content to about 10% in its nickel-cobalt-aluminium (NCA) cathode chemistry.

“At the research and development level, we’ve already achieved such batteries,” Yoshio Ito, the chief of Panasonic’s automotive business, said at a media roundtable. “But we need to go through various evaluation processes” before mass producing them, he said.

Tesla has collaborated with Panasonic to produce the world’s highest energy density EV battery packs since 2009, when the Japanese company signed an agreement to supply lithium-ion 18650 battery cells to Tesla. In June 2010, Panasonic invested about $30 million in Tesla. In 2014, Tesla began construction on its Gigafactory 1 in Sparks, Nevada, with cooperation with Panasonic and other strategic partners. When Panasonic became the exclusive supplier of battery cells for Tesla’s Model S, Model X, and Model 3 electric vehicles, their partnership was seen as a triumph for Panasonic over competitors such as Contemporary Amperex Technology (CATL) in China and LG in South Korea.

Cost reduction is the key for Tesla to make its Model 3 affordable for a large number of people and generate profit. That’s why Gigafactory 1 is so important for Tesla — it moderates the cost of Model 3 battery packs with economies of scale. The strategic partnership with Panasonic has been a key to Tesla’s dominance in the EV field.

Panasonic revealed some details about its collaboration with Tesla at the 2018 Consumer Electronics Show where the company described how its lithium-ion battery factory within Tesla’s Gigafactory handles production of 2170-size cylindrical battery cells for Tesla’s energy storage system and its new Model 3 sedan, which went into production in July, 2017. The high performance cylindrical 2170 cell was jointly designed and engineered by Tesla and Panasonic. It offers what Panasonic calls “the best performance at the lowest production cost in an optimal form factor for both EVs and energy products.”

Tesla and Panasonic share more than their lithium-ion battery collaboration — they both have a systemic focus on sustainability. Panasonic’s philosophy encompasses full awareness that humankind has a special responsibility to respect and preserve the delicate balance of nature. They have pledged to work towards the prudent, sustainable use of the Earth’s resources and the protection of the natural environment in the production, use, and disposal of their products.

Panasonic, which is contributing about $1.6 billion to Tesla’s $5 billion Gigafactory, “would consider additional investment if we are requested to do so,” Ito commented in early July, 2018. Ito’s comment refers to Tesla’s announcement that it will build its third Gigafactory in Shanghai, China, but has yet to secure commitment from Panasonic to build and operate.

Despite their name, most lithium-ion batteries also require cobalt and graphite to do their job of retaining and discharging electricity, and, while lithium and graphite are plentiful, it is cobalt that potentially has Panasonic and other manufacturers of battery-based products worried. As global production of lithium-ion batteries continues to increase, more and more cobalt is needed for batteries. Demand is expected to double over the next 8 years to 225,000 tons per year, announced the Institute for Geosciences and Natural Resources (BGR), an agency of the German Federal Ministry of Economics and Technology. Delays in the expansion of mines and further processing “can lead to considerable problems in supply,” said geologist Siyamend Al Barazi.

The cobalt content of lithium-ion batteries has become controversial for a variety of reasons, particularly costs. Battery makers have been frantic to reduce cobalt content in lithium-ion batteries as prices of the rare mineral have increased substantially in recent years. If it is not carefully managed, cobalt’s scarcity could result in slowdowns in the production and distribution of EVs at a time in which EV sales are expected to grow rapidly.

Commercially mined cobalt’s most abundant location is the Democratic Republic of the Congo (DRC), which is known for corruption and human rights violations, something that is problematic due to its cobalt “artisanal miners,” who are often children. Companies like Apple and Samsung have joined the Chinese-driven Responsible Cobalt Initiative, pledging to address the worst environmental and social consequences of the supply chain and its consequences on child labor.

Panasonic is trying to sign contracts with clients “in a way that allows the company to hedge risks of surging prices of the materials,” Ito remarked. Meanwhile, Benchmark Minerals, a specialist battery research company, estimates that over the last 6 years, Tesla has reduced the average amount of cobalt used in its vehicles by 60%, from 11 kilograms to 4.5 kilograms per car.

Tesla is in the planning stages of building an electric vehicle assembly plant in China. Production is scheduled to begin in 2 years, with the long-term goal of manufacturing as many as 500,000 vehicles annually. At the time of this writing, Panasonic has yet to receive a request from Tesla to cooperate in Shanghai, China, Ito acknowledged. While Panasonic currently runs a facility in Dalian, those batteries are square, unlike the cylindrical ones used by Tesla, so that factory wouldn’t be a good fit (pun intended).

It makes sense that Panasonic would be Tesla’s first choice for battery supplier due to its current exclusive arrangement with Panasonic. “Batteries are heavy and flammable, so there is little chance of shipping them by air,” Ito said at a briefing in Tokyo on July 12, 2018. “It would be ideal to have a battery factory next door to the assembly line.”

Electrive reports that, with Japan losing its ground as the world’s largest battery maker to relative newcomers such as CATL or BYD from China, the race is on for the next big jump in battery technology. Panasonic and Toyota, among others, are betting that solid-state batteries are the future as global companies attempt to look around the corner, beyond current lithium-ion technology. They are joined in this belief by 23 players in Japan that have formed a consortium led by New Energy and Industrial Technology Development Organization, or NEDO. NEDO previously engaged in solid-state battery research primarily with materials makers.

The research management group of the new consortium set a target date of 2022 for the core technologies to be ready for market. In the long term, the consortium aims to lower cost of solid-state batteries to 10,000-yen ($90) per kilowatt-hour by around 2030 which is about 1/3 the cost for existing lithium-ion batteries. Nikkei reports that Japanese companies hold an advantage in solid-state batteries. “A majority of patent applications on all-solid batteries are from Japanese companies,” Kei Hosoi, the NEDO project manager, confirmed.